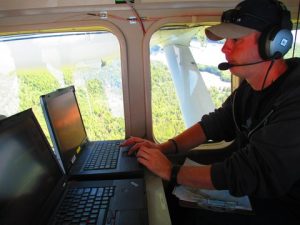 Fugro used three aircraft over around 650 days to acquire high res ALB data over 20,451km² of the Red Sea

Fugro has been presented with the Joint Airborne Lidar Bathymetry Technical Center of Expertise (JALBTCX) LCDR Peter Johnson Best Practices Award 2018, for its successful completion of a large, multi-year hydrographic survey in the Red Sea.

Challenging in size and scope, the vast survey project was finalised in December 2016. It covered over 113,000 square kilometres and resulted in more than 192 billion soundings. With more than one million exposure hours on the project, Fugro completed the work without a lost-time incident.

Both vessel-based acoustic multibeam and airborne lidar bathymetry (ALB) technologies were used to complete the survey. For the ALB component, Fugro performed approximately 650 days of aerial survey operations using three aircraft to acquire high resolution bathymetry data over 20,451 square kilometres of shallow water. It is among the largest ALB surveys ever undertaken.

“Fugro is honoured to have this work recognised with the LCDR Peter Johnson Best Practices Award,” said Mark MacDonald, Fugro’s hydrography director in the Americas region. “Involving teams from Fugro’s hydrographic centres of excellence in Australia, Germany, the United States and the Middle East, this survey in the Red Sea is a perfect example of how we successfully combine global resources, local knowledge and project management expertise to deliver excellence on even the most challenging projects.”

2018 marks the third time Fugro has received the LCDR Peter Johnson Best Practices Award. Previous wins include the inaugural award in 2009 for the company’s survey of the Torres Straits for the Royal Australian Navy, followed by a 2012 survey of the entire U.S. West Coast for the U.S. Army Corps of Engineers. The 2018 award was made during the JALBTCX annual Airborne Coastal Mapping and Charting workshop, held in Providence, Rhode Island, USA.