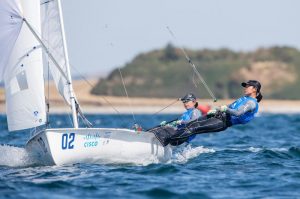 The Hempel Sailing World Championships Aarhus 2018 has its first medal race fleet in the women’s 470 with Japan’s duo of Ai Kondo Yoshida and Miho Yoshioka leading by five points.

Yoshida and Yoshioka, fifth in the Rio 2016 Olympics, were sixth in the only race possible on Tuesday. France’s Camille Lecointre and Aloise Retornaz, bronze medallists in Rio, won to close in second place. But Hannah Mills, the Rio Olympic champion and her new crew, Eilidh McIntyre, were furious after finishing 18th – their worst of the series.