Top Posts
MarISOT makes a splash at Aland’s Maritime Day
The 50 Inspiring Champions of the Blue MBA...
Monte-Carlo Diary: Hard to swallow at the hospital
Hot Port News from GAC
Assuring the quality of maritime learning: DNV certifies...
CSM focuses on quality tanker Management by launching...
LISW23 – A Decade of Innovation
A to do list for gender equality
Costa Venezia and Costa Deliziosa in Athens
vH2-Industries set to clear the oceans of plastic...
Agenda Released! Spinnaker Maritime People & Culture Conference
Burst of retail spending despite plummeting consumer and...
Home Ports & TerminalsLogistics Farewell to an ‘indomitable spirit’

Farewell to an ‘indomitable spirit’ 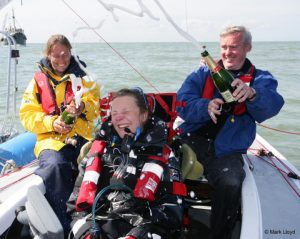 Southampton, United Kingdom, 28 August 2018 – GAC has paid tribute to record-breaking quadriplegic sailor Hilary Lister, who died at the age of 46 on 18 August. The GAC Group and its sailing logistics specialist arm, GAC Pindar, had supported and sponsored her sailing endeavours since 2010.

Lister suffered from the progressive condition reflex sympathetic dystrophy, eventually losing the use of her legs and arms. She learned to sail using pioneering ‘sip and puff’ technology in 2003 – something she often described as like being given wings. In 2005, she became the first quadriplegic to sail solo across the English Channel. Her other achievements included: being the first female quadriplegic to sail solo around the Isle of Wight, in 2007; the first disabled woman to sail solo around Britain, in 2009; sailing around the Kingdom of Bahrain in support of Bahrain Mobility International in 2010; and making the 850-mile Oman Sail/GACPindar Mumbai to Muscat crossing in 2014 with Oman’s Nashwa al-Kindi, the first Arab woman to complete the voyage. Lister’s indomitable spirit was recognised by a multitude of accolades including Woman of the Year in 2005 and 2006, The Royal Cruising Club’s Seamanship Award 2005, the Helen Rollason Award for inspiration in the SundayTimes Sportswomen of the Year 2007, the Cosmopolitan Superhero Award and the Vitalise “Woman of Achievement” Award in 2009. She was also shortlisted for the Rolex World Sailor of the Year Award.

After meeting Hilary in 2004, the founder of Team Pindar Andrew Pindar OBE formed a professional relationship under which the company supported her in exchange for appearances at sailing events. That relationship continued after Team Pindar and GAC came together to create GAC Pindar in 2010.

Andrew Pindar says: “Hilary will be sadly missed by us all. She was a true winner at life, who wanted to be treated the same as any able-bodied sailor and eschewed the prospect of sympathy or handouts. Over the years, she attended several GAC or GAC Pindar events including the final of the 2014/15 Volvo Ocean Race in Gothenburg, and she was always fun, and inspiring. She proudly wore our logos on her every voyage and will be do so on her final journey.”

GAC Group President Bengt Ekstrand adds: “It was a true honour to be associated with Hilary, who was a great inspiration to everyone who knew her and her achievements.”

The European Parliament recognizes the structural role of...