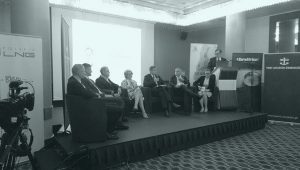 Over 150 participants gathered for the first day of this year’s Baltic Ports Conference, held on 6-7 September, 2018, in Szczecin. The event, hosted by the Seaports of Szczecin-Świnoujście Authority, has once again provided the participants with an up to date review of some of the most pressing matters currently relevant to the maritime industry.

Among the topics discussed were a thorough market overview and its impact on maritime transport and a closer look at various financial instruments supporting the development of port infrastructure.

After a set of opening speeches, featuring representatives of the Baltic Ports Organization, Szczecin-Świnoujście Seaports Authority, the Polish Ministry of Maritime Economy and Inland Navigation, as well as BPO’s new member – Polskie LNG, the speakers dived straight into the thick of things.

Bjarne Mathiesen, Senior Port Advisor at Mathiports, took on the role of the moderator, guiding the delegates throughout the day. Among the points made in his greeting speech, he underlined the need for the ports to focus on regional economy and trading conditions in order to remain competitive.

The event kicked off with a session dedicated to economy and trade in Central Europe and the Baltic region. An overview of the current state of the market, along an analysis of its impact on the European maritime transport sector, was delivered by a duo of speakers from Ramboll Management Consulting, providing an analysis of the megatrends currently driving global economy and port development. A positive trend in economic growth remains to be observed, with heavy investment in ports present. The speakers also mentioned a shift from outsourcing to insourcing and the highly relevant green agenda. Digitalization was mentioned for the first time during the day, as an important driver in global economy.

The audience’s attention was then shifted to a very intensely discussed topic, the Brexit. Mark Simmonds, speaking on behalf of the British Ports Association, gave a couple examples for challenges faced by the British ports on the way to Britain’s departure from the European Union, including possible difficulty in negotiating trade agreements and loss of EU funding (e.g. CEF). As for reasons for the decision to leave the Union, greater focus on port policy and revocation of some negatively received regulations were stated among other examples.

The session ended with a presentation by the General Sponsor of the Conference, Police Seaport, describing their function as a strategic base for the chemical industry in the region.

Economy remained one of the topics after the coffee break, specifically the role of ports in national economic development. Guided by Prof. Maciej Matczak, representing the Gdynia Maritime University, the delegates explored the significant influence of investments in seaports on the development of national economy, as well as growth in regions and cities the ports are located in. Differences in distribution of investment effects between national, regional and local socio-economic systems were also considered.

The session featured presentations by Kalmar and Actemium, respectively describing the impact of automation on port development and on-shore power supply technology as a key point on the agenda of an environmentally conscious port. An experts’ panel, including representatives from BCT Gdynia, DCT Gdańsk, as well as the Szczecin-Świnoujście Seaports Authority and the Port Authority of Centre-North Tyrrhenian Sea rounded-up the session.

The day’s last session covered one of the key topics for the transport sector in Europe – the Connecting Europe Facility (CEF) II proposal for the period of 2021 – 2027. The EU budget for the upcoming period and the surrounding discussion is of great importance for many ports, as it presents an opportunity to start many projects essential to their continuous development.

This highly interesting topic was tackled by Prof. Kurt Bodewig, European Coordinator for the Baltic-Adriatic Corridor. He emphasized that the goal is to have a system aligned to political priorities, based on simplification, transparency and flexibility, as over 30 million Euros of proposed allocation will be available to the transport sector, for the period of 2021-2027. Development of the core network, as well as its modernization are among the specific objectives. Prof. Bodewig also touched upon the Vision Zero concept, underscoring its importance. With digitalization being one of the award criteria, it was presented along environmental projects as a chance for comprehensive ports to get access to funding. Still, the core network remains the priority.

Mark Clintworth of the European Investment Bank explored incentives for cleaner EU shipping. He gave an example of one of the initiatives the EIB runs, the Green Shipping Guarantee Programme. The Programme was designed to support investments in greener shipping. In terms of eligibility criteria, sustainability remains one of the top of the list items. He also mentioned that digitalization is gaining increasingly more importance. In the end, it remains crucial to be careful about the projects chosen for investment, as they might become obsolete very fast.

The last presentation of the day was delivered by a representative of VRT Finland, further citing digitalization as a competitive advantage. According to the presentation, 3d data in maintenance brings with it a lot of benefits, including cost savings, budget facilitation and being proactive about possible damages.

Before everyone headed out for a wonderful evening dinner, representatives of the European Commission, ESPO, the Finnish Ports Association and the Ports of Turku, Trelleborg, Rostock and Riga offered their insights during a very active discussion panel. The conclusions from the panel will be presented in a future newsletter

Recognising the toll life at sea can have on seafarers’ mental health should not be underestimated, a Government minister has urged.