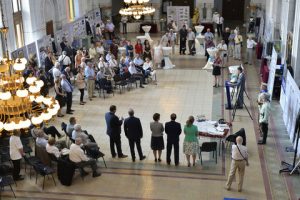 From the opening ceremony

Displaying an extensive collection of historical maritime memorabilia, Damen Shipyards Galati has opened an exhibition in the Lower Danube University in the Romanian city of Galati. The exhibition is part of the yard’s 125 year anniversary celebrations that began with the annual Shipbuilder’s Day festivities on 15 August.

The exhibition opened on 1 September with a ceremony attended by numerous invited guests including Damen Shipyards Group Board President Jason Bronscheer and the mayor of the city of Galati, Mr. Ionut Pucheanu. Containing various items such as photographs, postcards, maps, books and other special pieces, the exhibition – open until 30 December – thus reflects the rich maritime heritage that has been grown at the yard since its founding in 1893. 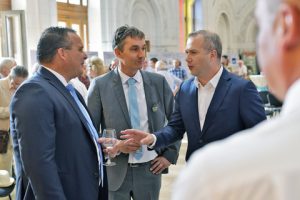 Some items, such a photo of the Romanian Navy minelayer NMS Amiral Murgescu, demonstrate shared aspects of Romanian-Dutch history. This vessel, for example, was built at the yard in 1941 to a Dutch design. Other items include two paintings painted in the 1950s by the then painter of the yard, Armin Muller, and a heavy duty diving suit dating back to 1913.

Shipbuilding operations on the site that is now known as Damen Shipyards Galati started back in 1893 when metalworking specialist and business entrepreneur Gheorghe Fernic founded a metal foundry and later in 1897 a shipyard. The shipyard quickly became internationally recognized for the complexity of the ships it was building, and so began a long and continuing tradition of shipbuilding in Romania.

“2018 is a very special anniversary year – we celebrate 125 years since the founding of this yard,” says Mr. Rino Brugge, the Managing Director of Damen Shipyards Galati. “We are very proud of Romania’s maritime heritage and the role that this yard played in Romania history – including the long series of ships delivered to the Romanian Navy.” 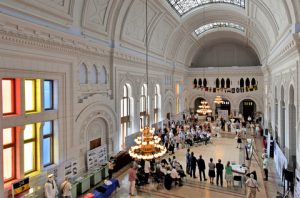 Another view from the opening ceremony of the historical exhibition

Target-2 enters the political sphere, In Conversation with Daniel Hardy