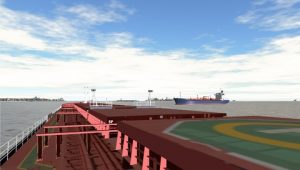 (LONDON, U.K.) – London Offshore Consultants (LOC) has announced that it has purchased its own in-house licence of BMT’s industry-leading navigation simulator, REMBRANDT.

The software which has been developed over a 25-year period, is already used by an impressive number of companies for applications such as training of deck officers, port navigational risk assessments, mooring and understanding complex manoeuvres. More recently, it has been adopted by a number of statutory marine accident investigation agencies, including the UK’s MAIB.

Paris Mangriotis, Engineering Director at LOC, comments: “REMBRANDT 3D uniquely complements existing accident data analysis software which LOC has been using for a number of years.  The two systems working together provide a very efficient visualisation of incidents to get the complete and accurate picture of what actually happened – a capability that the UK’s MAIB developed together with BMT.”

LOC will use REMBRANDT to deliver a number of services to its clients including: three-dimensional bridge point-of-view visualisation replays of incidents based on data from Voyage Data Recorders or AIS; manoeuvring investigations based on ‘what-if’ scenarios related to collisions, groundings and other casualties; navigational risk assessments for port feasibility and design studies and assessing complex manoeuvres such as tows of FPSO’s and other high value assets.

Phil Thompson, Managing Director, Ship and Coastal Dynamics at BMT comments: “It’s fantastic to see companies like LOC embracing REMBRANDT’s full capabilities.  We have dedicated significant time and resource to ensuring REMBRANDT continues to be the simulator of choice and remains versatile in the scope of work that it can support.”