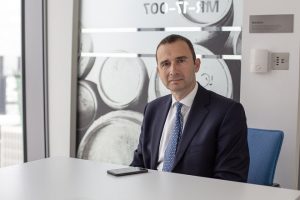 In accordance with the Articles of Association, IUMI’s Council formally elected Richard at their annual meeting which was held today, the final day of the IUMI annual conference in Cape Town. Richard, who has been closely associated with the global marine insurance market for 35 years, will serve a four-year term as President. He said:

“IUMI is the global voice of marine insurance and is the professional body that represents national and international marine insurers. It brings together marine and offshore energy underwriters from across the globe and is highly respected throughout the marine and insurance industries. It is an honour to be elected President, particularly as my nomination was put forward and confirmed by industry peers. I look forward to continuing the good work of my predecessor and advancing IUMI’s agenda in a number of areas over the coming four years.”

Richard has had a long relationship with IUMI having served on the Executive Committee between 2011 and 2015 and, before that, as a member of the Nominating Committee.

Richard succeeds Dieter Berg whose four-year term of office was completed today. On handing over the reins, Dieter said:

“Richard is the perfect candidate to take over from me and I wish him the very best in this demanding but highly satisfying role. During my term as President, I was fortunate to work with colleagues and the Secretariat to progress a number of initiatives. Together, we strengthened our Asia presence with the establishment of an IUMI Asia Hub in Hong Kong; we have grown our influence at a political and industry level; we have developed a growing education forum; and we have strengthened and modernised our external communications. I would like to thank my industry colleagues who have devoted so much of their time to IUMI and also to the Secretariat for their invaluable professional support over the past four years. With Richard now at the helm, I have every confidence that IUMI is in the safest of hands.”​