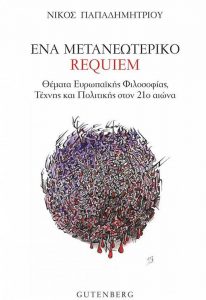 Topics of European Philosophy, Art and Politics in the 21st Century

I really loved this book. Ιt’s more like a how-to-make-sense-of-the-world manual, scientifically well-grounded, but also clear and easy to comprehend. The competent writer analyses many aspects of philosophy, art and politics in a promising way. This book contributes to a true understanding of life as it is today. Since the 17th century, Modernity has been having an active role in the “de-fascination” of the world, but now it seems to have reached its limits. “It is only at the end of things that we begin to understand them. And understanding them, we know that they are lost” Roger Scruton, England: An Elegy. Continuum, London 2006.

According to the book [A Postmodern Requiem, Topics of European Philosophy, Art and Politics in the 21st Century, Gutenberg Publishing, April 2017] a number of issues are put forward: Deconstruction, as an important feature in art and politics in the post- Marx era, the loss of collective identity (degradation of the ego), the return of myth as a spectacle, and the question whether democracy as conceived in the West can be exported. Especially in art, as Klee points out in his Approaches of Modern Art (1912) “Art arises, first of all, as a result of form questions” In Modernity, the concept of human liberation evolves gradually at the end, as Horkheimer and Adorno suggested in authoritarianism and oppression, as the twentieth century showed the other face, the dark side of Modernity and its contradictions.

As Professor Papadimitriou explains in his book: “[…] European art shows a unique quality, not found elsewhere. Artists are not simple observers of life and the world which they live in. They propose their own vision instead, rivaling with Creator. A look at the works of painters like Nicolas Poussin, Garofalo, Caravaggio, Dali and Picasso may surprise us. These painters are not only changing our vision of the world by recreating it, they also become active part of it by putting themselves inside their creations, singing them with their own pictorial presence […]”. Is humankind universal or simply globalized? How can the brutality of terrorism be explained? Why has the world not become more human, after all? What is the end of art? These are some crucial questions the answers of which are found in this excellent book. 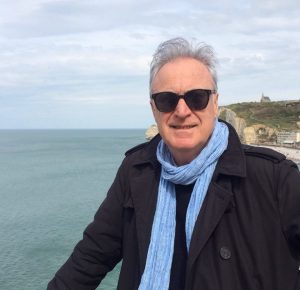 Nicholas Papadimitriou (PhD) was born in Athens. He studied law, philosophy and music in Athens, London and Paris (B.A. Law, University of Athens, Postgraduate Studies in Philosophy of Art, Docteur d’État in Arts et Sciences de l’Art, Université de Paris – Sorbonne, Music Composition, CNSMP). He is Associated Professor at D.F.L.T.I. Ionian University, teaching since 2002 Modern European Culture. He has also lectured at Iztapalapa and Nacional Universities of Mexico City, as well as at the Évry Val d’Essonne University in France and various other universities in Europe and the USA. Furthermore, he has given numerous music concerts both as a musician and composer. Since 2010 he is giving lectures at both the Strasbourg (ITIRI) and Montpellier III (Paul Valéry) universities about art, philosophy and politics in contemporary Europe (through the Erasmus exchange program). His recent publications in French, English and Greek pertain to modern Europe and the place of Greece in it. His books on European Modernity are published in Greece by the Dardanos/Gutenberg editions and in France by the Delatour-France publications.

Leaders in safety, offshore and keelboat racing to share perspectives in Sarasota

November events at the Hellenic Centre