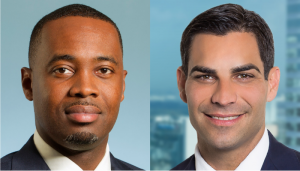 The mayor’s participation in the October 18 Bermuda Executive Forum follows a meeting last December in Miami between the two leaders. Miami-born Mayor Suarez, 40, a former city commissioner who garnered 86 percent of the electoral vote to win his first mayoral term last November 7, invited the Premier to his City Hall office a month later for an informal discussion in which they traded insights on leadership and discussed common agenda priorities, such as creating jobs, reducing income disparity and building resiliency against hurricanes and climate change.

“I look forward to welcoming Mayor Suarez to Bermuda’s Miami forum and continuing that discussion with him,” said the Premier. “Our island enjoys direct travel links to Miami, a gateway city with a growing economy that shares numerous common challenges and opportunities with Bermuda. We play a vital role in Florida through our market’s global business sector, which has helped communities throughout the region cover losses and rebuild after natural catastrophes. I believe there’s a lot to be gained by working together and exploring those mutual synergies, from fintech and tourism to re/insurance.”

Bermuda’s re/insurance carriers were expected to pick up at least 30 percent of total estimated (USD)$100-billion insured losses from the 2017 season’s record-setting hurricanes, Harvey, Irma and Maria. Florida was hardest hit by Irma, the costliest storm in the state’s history, with an estimated $50 billion in damage last September to homes, businesses and agriculture.

The complimentary full-day Bermuda forum at the InterContinental Hotel Miami will be the third cross-sector event produced by the BDA. Previous forums in London in 2017 and New York this spring each drew impressive turnouts of between 250 and 300 executives who heard panel discussions by Bermuda’s top industry and regulatory leaders detailing the island’s advantages to onshore communities and businesses.

The fireside chat between Suarez and the Premier will be the first session launching a packed day’s agenda designed for the Miami event, which hopes to attract investors, entrepreneurs and c-suite executives, as well as Latin American-focused clients. Experts will cover Bermuda’s offerings in re/insurance, asset management, high-net-worth services, family offices, cyber risk and healthcare liability, captive insurance, plus new fintech and digital assets industries.

“We are very proud to have both Mayor Suarez and Premier Burt participating in our Miami forum,” said the BDA’s Interim CEO Sean Moran. “This region is a major gateway to Latin America and has long been an important focus for Bermuda, with historic links and many commonalities. We invite investors and business leaders across US industries to join us and learn how Bermuda can help enhance their companies’ growth, raise capital, leverage opportunities and create value.”
or more details or to register for the October 18 Bermuda Executive Forum in Miami, contact the BDA at rsvp@bda.bm or go to http://bda.bm/bermuda-executive-forum-miami/
BermudaBermuda Business Development Agency (BDA)Miami
0 comment
0
FacebookTwitterLinkedinEmail