In the City exhibition at Stephen Lawrence Gallery, Greenwich University 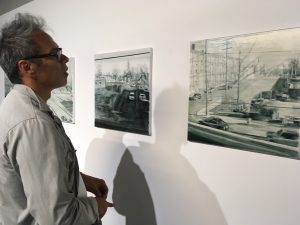 In the City exhibition at Stephen Lawrence Gallery, Greenwich University

Yes, you can find graphic quality amid the bleakness of modern city life, especially if you have the eye of a practised artist.

While many city dwellers shut their eyes to the grittiness of the grimmer aspects of urban life, others find in it a strange beauty and even harmony.

Nine established artists display their contrasting takes on the metropolitan miasma, in a new exhibition at Greenwich – one of the more pleasant suburbs within the capital’s sprawl, and one with a tradition as much naval as urban. 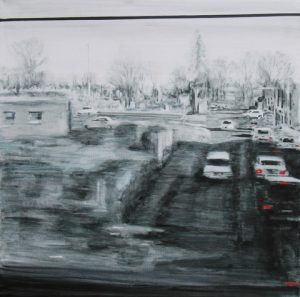 Each of these painters has a different way of responding to the urban environment, but whether their subject matter is drawn from cities in the UK, France, Canada, the US, Bangladesh, Myanmar, or India, much of it seems drained of humanity.

Well, that is the surface reality of cities today, and the more people who are crammed into them, the more individuality is threatened with evaporation.

The curators remind us that more than half of the world’s population now lives in cities. They say that artists have long represented city life in their work, although that is often from more genteel eras, say the street scenes and interiors of Dutch mastery, and from other periods of realism – British artists such as David Bomberg and Walter Sickert. 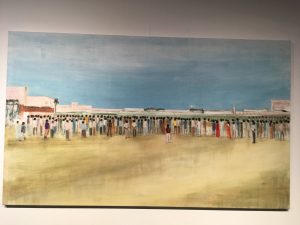 Notable, though, is the exhibition’s international scope which has registered the impact of global mobility and communications on artists’ sense of place, details an introductory note. “The artists give us oblique glimpses of their experience of different urban environments across three continents: Toronto and New York, Bangladesh and India, the UK and France, conveying real, imagined and remembered spaces. Commercial and residential buildings, transportation, and the natural world are all represented as are the inhabitants of the modern city.”

Technology has enabled a break by today’s creators with past practice of painting. They can transform and combine source material from different media such as photographs, images from newspapers, the internet and unprecedented access to drawings and sketches from the centuries and geographies.. 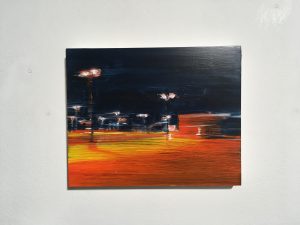 In her grisaille style, Marguerite Horner – who in 2017 won a prize awarded by insurance group MS Amlin for her work reflecting the theme of “continuity in an uncertain world”– presents four works, in oil on linen. They are titled The Corner, Confusion, Parked, and Tossed by the Wind.

Among those admiring Marguerite’s works was portraitist Tai-Shan Schierenberg, head of Painting at The Art Academy.

Other noteworthy contributions include Intermarche 3, from 2002, in oil on canvas by Jock McFadyen; Crowd from 2018 in oil and acrylic on canvas by Matthew Krishanu; A place to live 35’, from 2011, oil on plywood by Trevor Burgess.; The Void Land from 2013, gouache on rice paper by Tanmoy Samanta; Harbet Road North, from 2016, acrylic on canvas by Stephen Carter; 27-06-10 (Police Car), watercolour on paper by Mark Crofton Bell; Ola Verde, 2016, oil on canvas, by Lee Maelzer; and Rooftop carpark, 2017, oil on board by Barbara Howey. 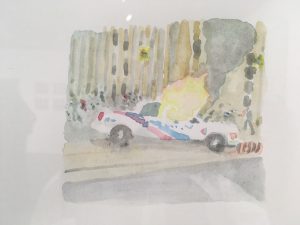 The exhibition includes a display of preparatory material offering an insight into the artists’ working methods.

The gallery is one of three exhibition spaces on the Greenwich campus: the other two being the Project Space and the Heritage Gallery.

The university founded the Stephen Lawrence Gallery in 2000 following the publication of the Macpherson report into the police handling of the inquiry into the racial murder of Stephen Lawrence, a black London teenager attacked in 1993 while waiting for a bus. Stephen’s mother, Doreen Lawrence, had been a student at the university. Earlier homes for the gallery included the former Woolwich Campus and the Maritime Campus. It is now in Stockwell Street in a new academic building in for the study of architecture, creative professions and digital arts. 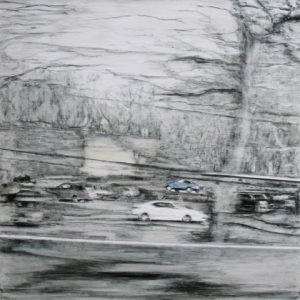 Tossed by the Wind. By Marguerite Horner.

The university says that with its “shop-front” location, the gallery aims to promote diversity in the representation of visual cultures through mainly curated group exhibitions featuring the work of young contemporary visual practitioners from a wide range of disciplines, including artists, designers, and architects.

In the City comes to the Stephen Lawrence Gallery after being on show at East Gallery, Norwich University of the Arts.

In the City is at Stephen Lawrence Gallery, University of Greenwich ,10 Stockwell Street, London SE10 until October 24, 2018.