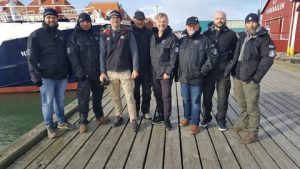 The Santi Find the Eagle expedition after setting off for the fifth time, has had to be curtailed because of rough seas. The team was on a mission to find the wreck of the famous submarine ORP Orzeł which patrolled under Royal Navy command during the Second World War.

One week into the mission the organisers made the difficult decision to postpone the expedition until 2019 due to severe weather conditions.

The expedition members reached Denmark on September 24, 2018. Specialised hydrographic search equipment, provided by the Maritime Institute in Gdańsk, was installed on the Nemo and tested at sea. The crew waited for weather conditions to improve. Unfortunately, they did not, and worse wind and sea conditions were forecast. Setting off would have proved very dangerous and potentially fatal. The only reasonable option was to postpone. 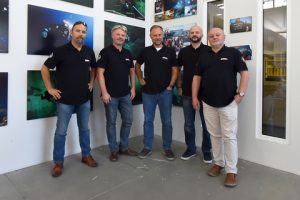 However, the week spent in the Danish port was not lost time. The team were able to conduct research and establish links with local historians and fishermen, gathering potentially very useful information about the location of unidentified wrecks, one of which might turn out to be the missing submarine. The team hope that the analysis of the new data obtained, further historical research and better weather will put them in a strong position to continue the search next spring, or possibly in November when, conditions permitting, the team may return.

The Orzel (the name means Eagle) went missing presumed lost in the North Sea between 23 May and 8 June 1940. This year’s search was due to  concentrate on an area 100 miles from Scotland and 200 miles from the coast of Denmark. It aimed to test the “friendly fire” hypothesis, according to which on June 3 1940 the ship fell victim to a Royal Airforce attack, having been mistaken for an enemy submarine.

After final preparations in Gdynia, the team left for the Danish port of Thyborøn from where they were to depart  on Monday. September 24 for the latest expedition in a series which began in 2014.

For the first time the team decided to  start the expedition from the coast of Denmark. Significantly, members of the team managed to reach and establish contacts with Danish fishermen who are the most active group in the North Sea. Their knowledge may turn out to be highly useful in selecting the search area. “This year we have expanded our search area, flew to Denmark, where we spent a lot of time with fishermen, looking for information that could shed new light on our operations,” said Tomasz Stachura, the project’s head.

The crew is sailing on a trawler, the Nemo, which is being specially adapted and equipped by the Maritime Institute in Gdańsk. It will be transformed for the duration of the expedition into a research ship. “We have world-class equipment, we have the right technical facilities, we are very determined, we must succeed,” declared Dr Benedykt Hac, head of the hydrographic team.

After the fall of Poland to the Nazis in 1939, the submarine undertook a perilous crossing of the Baltic and North Sea without charts and reported for duty under Royal Navy Command at the Scottish port of Rosyth.

Santi Find the Eagle is a long-term project. This is an initiative made up of a group of over a dozen dedicated people — professional divers, experts in the field of hydrography and historical research, who set up a foundation called Find the Eagle from private funds.

The project will continue until not only the resting place of the wreck of the Eagle is found, but also the reason for the ship’s sinking is uncovered. The project, whose main sponsor is the Gdynia-based company Santi, is gradually carrying out a detailed examination of the North Sea floor in areas where, according to accepted hypotheses, the wreck of ORP Orzeł is most likely to be found.

We do not underestimate the scale of the challenge in front of us but with meticulous research, calculations and some luck, we hope to solve the 78-year-old mystery of the disappearance of the Eagle. The Polish and British heroes who died serving together in the war at sea are not forgotten. Their bravery and dedication inspire us to keep searching.

The core work of the project is conducting research both during sea expeditions and in other months on land. The team devotes a lot of time searching for various sources of information to help narrow the search area, in the archives. And elsewhere “I still think that consistency is the source of every success, so I hope that our determination will finally lead to the discovery of the Eagle,” adds Tomasz Stachura.

Santi is one of the world’s leading manufacturers of clothing and diving equipment. In just a few years, the company from Gdynia has evolved from a local manufacturer of diving suits into a brand with an established position in the global dive equipment market.

The company is present on all continents, sells to nearly 40 countries, including to the US, South Korea, Canada, Australia, Brazil and the main European markets. Santi’s flagship products include dry diving suits and undersuits. The company is the originator and leading producer of diving heating accessories, such as heated gloves or vests.

For several years, Santi has been actively involved in organizing and supporting international research expeditions including Sedna, Under the Pole, and Elysium, and searching for wrecks around the world. In line with these endeavours, the Santi – Find the Eagle project was born, aiming to find the wreck and finally unravel the mystery of the disappearance of the Polish submarine.

Partners are Yellow Cargo Express (logistic support) and Instytut Morski Gdańsk (hydrographic support), and patronage comes from the president of the City of Gdynia, the Naval Museum in Gdynia, and National Geographic.

More background is at www.santifindtheeagle.com and there is a project promotion film at https://www.youtube.com/watch?v=lExIavrAWwE&list=UUSMMbSOX2pWwBpznedKPLMA