Vittoria Shipyard launches the “Rome-Moscow” tug for the Russian Federation 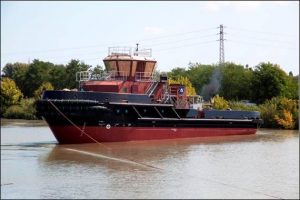 The Company President Duò said: “With this build we strengthen our positioning in the domestic and international harbour and oceanic tug market. We are now focussing on becoming a point of reference.”

It is called РИМ—MОСКВА (Rome-Moscow) and it will be deployed in the operations planned for the dismantling of the nuclear submarines that have been decommissioned by the Russian Navy: it is the latest tug in the fleet made by Vittoria Shipyard, the company that specialises in the design and construction of naval, paramilitary and commercial vessels.

The vessel just launched from the yard’s Adria facility in the waters of the Canal Bianco is the outcome of the Veneto Company winning a public tender launched in 2016 by the Italian Ministry of Economic Development (MISE) as part of the collaboration agreements between the Italian and Russian governments over the issue of handling radioactive waste, for a value of around 8 million euros.

Participants at the ceremony were welcomed by Luigi Duò, President of Cantiere Navale Vittoria, included Massimiliano Nobile, Director of the Project Mangement Unit at SOGIN (Società Gestione Impianti Nucleari) for the Italian Ministry of Economic Development, accompanied by his wife, Candida Russiello, who sponsored the launch, Giorgio Citterio, Project Manager at SOGIN, Dmitrii Gulak, First Deputy Director and Chief Engineer at SevRAO, the nuclear waste management division of the north-western state of Russia, Yury Kulikov, Deputy Director of the Newbuilding Department of the Russian Maritime Register of Shipping, and Danel Simonov, Italian Country Manager of the Russian Maritime Register of Shipping, together with the Cantiere personnel.
“In just two years we have designed and built two azimuth stern drive tugs for important foreign institutions”, said Luigi Duò, the President of Vittoria Shipyard, “thanks to the quality of our products and our engineering we have strengthened our position in the domestic and international market for harbour and oceanic tugs. The Russian authorities asked for particularly high standards, so the result we have reached with the launch of the ‘Rome-Moscow’ tug is a matter of pride for us, and confirms our conviction of being a point of reference in the tug market, which is a sector that is constantly growing and developing”:

The launch will be followed over the next few months by sea trials and the hand over of the vessel.

Vittoria has specialised over the years in building military and paramilitary vessels (especially patrol boats, interceptors, Search and Rescue [SAR] vessels and landing craft), workboats (in support of harbour and offshore platform work) and passenger transport craft. For the Adria-based yard, the РИМ—MОСКВА (Rome-Moscow) tug, together with Cap de Fer, which was designed and built for the harbour authority in Skikda, Algeria, represents the second historic order for an ASD-type tug (meaning it has an azimuth drive).

Vittoria’s latest offspring was designed to meet the high quality and safety levels required by the Russian flag, and which are needed to work in the difficult sea and weather conditions in the Barents Sea. In particular, this craft is actually been designed and built to be able to work up to minus ten degrees centigrade and ensure that, while docked at quay during the winter, its heating systems can cope with keeping the crew’s quarters warm even when the temperature falls to -34 degrees. The vessel was built and overseen in accordance with the Russian Maritime Register of Shipping (RMRS) regulations, and meets the Russian Federation Flag standards for on-board living and health conditions. Furthermore, the vessel has received ICE2 class certification.

The tug is around 32 metres long and was designed to be able to pull, push and escort vessels in harbours or at open sea, including when ice is present, lead other vessels in mooring manoeuvres and recover vessels in failure. The ship will have a bollard pull of 64 tonnes and a dynamic pull of 54 tonnes, and will reach a speed of 12.5 knots thanks to the two fast diesel engines linked to the two azimuth drives with variable pitch propellers.

The company, which was founded in Adria (Rovigo) in 1927 by the Duò family, designs and builds military, paramilitary, workboat,, commercial and transport vessels of up to 100 metres in length, and follows the highest standards, as shown by its holding the ISO 9001 certification (Quality management systems – Requirements), ISO 14001 (Environmental management system), OHSAS 18001 (Employee health and safety management system) and ISO 3834-2 (Automatic and manual welding). Since its foundation, Cantiere Navale Vittoria has built over 870 naval vessels, and over the years has had a number of contracts for vessels from the Italian Coast Guard, the Guardia di Finanza (customs and tax police) and the Italian Navy. The company has also been awarded a number of international contracts from Malta, Cyprus, Libya, Croatia, Slovenia, Tunisia, Algeria, Russia and Romania, as well as several other projects from some of the most important Italian oil & gas, transport and maritime construction firms.