On 25 September 2018, Sovcomflot’s Arctic LNG carrier Christophe de Margerie loaded the milestone 5-millionth tonne of liquefied natural gas for Yamal LNG, at the Port of Sabetta on the Yamal Peninsula in the far north of Russia.

The first train of Yamal LNG commenced production in December 2017, with the inaugural cargo of LNG also transported by Christophe de Margerie. In August 2018, another of Sovcomflot’s LNG carriers, Pskov, successfully shipped the first cargo of LNG produced at the second Yamal LNG train, which was commissioned ahead of schedule. 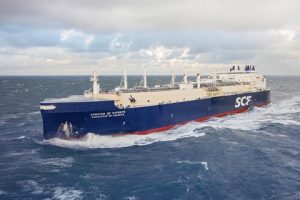 Christophe de Margerie (172,600 m3 cargo capacity) is the first in a series of 15 icebreaking LNG carriers ordered for the Yamal LNG project, to transport LNG year-round in the challenging ice conditions of the Kara Sea and Gulf of Ob. The vessel is capable of sailing independently through ice of up to 2.1 metres thick. She has been assigned an ice class Arc7, the highest ice class amongst existing merchant vessels. The power of Christophe de Margerie‘s propulsion system is 45 MW, a capacity comparable to that of a modern nuclear icebreaker.

The carrier can sail unassisted along the Northern Sea Route westward from Yamal all year-round, and eastward for six months of the year (from July to December) to the ports of Asian-Pacific Region (APAC) countries. Previously, the summer navigation window in the eastern area of the Northern Sea Route was limited to only four months with icebreaker support.

The design of Christophe de Margerie has been duly appreciated by oil and gas industry experts: on 7 December 2017, the vessel won the award for Engineering Project of the Year at the 2017 S&P Global Platts Global Energy Awards.

Sovcomflot Group (SCF Group) is one of the world’s leading shipping companies, specialising in the transportation of crude oil, petroleum products, and liquefied gas, as well as the servicing of offshore oil and gas exploration and production. The company’s own and chartered fleet includes 147 vessels with a total deadweight of 12.7 million tonnes. 79 vessels have an ice class.