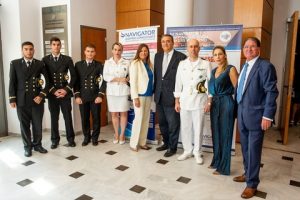 The 18th NAVIGATOR FORUM was held this year on the Island of Chios in Greece’s eastern Aegean Sea between the 21st and 23rd of September with the unique warmth and hospitality of the Chians; on all counts it was a great and successful event! This is the first time that NAVIGATOR SHIPPING CONSULTANTS organized such a weekend for the Shipping Decision Makers with a wide range of activities in more than a friendly atmosphere and unique moments of networking. More than 300 attendees including high-ranking stakeholders from the entire shipping spectrum – shipping executives, representatives from maritime organizations, classification societies, P and I Clubs, journalists, the diplomatic corps, academics and students from Academic Institutions as well as from the Merchant Marine Academies of Oinousses and Chios and many others gathered in this mythical maritime Greek island whose tradition for ship-owners and seafarers is second to none!

One of the greatest achievement of this year’s NAVIGATOR FORUM was the open dialogue held in a full amphitheater at the University of Aegean by representatives of the entire shipping spectrum including Captain (HCG) Irene Argyri, the Harbour Master of Chios, Commander (HCG) Panteleimon Vatoussis, the director of the Oinousses Merchant Marine Academy for deck officers, Maria Makka, Director of Studies of  the Merchant Marine Academy of Chios for Marine Engineers, as well as Greek seafarers, where the problems faced by the sector were analyzed possible solutions were suggested. 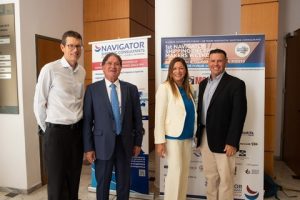 Danae Bezantakou, the CEO of NAVIGATOR welcomed the participants underlining that in order to maintain the leading position worldwide for Greece’s shipping, we should combine ORGANIZATION-METHODOLOGY-WORK- FUNDING-KNOWLEDGE … but also the awakening of the next generation!

NAVIGATOR’s President Capt. Dimitris Bezantakos during his opening remarks stressed the value of SYNERGY and “HANDS ON” which are the keys to success in achieving goals. 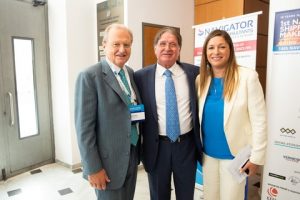 The Minister of Shipping and Insular Policy, Fotis Kouvelis, indicated in a message transmitted to the organizers that his priorities are the development of maritime education and the protection of labor rights. In cooperation with the Greek ship-owners, he has begun an effort to upgrade Maritime Education, with the modernization of the facilities of the Merchant Marine Academies, their curriculum and their connection with higher academic institutions both in Greece and abroad. In this way not only well trained seafarers, but also experienced shipping executives, our tomorrow’s colleagues are guaranteed. 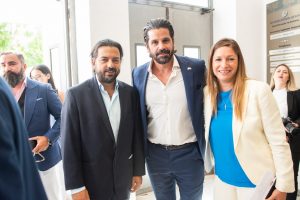 Dr. George Pateras, Managing Director of AEGEUS SHIPPING S.A. and President of Hellenic Chamber of Shipping delivered a well construed and meticulous speech titled: “To scrub or not to scrub?”.  He underlined that the issue of scrubbers installation is a commercial decision and not an environmental solution. He also mentioned that the Greek ship-owners should be more proactive in the environmental decisions to be taken in order to continue being at the top.

“The future of shipping: the role of technology, environmental developments and changes in human resources” was the first panel’s theme successfully moderated by Elena Athousaki, Head of Maritime Sustainable Center at PwC.  She referred to the agenda proposed for the future by IMO – Agenda 2030, which sets 17 goals and more than 160 targets for the environment, people, technology, innovation and ultimately for World Peace defined as a broad framework. 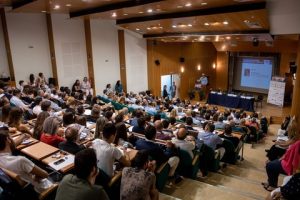 Among the issues raised, the importance of the supply chain was highlighted as well as the growth potential same offers by transforming the strategic location of Greece’s ports – in this instance, into hubs through which products from the East can be transported to the West. 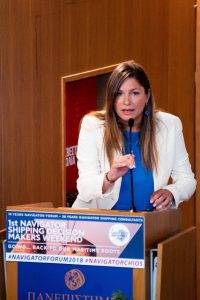 Kostis Achladitis explained that the supply chain is now the third pillar of the Greek economy following shipping and tourism and that there is still room for technological improvements in this field.

Roberto Koustas analyzed the blockchain technology that combines countless data with extremely high speed in order to collect useful results that can be used by human resources. 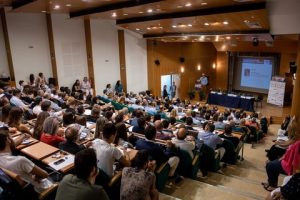 A view of the amphitheatre with Dr. Seraphim Kapros at the podium 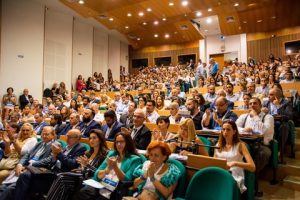 George Xiradakis pointed out the need to return back to traditional maritime roots, as the generation of 50 years old is the last generation who has oceangoing experience on Greek vessels, whilst Angie Hartmann stressed that for the better communication between office and vessel, executives should definitely spend a short time at sea so that they understand the seafarers’ needs.

“In life you must have ethos, be religiously faithful, humble and polite in order to be part of the shipping industry. Creativity and new ideas stem from poverty rather than wealth. Wealthy means “full substance”. Technology cannot be improved without the contribution of the human soul,” said George Tsavliris. 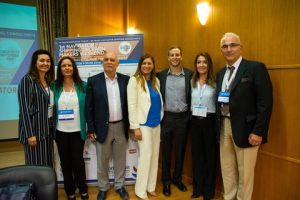 Professor Dinos Arkoumanis, underlined that education is 50% knowledge and 50% personality. He also said that the current “environment” is quite attractive for the young people, whilst our biggest obligation is to support and further help to maintain this trend. He also explained the importance and contribution of private education alongside the public in acquiring maritime knowledge. Theofilos Xenakoudis spoke regarding the market’s positive response to regulations. However, he advised to pay attention to the decisions taken by IMO as they may be affected by strong interests because at the end of the day, ship-owners are requested to pay.  Capt. George Tsouris stressed how important the executives are to develop a professional culture in regards to the proper management of information. George Alexandratos talked about the necessity of Greek conferences as well as having Greek seafarers onboard ships, but above all the must for the introduction of shipping as a lesson in the schools curriculum, which is also the fundamental value of the YES Forum. 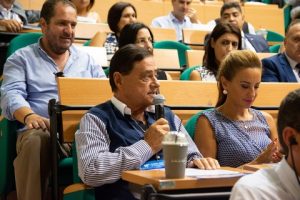 The third panel under the title “ The new challenges in Shipping and the role of education” was moderated by Dr. Seraphim Kapros, Professor at the University of the Aegean, with the participation of powerful group of speakers:  Maria Lekakou Professor at the University of  the Aegean and Dean of its Business School, Maria Kakka Director of Studies at Chios’ Merchant Marine Academy of Engineers, Capt. George Tsouris,  Michael Frangias, Designated Management Representative and Safety Manager at Sun Enterprises Ltd, Costas Kalargyros, Group HR Director at Latsco Shipping Ltd and George Georgoulis, Laboratory and Teaching Staff at University of the Aegean. 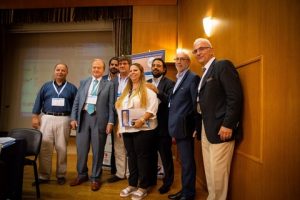 Professor Seraphim Kapros, emphasized that the basic pillar of the University of the Aegean is the high quality knowledge and the process of acquiring practical training. The Dean also noted:  “We are applying technology-based models of entrepreneurship and we use the island as a knowledge lab”. Maria Makka pointed out that young people are finally turning to shipping and that already 100 students of Merchant Marine Academies have already participated in educational trips. In this way they are entering and familiarize in a working environment upon being 18 years old; and lifelong learning is now a part of the seafarers lives. 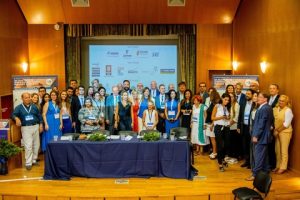 The closing of Navigator’s Forum; all on centre stage!

“I was fortunate to manage young people, investing in human resources, in a company where the majority were Greek seafarers. Today we are proud of the cadets, who are qualified, financially independent and devoted to the sea and good command of the English language. After more than 50 years of experience I can safely say that the water running in the “shipping taps” is remarkable, “said Michael Frangias. “You need to get to know the person you choose. You cannot exercise human resources management unless you understand the culture of the company. I would like companies to be in touch with universities. The values ​​of shipping must be passed on to students, “said Kostas Kalargyros. 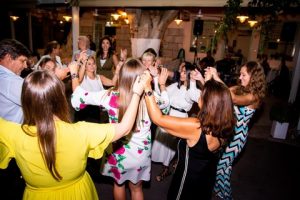 From the Chian Feast at Langada; dancing in jovial mood..

Danae Bezantakou concluded in pointing out that some steps should be taken to institutionalize “voluntary work” so that young people gain knowledge and experience. Professor Seraphim Kapros, proposed that at least two workshops per year, attended by both students and shipping executives, should be organized. The President of the Hellenic Chamber of Shipping, Dr. George Pateras, welcomed the initiative and proposed to be the moderator in a panel where only students participate. 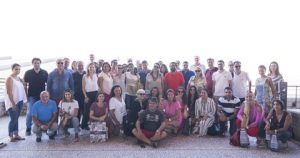 Delegates, speakers, sponsors and organisers at the Mastic Museum

Beyond the Forum and the debates, the 2018 “NAVIGATOR – The Shipping Decision Makers Weekend”  extended an invitation to all of the Forum’s participants for a traditional evening, a Chian Feast, at the seaport of Langada, an excursion to the Mastic Villages with a tour at the Mastic Museum, as well as a visit at the unique Chios Maritime Museum.

Such an innovative event wouldn’t have been possible without the support of the sponsors, the Greek shipping community participants, supporters and the cooperation of KEFI S.A. who helped this Forum to take place for the first time on the Island of Chios. 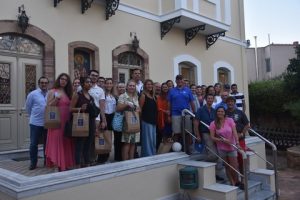 …and at the Maritime Museum of Chios

We are already looking forward to welcoming you in the 19th NAVIGATOR 2019 – The Shipping Decision Makers Forum, which will take place in Athens during November 2019.