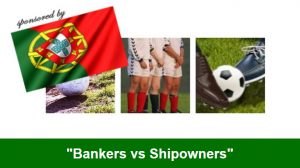 Football was the winner in a hard-fought game as Hamburg’s shipowners finally overcame the city’s bankers with two late goals in front of 200 raucous fans at the Adolf-Jäger-Kampfbahn stadium in Hamburg-Altona.

This year’s version of the long-running fixture was certainly not one-way traffic as the bankers put the shipowners, led by Seaborn’s Holger Strack, under early pressure down the right flank. Both sides then enjoyed a number of chances before the owners settled into their stride and started to dominate play.

But despite all their effort the goals would not come. Patrick Barao Martins of MACS went close with a sensational strike against the bar and Alexander Stoldt of Orion Bulkers left his marker trailing after the owners put together a superb technical move.

But Stoldt was unable to get the ball into the box and an exciting first half ended as referee Marc Richter of HSH blew his whistle, leaving the owners rueing their lack of a clinical finisher in front of goal in the absence of injured goal-getter Stefan Winkel of TB Marine, who defeated the bankers almost single-handedly in the corresponding fixture in 2017.

With the second half underway, goalkeepers Heiner Thormalen of NSB and man-of-the-match Michael de Visser of NIBC increasingly warmed to their task and it quickly became clear that the deadlock would only be broken by an act of individual brilliance.

And it proved so in the 81st minute when Barao Martins blasted home a left foot shot just centimetres from de Visser’s despairing dive. But not content with one goal, the MACS striker was again on target a minute from time when he skilfully disposed a defender and rifled in a half-chance from 11 metres.

Amid the fun and festivities fans and supporters took the opportunity to raise a remarkable Euros1,400 for the Duckdalben seamans’ mission. Anke Wibel, head of the mission, was on hand to personally thank all donors for their generosity in supporting seafarer welfare.

Altona 93’s C-Youth squad were delighted to be rewarded for their vociferous support during the match with free tickets to an upcoming FC St Pauli match and Marco Luterbach of redRobin was the lucky recipient of the Gin Sul bottle and tonic water, donated by the Portuguese Register from the Altonaer Spirituosen-Manufaktur.
We hope to see you all next year – as always on the 1st Wednesday in September – to watch the revanche of the bankers.

ROTTERDAM 2018: Everything you need to know about the COA Members Meeting and the COA Container Pavilion