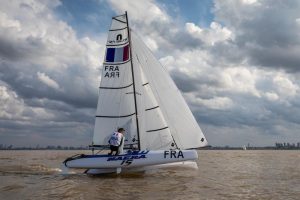 A frustrating day epitomised by light winds meant that Girl’s and Boy’s Windsurfing (Techno 293+) could also only sail one race each, while Girl’s and Boy’s Kiteboarding (IKA Twin Tip) were able to sail two heats each.

Racing began on time for all three events and initial wind conditions looked promising, but Kiteboarding was subsequently postponed, and the Nacra 15s’ second race was abandoned.

After initially returning to shore, the Techno 293+ and the Nacra 15s returned to the water for a second attempt, before Race 4 of the Boy’s Techno 293_ was abandoned. Racing was then called off for the day at approximately 16:30.

In the first ever Nacra 15 race at the Youth Olympic Games, the French team of Petard and Coutard managed the shifty conditions well to claim the first victory.

“We will take it match by match, but we are really happy to represent France at this incredible event.”

Euro will not survive if Italy fails, Assessing a decade of QE