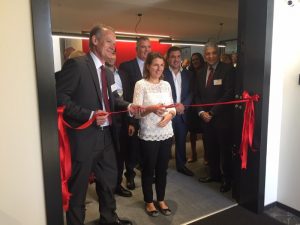 October 10, 2018 – North P&I Club celebrated the opening of its new office in Piraeus, Greece, yesterday with an open-house reception for around 350 representatives from the Greek shipping community.

The reception, which took place at North’s new office on Filonos Street, was attended by North’s Greek shipowner members, brokers and lawyers. The event was hosted by North’s Chief Executive, Paul Jennings, and the 15-strong Piraeus-based team. Jennings, along with Ioanna Procopiou/Sea Traders jointly cut the ribbon to officially declare the office open. The opening ceremony was also attended by board members George Moundreas/NGM Energy SA and Dimitris Marinos/Seastar Chartering and Stefanos Kollakis/Chartworld.

Centrally located in Piraeus, the new office has capacity for further growth and reflects the Club’s commitment to the region. North’s Chief Executive Officer, Paul Jennings, commented “I am delighted to be here to celebrate the opening of our new office here in Piraeus. These new facilities will enable the team to maintain, develop and improve the service provided to members in this very important region for the Club.”

In August 2018, the Club announced that it was adding strength and depth to its Greece team in Newcastle and locally in Piraeus, with a number of new appointments and promotions, representing a major investment in resources available to the local membership. In addition to the popular annual Yacht Club Seminar, North’s Greek team deliver a number of Member seminars and events throughout the year.

Director, Tony Allen, commented “We continue to enhance and refine our range of support to meet the requirements of our members in an ever-changing shipping and regulatory landscape. Our seminars and initiatives are specifically aimed at encouraging our members to prepare early for the likely operational impact of these changes.”

Tony Allen, continued, “On behalf of the team, would like to take this opportunity to thank our membership for their continued support and we look forward to developing our relationship further with them.”