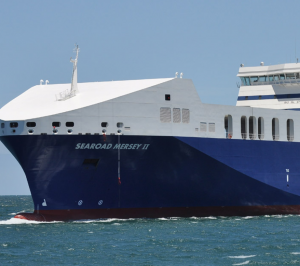 The IMO decision to limit the sulphur content of ship fuel from 1 January 2020 to 0.5 per cent worldwide, and the recently adopted resolution to reduce greenhouse gas (GHG) emissions by 50 per cent by 2050, will change the future mix of ship fuels dramatically. As shown in Figure 1, the combined amount of heavy fuel oil (HFO) and marine gas oil (MGO) consumed by ships accounts for no more than 25 per cent of total global diesel fuel and petrol production (2016 figures). This is roughly equivalent to the amount of energy consumed using liquefied natural gas (LNG), which stands at 24 per cent; however, LNG represents only a small portion (approximately 10 per cent) of the overall gas market.

Assuming an installed base of about 4,000 scrubbers in 2020, no more than 11 per cent of ship fuel usage will be high-sulphur fuel, DNV GL calculates. Latest estimates assume that no more than 2,000 scrubber installations will be carried out between now and 2020. This raises the question whether high-sulphur fuel will even be available outside the largest bunkering ports if only 4,000 or even fewer ships will be able to use it. The next question is what the price differential between HFO and compliant fuels will be.

Fuel cell systems for ships are under development but will take time to reach a level of maturity sufficient for substituting main engines. Battery systems are finding their way into shipping; however, on most seagoing ships their role is limited to enhancing efficiency and flexibility. Wind-assisted propulsion, while not a new technology, will require some development work to make a meaningful difference for modern vessels. 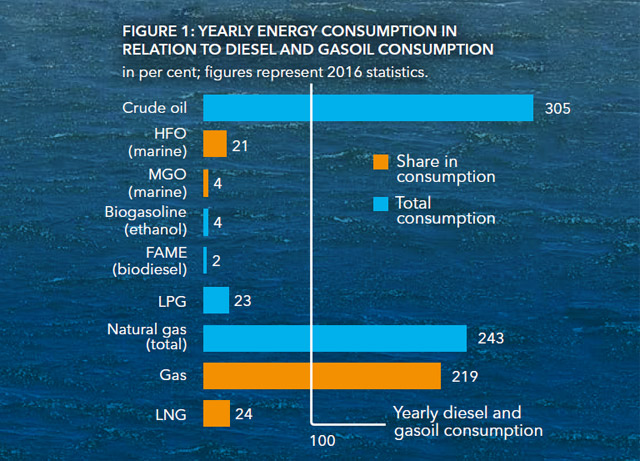 When it comes to CO2 emissions, LNG is the fossil fuel producing the lowest amounts. However, the release of unburned methane (socalled methane slip) could reduce the benefit over HFO and MGO in certain engine types. Methane (CH4) has 25 to 30 times the greenhouse gas effect of CO2. Nevertheless, engine manufacturers claim that the tank-to-propeller (TTP) CO2-equivalent emissions of Otto-cycle dual-fuel (DF) and pure gas engines are lower than those of oil-fuelled engines.

If produced from renewable energy or biomass the carbon footprints of methanol and hydrogen can be significantly lower than those of HFO and MGO.

The greenhouse gas challenge
The cleanest fuel is hydrogen produced using renewable energy. Liquefied hydrogen could be used in future shipping applications. However, because of its very low energy density it requires large storage volumes, which may prevent hydrogen from being used directly in international deep-sea shipping. In a sustainable energy world where the entire energy demand is covered by renewable, CO2-free sources, hydrogen and CO2 will be the basic ingredients for fuel production, most likely in the form of methane or diesel-like fuels produced in a Sabatier/Fischer-Tropsch process. The Sabatier process is a reaction between hydrogen and carbon dioxide at elevated temperatures – optimally 300 to 400°C – and pressures in the presence of a nickel catalyst to produce methane and water. An alternative, the Fischer-Tropsch process converts a mixture of carbon monoxide and hydrogen into liquid hydrocarbons in a series of chemical reactions.

Looking ahead, LNG has already overcome the hurdles of international legislation, and methanol and biofuels will follow suit very soon. It will be a while before LPG and hydrogen are covered by appropriate new regulations within the IMO IGF Code as well. The existing and upcoming environmental restrictions can be met by all alternative fuels using existing technology. However, the IMO target of reducing GHG emissions by 50 per cent by 2050 is ambitious and will likely require widespread uptake of zero-carbon fuels and further energy efficiency enhancements. Fuel cells can use all available alternative fuels and achieve efficiencies comparable to, or better than, those of current propulsion systems.

However, fuel cell technology for ships is still in its infancy. Promising and advanced projects are, e.g., those running under the umbrella of the e4ships lighthouse project in Germany, with Meyer Werft and ThyssenKrupp Marine Systems heading the projects for seagoing ships.

Wind-assisted propulsion could potentially reduce fuel consumption, especially when used for slow ships, but the business case remains difficult. Batteries as a means of storing energy can be considered as an alternative fuel source in the widest sense. Especially on ships operating on short, regular voyages, they have major potential as a means to boost the efficiency of the propulsion system. In deep-sea shipping, batteries alone are not an adequate substitute for combustible energy sources. Finally, with low-sulphur and alternative fuels becoming more widely available, the well-known combined-cycle gas and steam turbine technology as used in the PERFECt Ship project represents a viable alternative for high-power ship propulsion systems.

Capt. Antonio M. Padrón at the celebration events of the 170 years of the FRED OLSEN shipping company in Cádiz