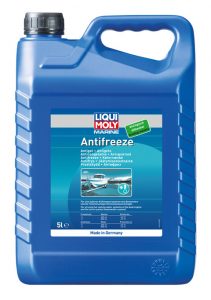 October 2018 – Boats are mostly stored in the dry over winter. For skippers this means either going to a lot of effort to empty all the water pipes or using a frost protection agent. LIQUI MOLY is introducing Marine Antifreeze to the market.“It offers outstanding protection against corrosion and oxidation and is biodegradable,” says David Kaiser, Head of Research and Development at the specialist for vehicle chemicals.

Safe winter storage of boats requires time and precision. If they are not stored in the water, but on land, freezing water residue in the cooling system can cause the pipes to burst. A frost protection agent such as the new Marine Antifreeze by LIQUI MOLY prevents this. “It also protects against corrosion and oxidation, which occurs as soon as the damp components come into contact with the air,” says David Kaiser.

During the season, when the boats are in the water, the cooling circuit is under water, shielded from the air, and is therefore not vulnerable to corrosion and oxidation. An intact cooling system ensures a stable operating temperature of the engine and protects it against overheating.

Glycol-based frost protection agents are generally considered to be bad for the environment. But there is glycol, and there is glycol. “LIQUI MOLY uses monopropylene glycol, which is biodegradable,” explains the head of research. “However, what’s important in these antifreeze liquids is not the glycol, but the corrosion protection used. We have developed our product in such a way that it ensures the protection of the engine just as much as the protection of the environment, because it is more than 99 percent biodegradable.”

Marine Antifreeze is intended for all external cooling water systems of boat engines and toilet facilities. Because it is a concentrate it can be diluted before use. Depending on the mix ratio, it can protect against frost at up to negative 22 degrees. The product is available in 5-liter and 20-liter canisters and in 20-liter and 205-liter barrels.