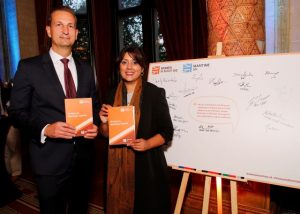 From left: Henrik Pedersen with Nusrat Ghani, the UK’s Parliamentary Under-Secretary of State for Transport, at the launch event

The company has signed up to the Women in Maritime Charter, a Maritime UK-led venture which will see nautical-related businesses supported to improve their gender diversity.

The initiative was formally launched at an ABP-sponsored event in London during Maritime UK’s Maritime UK Week.

These principles were highlighted in an ABP video played at the event which showcased the vast amount of careers on offer to women in the maritime industry.

Mr Pedersen noted that last year, his business managed to employ 8% more women than it did in 2016.

“We are creating tailored programmes to promote gender equality in the workplace,” the chief executive said during his speech.

“We are building inclusive environments where everyone can be fulfilled and achieve their ambitions.”

The Women in Maritime Charter, put together by Maritime UK’s Women in Maritime Taskforce, has three key components: businesses deciding that they want to excel, businesses taking stock of their position and businesses creating individual action plans with core objectives and several extra goals or commitments relevant to the firm and its context.

Reaffirmation of the Women in Maritime pledge, taken by companies to display their intent to make change — “We are committed to building an employment culture that actively supports and celebrates gender diversity, at all levels, throughout our organisation, and our industry” — is also contained in the action plans.

Those participating in the charter include DP World, Lloyd’s Register and The Baltic Exchange.

More information about the charter can be found here.