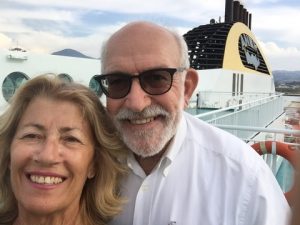 We have just been reminded that even in this sometimes soul-less age, one can experience at sea what seem like magical voyages, if the stars – the combination of quality ship, owner, management and crew – are gloriously aligned.

We take pride in covering more than 150 categories in this medium, one being coastal services within the same country or between neighbouring countries divided by the sea. Technical improvements and new technology as well as new designs of ships for the needs of the travelling public and transport in its entirety have rendered great changes, for instance from the simple passenger vessels we have moved to the era of the RoRo ferry passenger cargo vessel. For generations ferry services have held a special place in the hearts of their passengers, locals and visitors alike. The Greek archipelago, the Adriatic and the Mediterranean are the subject of our special reporting. Our teams all over Planet Ocean as you have seen from previous coverage, in ALLABOUTSHIPPING.CO.UK use ferry boats, RORO passenger ferries, catamarans, mono-hulls and others of the kind. Completing two years of criss-crossing the European mainland from London to Athens where we have traversed straits, inland waterways and canals, lakes, ports and terminals as well as marinas, the use of ferry transport is so often the ultimate part of our journey for many reasons. 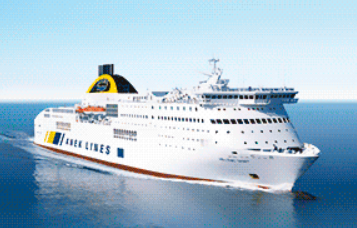 We always look forward to the moment of boarding and disembarking for a multitude of reasons; first to relax and unwind, have a satisfying meal and enjoy our drinks, the crossing adventure confronting the winds and the bracing sea-breeze. We have sailed with many companies and it was about time to sail with ANEK!

Our northbound trip to London began on a very special and significant day with many contrasting feelings being the 11th of September – 17 years after the despicable atrocities in New York which completely changed the status quo on Planet Ocean; and on the other hand a family day given my twin nephew and niece’s birthday. We boarded at Patras, Greece’s main western gateway to central west Med, the Ionian Sea and the Adriatic. In the area from Patras up to the lagoon of Venice many shipping entities have competed for decades. Millions of passengers, cars and trucks move through, making it one of the most important shipping lanes and routes… 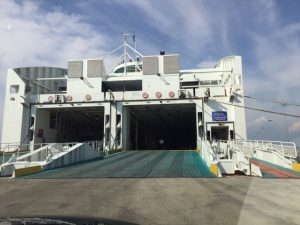 Awaiting us was the “Hellenic Spirit”, the most modern ferry in ANEK Lines’ fleet, stern berthed at the end of the international port’s pier. She is a Greek Flag 2001 Norwegian-built 1,850 passenger RORO ferry and she can carry cars, container trailers and long cargo vehicles, in five levels of garages with an appropriate layout for the needs of safety of this type of transport. ANEK has exemplified the triumph of Greek shipping’s innovation for just over 50 years. As a young college boy I remember when going or returning from my AKKS Spetses College, the “Kydon” in the Port of Piraeus nearly 48 years ago berthed nearby, the most innovative conversion of its time proving the ingenuity of the Cretan and Greek shipping business mind; that was and continues to be The Milestone of Greek Ship Conversions! 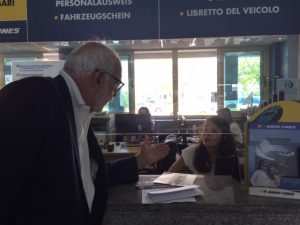 Our immediate experience of ANEK’s professionalism was during the collection of our tickets from the company’s offices in the international port terminal where we were greeted by the eloquent and fine- mannered Ronza Raouasnte! We then drove to the pre-boarding vehicles point and after a few minutes we continued up the stern ramp where the designated crew were waiting, checked us thoroughly and we ended down at the minus-5 deck garage. There we were met by the vessel’s specialist parking personnel assisting us in parking our car. We noticed that with very simple signals and patience – given that they must in the course of their work encounter some extremely odd cases, the parking crew members demonstrated their highly-trained capabilities.

We took our luggage for the night and went to the reception to collect our cabin keys. A smiling cabin-crew mess-man carried our luggage and showed us our cabin.

It was much more than simply… “a cabin with a view”… At the fore of the ship overlooking the forecastle it was beyond our expectations. All Shipshape and Bristol fashion as we say in shipping. Easy access to the wi-fi, a much-needed tool these days, particularly for the men and women of the media.

A quick shower followed to revitalise us in the well dimensioned shower room of the cabin before going for soft drinks, again at the fore part of the ship at its main bar overlooking the forecastle with George a waiter with 17 years of service with the company, serving us with a great smile and excellent manners as if you were on one of the early 1900s ocean cruise-liners! 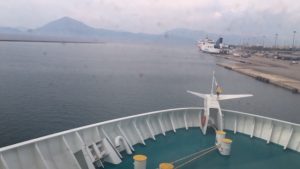 From the cabin with the view…

It was about 4 o’clock when we heard the announcement of the vessel’s departure and got on the starboard upper deck to watch the ship sail. Spot on, on time – just 4 minutes extra for a last car delayed due to Patras’s city chock-a-block traffic.

The sea passage to Ancona began with the most splendid and favourable sea conditions; an amazing sea breeze; one, maximum two of the Beaufort scale complementing the heat-wave we experienced the last few days in Greece. And what a sunset that was, sailing by the western coast of Aetoloakarnania (central Greece) heading towards the port of Igoumenitsa in northwestern Greece – the country’s second gateway to the west and Adriatic.

There were also at least one hundred passengers enjoying these breathtaking views; a …complimentary cruise so to speak in the magnificent Ionian Sea… Magnificent is indeed the word! Rarely can you see such a sky at night and we were very fortunate in espying the romance of the stars… 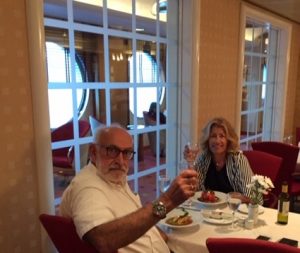 At the Symposium Restaurant; cheers to ANEK!

It was about seven when we decided to dine at the Symposium restaurant. An excellent cuisine with fresh cream Cretan smoked pork “apaki” baked with homemade tomato sauce and Cretan traditional pasta with minced meat and aromatic nutmeg; smoked salmon with yogurt mousse and aromatic herbs and king prawns with apple geranium aroma, light spicy green pea puree and tomato sauce… And what fruity wine that was to open our minds: Sauvignon blanc at its best = The Northern Sun… 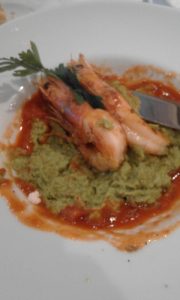 …detail of the special prawns plate…

It was just about a full house with the maitre and waiters performing as if it were a Hollywood extravaganza.

It is a must for our international readership, particularly those ashore, to understand the importance of good food and good service on board, whether the vessel is a cargo ship or a RORO passenger ferry or cruise ship as the passengers and crew have no other choice but those offered by these vessels, with quality, facilities and service. ANEK was more than matching such expectations!

We “strolled” around the entire two main decks, where everything was in order, people watching television, others having drinks at the bars, others in a jovial mood, following the drinks, others taking part in games… There were facilities and amenities for passengers of all ages and of all cabin classes, with aircraft style numbered seats…

Time for a reasionably early night which we combined with a glimpse of watching the call at Igoumenitsa.
It was midnight and it was plain sailing at the North Ionian Sea, just off Corfu having the three outer Greek territorial islands, Mathraki, Erikousa and Othoni – the Diapondia Islands – on our portside before entering the Adriatic and wondering where was Aeolus as we have never experienced such calm sea conditions. Poseidon’s gift at its best… 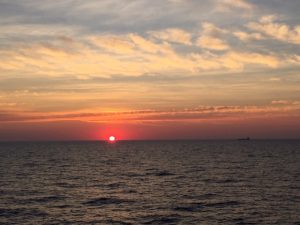 We woke up just before daybreak to ensure we would not miss the sunrise given the exceptionally clear sky and it was Beatles live all the way in full dimension: “Here comes the sun, the Sun King”. We took amazing shots and asked fellow passengers to take some of us too…

All in all we were ten passengers enjoying one of the best sunrises of our lives, on board and ashore as we say in shipping! 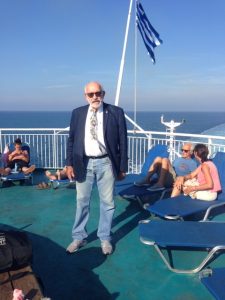 What …a cruise that was…

Back to our cabin to catch up with the latest world news before having our morning coffee and going for breakfast in the vessel’s self-service restaurant. All shipshape, all fine and tidy with fellow passengers enjoying their breakfast…

Given the wonderful weather conditions we strolled around on the decks making new friends. A visit to the vessel’s shopping mall for gifts and souvenirs offered by a welcoming lady manager and lots of Cretan products always useful for us living abroad as well as to take as gifts. 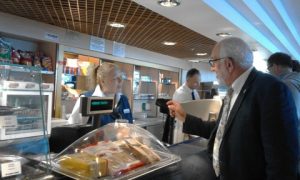 The shipping world might be very big, Greek shipping too; it can also be “very small”, as more or less we all belong to the big Greek shipping family with all our friends around. There isn’t a family in Greece that doesn’t have at least one of its members connected with the sea – on board or ashore. At the coffee bar where we purchased yesterday our Internet wifi card I spotted the name on the badge of the bar manager: Labrini Zeibeki. I asked her whether she knew Rt. Adm. Sotiris Zeibekis from the Hellenic Coast Guard. She responded that he is her uncle with whom we became friends during his tenure as the Greek Coast Guard officer Harbourmaster in London and representative at the IMO !!!. Making her acquaintance was a great moment for all of us. We were pleased to hear how happy she was with her job and the company in her 17 years of sea service. We hope that one day she will be in full command in her sector. 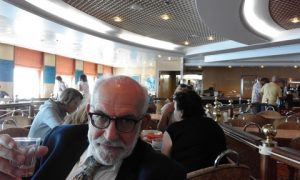 Lunch time at the self- service restaurant bar

Lunch time at the self-service restaurant enjoying good food – classic ship’s omelet and sausages well prepared and presented at a good price. Additionally we enjoyed just a glass of Greek wine, as afterwards upon arrival to Ancona we had to drive to Annecy in France, a seven hour journey…….

At the final stage of this sea passage we decided to meet and thank the master of the “Hellenic Spirit”, Captain Apostolos Apostolakis, but hard luck! We had left it too late and despite explaining to the chief receptionist it was just to thank and congratulate him for a very well kept vessel with exceptional seafarers and service, we were told and rightly so that due to the ISPS code as the vessel was approaching the port – in this instance Ancona — no unauthorised persons are allowed on the bridge. 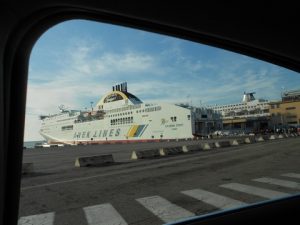 The “Hellenic Spirit” berthed in Ancona after our exceptional encounter

We prepared ourselves to leave our cabin and get ready for disembarkation as well as to drive off our car. All was done in order and we witnessed a minor complaint by a family with an epileptic child in her teens and thank God, the chief receptionist’s patience and fluent Italian stopped short a misunderstanding. Once again we saw evidence of a well- trained crew; just one of the assets of the great ANEK fleet!*

In keeping with the demands and expectations of the times, the ship was governed, we were pleased to observe,  by the company’s keen attention to environmental policies!

And here we go live:

Kastelorizo: The ‘invisible’ heroes of a forgotten island

Changing our way of work at CIRM