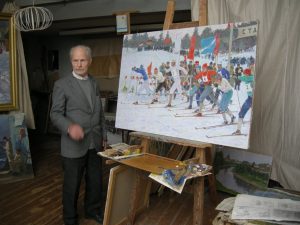 Like the restless waves of the Baltic, Russian painters are constantly experimenting with ways of using the resources of their palette to illustrate the foaming sea. Their dynamic approach contrasts with the less imaginative approach of many other artists.

Konstantin Molteninov is one such master of technique who has conquered the challenge of conveying the verve of the element that covers three quarters of the planet. 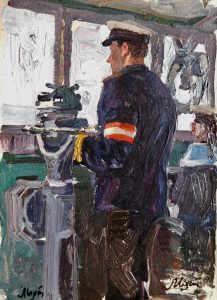 He is a survivor: he maintained his integrity by his lights of patriotism and the school of socialist realism throughout the shifts and shocks of the Soviet Union, when he was in and out of favour, after which he weathered the turbulent years of the crash of the political bloc. Born in 1924, he appears still to enjoy good health, having formally retired only in 2015.

Dr John Barkes, a UK art dealer who has known him for 26 years, has written in his illustrated catalogue of important output of the painter: “Molteninov is a quiet, austere, determined man whose career was devoted to the Artists Union, working within the system, striving to visualise and promote the great revolutionary quest to build and establish a peoples’ communist state for the benefit of all.” 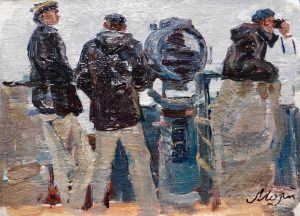 Dr Barkes is a great promoter of that “quiet man” and has most recently been exhibiting in London (at the autumn 2018 Decorative Fair at Battersea and elsewhere) canvases of Molteninov for sale. In all, he made available 55 paintings and sketches, completed between 1953 and 1972, which collectors have been snapping up (sales over the past few years have given Konstantin Georgevich and his wife the resources to build a new dacha).

At the same time, there has been an exhibition of 95 Molteninov works at the St Petersburg Artists’ Gallery, due to continue until November 20. 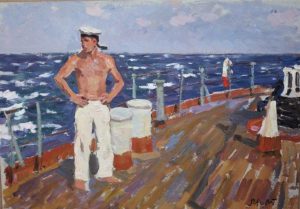 On the battle cruiser Admiral Ushakov. Oil on board, 1963.

The dealer admires many facets of his work including naval and marine studies.

In one productive episode, Molteninov took his equipment on a voyage with the battle cruiser Admiral Ushakov from the Baltic to the Black Sea in 1963 and painted from the deck many views of naval life. One, oil on board, shows the type of bare-chested sailor that some television viewers might swoon over these days, but just as important artistically speaking is the flair shown in the texture of the wooden deck and, beyond, the serene, crested breakers. Molteninov’s enjoyment of the experience and keen observation are reflected in such as On Watch, On the Bridge, and Swabbing the Decks. A canvas entitled Evening at Sea shows the sunset gleaming on gentle waves, underlining the authority that this and other Russian artists command in their depiction of sea scenes. 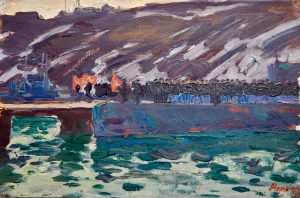 On arrival with the cruiser in Sevastopol, he and others in the team received a badge inscribed For a Long Campaign from the Supreme Commander of the USSR Navy.

Molteninov has sustained his positive outlook across several genres. Psychologically speaking he is never north-facing even when he portrays winter sports: there is an insouciance about the skiers populating a snow storm scene, and an excitement expressed through the hurried brushstrokes depicting a race at Kavgolovo, a ski resort on the Karelian isthmus 20 km north of St Petersburg.  As a keen cross-country skier, he knew all about the thrills and spills. His favourite photo of himself (reproduced in this article) was taken in his studio in 2008 with his 1953 large (95 by 135 cm) oil painting The Start of the Ski Relay Race. 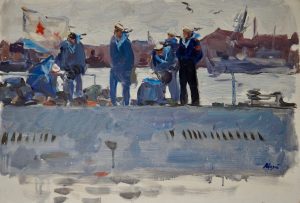 Named in 1995 as an Honoured Artist of the Russian Federation, Molteninov is the last surviving pupil of Rudolf Frentz (1888-1956), who was much lauded for his skills in painting battle scenes. Dr Barkes says that Frentz was a notable member of the brilliant post-Revolution Russian avant garde and one of the few from that group to continue to work effectively under the constraints imposed by Stalin in 1932. Rudolf Frentz was able to adapt his brilliant colour sense and bold design concepts to excel as a painter and as an inspirational teacher of the Socialist Realist ideal, adds the British expert. 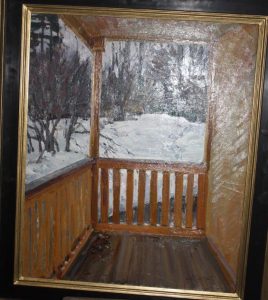 Molteninov was one of five sons born to hard-working parents who had a smallholding in the Volga Basin. His eldest brother, Grigory, was a head teacher, and another brother Nikolai, graduated from a flight school.  He says that his parents fell on hard times as the foundations of the old order gave way to collectivisation, and the family moved from the countryside to Leningrad, where his father got work at a meat factory.

At school, Konstantin distinguished himself in drawing and went on to art school and what he calls “the creative dacha.” The morning after he arrived there in June 1941, he took his easel and with friends went to the river to sketch only to hear the cry of “War!” go up. In September, German bombing marked the start of the siege of Leningrad, and hunger made his stomach swell. 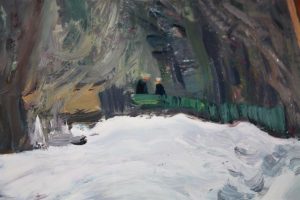 Snow at the dacha (detail).

His brother Nikolai fought on the Leningrad front, with his pilot shooting down two Messerschmitts of six that were attacking his plane. Both Konstantin’s elder brothers were killed during the war, and his father by a shell at Yaroslavl, to where the family had evacuated.

Konstantin worked 12 hours a day at a locomotive repair plant that made shells for Katyusha rocket launchers. Then he studied at naval school, after which he was sent to the Arctic Fleet near Murmansk, where he took part in combat missions and was awarded the Order of the Great Patriotic War and other medals. In September 1946 he returned to Leningrad and the renowned Repin Art Academy. His battle sketch won praise from Rudolf Frentz with whom he studied from 1947 to 1953. 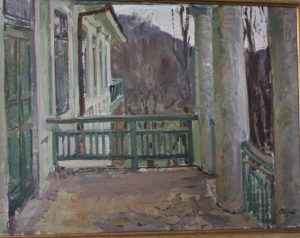 The balcony at the workers’ sanatorium. Oil on board. 1960s.

His diploma work on graduation from the Repin institute was Start of the ski relay race, paving the way for many of his heroic tributes to winter sports and team rowing on a lake north of St Petersburg.

A studio was organised for artists in 1963 at Leningrad Naval Museum for commissioned paintings on the naval theme. In that year together with another painter, a writer and a composer he was invited by the Naval Staff to join a long voyage on the Admiral Ushakov. This took them via the coast of the UK, the Bay of Biscay, the Bosporus and Greece, ending in Sevastopol.

In the 1960s he turned to the everyday life of workers and agricultural subjects such as potato planting and the harvest, and in the 1980s he was involved in the 40 m by 8 m diorama Breakthrough in the Siege of Leningrad painted by a 10-strong group headed by his friend VI Seleznev. The group worked for five years to install the diorama on a bridge and had to contend with winter cold and constant noise from heavy traffic. The diorama covers the fierce battles in January 1943 for Leningrad on the right bank of the River Neva. 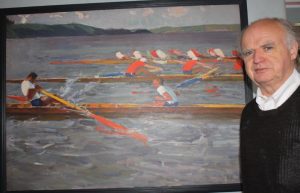 Dr Barkes first met Molteninov in 1994, when “his world had been shattered by the fall of the USSR” and found he was at that time reluctant to part with his works. He painted in his St Petersburg studio until 2015, when he agreed to release many of his canvases. His final two ambitious compositions were a sunlit paddock full of horses and lively activity at the top of a ski slope

Dr Barkes said that most of the material in his catalogue has been assembled in the last three years “from the depths of his studio.”