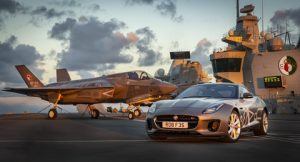 Fast jets might be stealing all the headlines as aircraft carrier HMS Queen Elizabeth conducts trials of the F-35 Lightning II off the east coast of the USA, but British engineering has also been celebrated by sailors, airmen and Royal Marines on-board.

A Jaguar F-TYPE Coupe, wrapped as an F-35B fighter jet, has taken pride of place on the flight deck in a photo debut alongside the 5th generation jets. The car had been kept under wraps in the ship’s vast hangar until its runway appearance during the ‘Westlant 18’ deployment where the F-35Bs have embarked to conduct trials.

Jaguar Land Rover has been affiliated to both HMS Queen Elizabeth and her sister ship HMS Prince of Wales, currently in build in Rosyth, Scotland, for the past five years.

British engineering is celebrated with both machines on display: The F-35 Lightning II fighter is the world’s largest single defence programme and the UK has played a major role from the outset. UK industry will provide approximately 15% by value of every F-35 Lightning II built and the UK will be a major global hub of F-35B maintenance, repair, overhaul and upgrade for avionic and aircraft components.

Commanding Officer of HMS Queen Elizabeth, Capt Jerry Kyd said: “The Jaguar F-TYPE alongside the F-35B symbolises the very best of British design and engineering. Bringing the two together in HMS Queen Elizabeth, itself a triumph of collaboration between UK industry partners and the Ministry of Defence, is representative of the strong ties we as a ship have developed with Jaguar Land Rover. The technology involved in the aircraft carrier, F-TYPE and the F-35B are all linked; a high quality demanding specification, precision engineering, power and performance. All three represent cutting edge technology that underlines the very best of British innovation and design.”

Planes take the strain over fears about soaring...