News from port of Marseille Fos 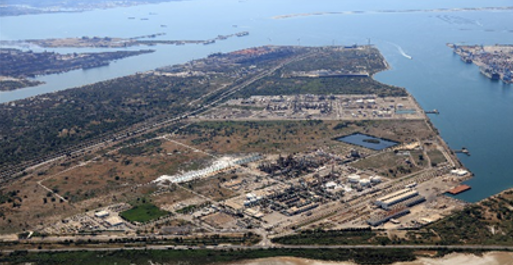 QUECHEN SILICON CHEMICAL, the world’s 3rd-largest manufacturer of silica for green tires, has signed a ground lease to build its new European factory in Fos-sur-Mer in the South of France.

The largest Chinese industrial investment for a new factory in France has taken another major step forward with the signature of a ground lease between Quechen and the Port of Marseille Fos. This move means the site surveys necessary for construction can now be started and the factory is expected to be operational in 2021.

After studying various potential locations for the factory, Quechen opted for a 12-hectare parcel at the heart of the PIICTO site (Platform for Industry and Innovation at Caban Tonkin) at the Port of Marseille Fos.

This 105-million euro investment, which will lead to the creation of 130 direct jobs and eventually generate 400 000 metric tons of freight per year, was facilitated through a coordinated effort by the Provence Promotion economic attractiveness agency, the Port of Marseille Fos, the PIICTO association, the Business France national economic development agency, the French government, the Sud Provence-Alpes-Côte d’Azur Region, the Aix-Marseille-Provence Metropolis, and the Chamber of Commerce and Industry Marseille Provence, with additional support from the Total Group.

This investment is further proof of the attractiveness of the industrial platforms in the Gulf of Fos area, while it also accentuates the efficient collaboration between the different institutions and organizations working to bring investment to the territory.

According to Pierre DARTOUT, the prefect for the Provence-Alpes-Côte d’Azur Region and the prefect for the Bouches-du-Rhône Department, “Beyond the jobs and wealth that it will bring to the territory, the creation of this greenfield factory by Chinese investors represents a significant decision that is consistent with the President of the Republic’s stated objective of balancing the economic relations between the two countries. It also illustrates the numerous industrial advantages of our metro area and is a tribute to the efficient partnership between the port, the local governments, and the French state in working to makes sure these advantages are fully appreciated. The French state will continue to work alongside local governments to support this project, notably through recruitment help and consultations on environmental, fiscal, and customs regulations.”

According to Martine VASSAL, the president of the Aix-Marseille-Provence Metropolis, “The implantation of QUECHEN is concrete proof of the interest being shown by French and foreign companies for the opportunities to be found in our territory’s network of industrial platforms. It was in this dynamic that the metropolis launched its Call for Projects for Provence Industry’Nov initiative last April, an initiative that brings together the Port of Marseille Fos and the Total, PIICTO, and LyondellBasell industrial platforms. Provence Industry’Nov was founded on the joint objective of the industrial and institutional sectors to see a manufacturing renaissance here in a territory has been profoundly shaped by its industrial history. Our metropolitan economic attractiveness agency, Provence Promotion, in collaboration with the Chamber of Commerce and Industry Marseille Provence, led Provence to victory in the race for this investment against close to 30 competing sites across Europe and I personally congratulate their teams… I would like to particularly commend one of the administrators, Didier Parakian, the president of the Economy and Innovation Commission at the Metropolis, who was the first elected official from France to make contact with QUECHEN in December 2015.”

According to Renaud MUSELIER, the president of the Sud Provence-Alpes-Côte d’Azur Region, “Among the 28 potential implantation sites identified in Europe, the QUECHEN company has today chosen to sign with the Port of Marseille Fos to open its factory here in Fos-sur-Mer. It is a strategic choice, and I applaud both the decision and all those who have worked these past months to finalize the negotiations. Christian Estrosi travelled to Wuxi, China two years ago to meet Mister QUE. I also had the pleasure of meeting with Monsieur QUE in my office at the regional headquarters and we were able to discuss all of the region’s advantages. This decision is powerful testimony to the potential of our territory, to its attractiveness, and to the quality of its infrastructure. So, for me, it is truly a great victory for both jobs and economic growth in Provence-Alpes-Côte d’Azur! … The Sud Provence-Alpes-Côte d’Azur Region will work alongside the Aix-Marseille-Provence Metropolis, Provence Promotion, and the French government to provide dedicated support to QUECHEN for its project. The cooperation between the territory’s industrial and institutional actors was what allowed us to convince QUECHEN this was the right decision.

According to Christine CABAU WOEHREL, the CEO of the Port of Marseille Fos, “This signature of the ground lease between QUECHEN and the Port of Marseille Fos is the fruit of more than two years of effort by the port team working in close collaboration with the full array of partners for the Western harbors portion of our territory to persuade this Chinese industrial company that the Fos-sur-Mer site is their best option in Europe. We also applaud the support received from the French national government and the local governments who showed a collective willpower that made this success possible. Today, we are making official a type of project that is rare in France: a greenfield investment of more than 100 million euros. This will lead to the eventual creation of approximately 130 direct industrial jobs as well as more than 400 000 metric tons in annual freight traffic. This is a huge and wonderful success for the entire regional economy.”

According to Christophe LECOURTIER, the CEO of Business France, “Business France applauds the decision by QUECHEN because this type of greenfield investment is a standout among the acquisitions or equity holdings made by Chinese investors. In the long term, this investment will act as a showcase for other Chinese industrial companies. As it stands, there are already more than 600 Chinese companies based in France that employ more than 45 000 people.”

According to M. Jean-Luc CHAUVIN, the president of Provence Promotion and the president of the Chamber of Commerce and Industry Marseille Provence, “We have taken a truly fantastic step and I congratulate M. QUE and his team for having recognized the economic appeal of our territory, an appeal that is often underestimated. QUECHEN SILICON CHEMICAL is an emblematic project that will, without a doubt, be the first in a long series of Chinese capital investments. The innovative leadership shown on the QUECHEN implantation project represents a new method for the territory to enhance its overall economic attractiveness and to accentuate the role that the PIICTO platform serves as a hotbed for the Industry of the Future. We are now forging a dynamic new form of public and private sector cooperation. Over the past two years, close to two dozen Chinese and French entrepreneurs and companies such a Tanya Saadé (CMA-CGM), Gérard Deman (France Chimie Méditerranée), Total, and Petroineos have served as our ambassadors to help lead our territory to the top.”

The Aix-Marseille-Provence Metropolis has already attracted more than a dozen Chinese companies and capital investments, including Weichai Power, Petrochina, Watchdata, Tinno, with its recent purchase of Wiko, and the
Marseille International Fashion Center 68 (MIF 68), the new platform for international trade with China.

As part of this commitment to attracting and supporting Chinese investments, the Port of Marseille Fos and Provence Promotion will be part of the France Pavilion at the China International Import Expo 2018 that runs from November 5 to 10. The objective of this trade mission is to present the territory’s range of logistical and industrial platforms in order to attract further investment projects.

Get ready for Oi in San Diego