The Women of the 20th Century… 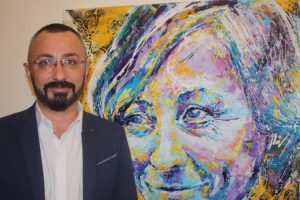 The Women of the 20th Century: Valentin Kardamski’s dramatic portraits on show in London

Dashing portraits in acrylics of two dozen of the most recognisable female faces of the 20th century are on display in a new show in London.

They introduce dramatically to the UK the talent of Valentin Kardamski, who is a journalist, public relations adviser to the Bulgarian Socialist Party, and… celebrated painter in his homeland. It is his first exhibition in London; all the others have been in Bulgaria. 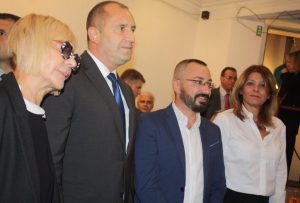 The Women of the 20th Century is organised under the patronage of the President of the Republic of Bulgaria, Rumen Radev, who with his wife Desislava Radeva attended the opening evening on October 17 at the Bulgarian Cultural Institute’s Sofia Gallery in Kensington. The president was on a state visit to the UK.

Valentin Kardamski’s likenesses of illustrious women are acutely true to the character we know they possess or possessed: authoritative portraits of authoritative people,

In one way or another the subjects have had considerable impact on society, and the artist treats them face-on. The names to conjure with include Queen Elizabeth II, Princess Diana, Queen Giovanna of Bulgaria, Queen Rania of Jordan, Mother Teresa, Maria Callas, Frida Kahlo (looking a little more conventional than we are used to seeing her), Coco Chanel, Edith Piaf, Madonna and Indira Gandhi. 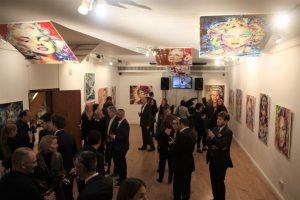 Women to look up to.

Amy Winehouse is included, although her short career is properly of the 21st century. She lived from 1983 to 2011, and her debut album came out in 2003.

Thanks to an ingenious ‘hang’ in the gallery, guests had to raise their gaze to marvel at several of the imposing paintings suspended from the ceiling. Up ‘in the air’ were likenesses of Greta Garbo, Marlene Dietrich, Marilyn Monroe and Whitney Houston.

This painter who spurns using paintbrushes variously describes his style as “emotional realism” – certainly they carry an agreeable sensuality – and “construction pop art.” 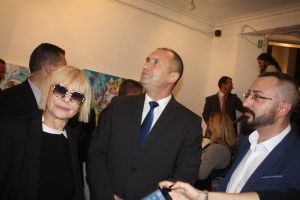 At the London inauguration of the array of compelling images, he asserted: “These women need to be seen, [their presence] needs to be felt.” He said that any admiration should be “not for me, but for these women: they are the ones who deserve it.”

He accepted that it is beyond the power of one artist to paint all the women who merit such respect, but this was a beginning – he has said that with more creative time at his disposal, he could have added for instance Anna Akhmatova, Evita Peron, Marie Curie and Queen Victoria. 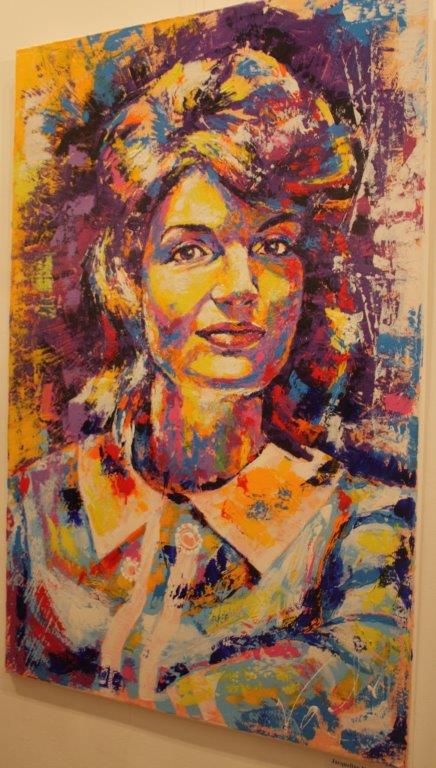 He keeps faith with his principles and his method: he had been urged to paint peace motives, but within his canvases is what he called a “peace rally.” The big picture is that he perceives politics and art as interrelated because with only a few strokes you can say a lot, just as a good politician needs to say only a few things to identify what is important to people.

He has said in interviews that it is not so easy to speak only the truth, and people look similar when they are made-up for a TV show.

Valentin Kardamski was introduced to the gathering by arts consultant Ioanna Peeva, supported by Miglena Rogacheva, assistant to Svetla Dionisieva, the director of the Bulgarian Cultural Institute,.

He means his portraiture to be more than simply a matter of viewer recognition: he wants to break free from academic ways of painting to follow his own path as he seeks out the character, feelings and soul of the subject.

He had begun this series before receiving the proposal that he exhibit in London, and had completed the portrait of Marilyn Monroe, and followed it by that of Frida Kahlo.

Given that the theme is women who changed the world through culture, art and politics, he has been asked: what was Marilyn Monroe’s contribution to such transformation? His reply is that she became an ideal of beauty, a driving force for many women. 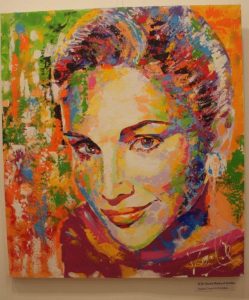 He is unafraid to use bold and contrasting colours, for with the right geometry one colour can embrace another, as in the bright red and green in the portrait of Coco Chanel, whose fashion ideas broke from “lace and crinoline” notions and who was a patron of the arts. “No one can escape from the colours that the painter can see and would like to use.”

Swirling with lyrical colour, the portraits are strongly individual, while the style is replicated. One reason for this is his method of applying paint. “I threw away the brushes. Brushes no longer contribute anything new to art. People consist of numerous emotions and the brush cannot create that.” He says that with trowel, spatula and old credit cards he applies layer upon layer of paint on the canvas, so that the flesh of his ‘sitters’ can start to materialise. 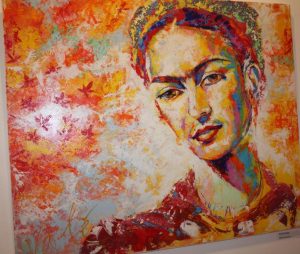 Sofia-based Valentin Kardamski was born in Kardam, a village in north-eastern Bulgaria. These days he moves in political circles and had a major exhibition of his painting in the National Assembly. The president of the Party of European Socialists, Sergei Stanishev, has called him one of the most innovative and provocative modern artists that Bulgaria has. Another politician, Iliana Iotova, has said that the great Bulgarians of the 20th century come alive in his paintings.

As well as international figures, he has painted portraits of leading Bulgarian artists, politicians and entrepreneurs. 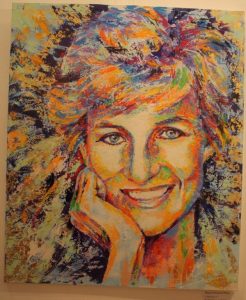 The first study to be seen on entering the London exhibition is that of Giovanna, Tsaritsa of Bulgaria who lived from 1907 to 2000. The Italian-born Princess Giovanna of Savoy married Tsar Boris III of Bulgaria in Assisi in October 1930 and was also known in the Black Sea nation as Ioanna. Boris died in 1943 and when towards the end of World War II, Bulgaria was invaded by the Soviet Union Giovanna and her son Simeon were placed under house arrest until the new Communist government gave them 48 hours to leave the country. After fleeing to Alexandria to join her father, Victor Emmanuel III, Giovanna moved to Madrid and later to Estoril, Portugal, for the rest of her life. She returned briefly to Bulgaria in 1993, when she visited the site of her husband’s grave and was greeted by large crowds.

A royal figure enjoying a more settled life has been Rania, Queen consort of Jordan, and this serenity is evident in Valentin Kardamski’s portrait. Born in Kuwait to a Palestinian family, Rania later moved to Jordan, where in 1993 she met her future husband Prince Abdullah, now King of Jordan. She is active in the fields of education, health, community empowerment, youth, cross-cultural dialogue and micro-finance. 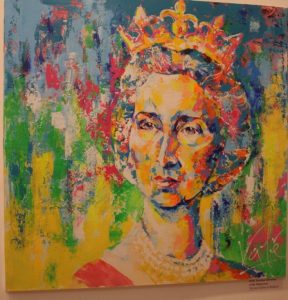 Famous contemporary Bulgarians portrayed include Neshka Robeva renowned for instigating the Golden Girls Century of generations of European, Olympic and world champions in rhythmic gymnastics. She and her protégées won a total of 294 medals, and they were known as the Golden Girls of Bulgaria.  Lili Ivanova, the “prima of Bulgarian popular music” is seen on full song, and stage and film actress Stoyanka Mutafova earns a sympathetic rendition.

In its written invitation to the exhibition, the gallery called in aid the long view of female advancement as it affirmed: “Napoleon may have said that behind each successful man there is a strong woman. But there are countless women who themselves have changed history thanks to their strong will, faith and spirit, who stood alone against the codes and canons of their time and succeeded. Such effort deserves honour and respect.” 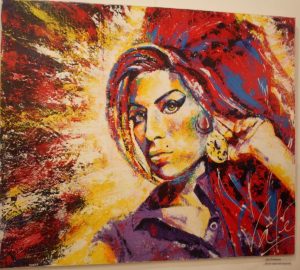 Notwithstanding his success, the artist has spoken of his concern that many people in the sphere of art and music in Bulgaria are finding it hard to make a living.

Valentin Kardamski has compared painting in its constant evolution to music, so it was fitting that the Bulgarian-born pianist Savelina Kancheva, who has a successful career based in London under the name Sally Wave, was present to enthral the gathering. She delighted with her new, poetic arrangement of Summertime, the first song from the opera Porgy and Bess, in honour of Mr Kardamski, who enjoys the music of George Gershwin. The remainder of her superb programme tailored to the event included two further songs of Gershwin, several waltzes by Chopin and pieces by Debussy and Schubert.

Further hospitality was offered to members of the crowd at the private view in the form of Bulgarian wine and banitsa and other savoury snacks. 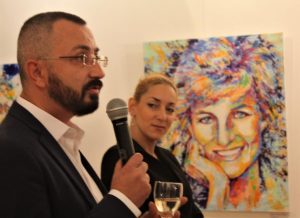 The following day, President Radev and Ms Radeva had an audience with Queen Elizabeth II and invited her or a member of the royal family to visit Bulgaria in 2019, on the 140th anniversary of the establishment of diplomatic relations with Great Britain.

Earlier Mr Radev was back at the embassy to meet some 200 members of the Bulgarian community in the UK. During his address, he told them: “Thank you for dispelling the myth that Bulgarians come here to take advantage of the welfare system. On the contrary – statistics show that you add great value and contribute to the economy here.” He urged young Bulgarians educated in British universities to consider returning to share their intellectual capital and knowledge of accountable institutions for the benefit of their native country. 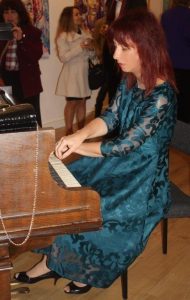 The president is a supporter of what is known as the Three Seas initiative which is aimed at strengthening economic integration between 12 European Union states located between the Adriatic, the Baltic and the Black Seas: Austria, Bulgaria, Croatia, the Czech Republic, Estonia, Hungary, Latvia, Lithuania, Poland, Romania, Slovakia and Slovenia. In September 2018, in Bucharest to take part in a Three Seas summit, Mr Radev stressed that “without connectivity and integration we cannot achieve quicker convergence and the enormous differences which still exist between Eastern and Western Europe cannot possibly be eliminated.”

Mr Radev has been Head of State since January 2017. During his military career, he achieved the rank of General and was a pilot First Class with more than 1,400 flight hours. 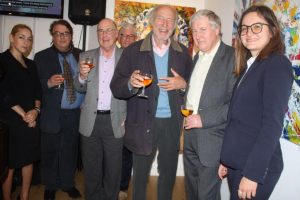 The Women of the 20th Century: paintings by Valentin Kardamski is at the Sofia Gallery, Bulgarian Cultural Institute, 188 Queen’s Gate, South Kensington SW7 until the end of October 2018.

Drugs and Alcohol at Sea