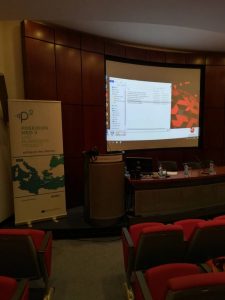 1. Snapshot from the panel, Poseidon Med II event at University of Nicosia

“Setting the scene for LNG as marine fuel in East Med”

The achievements and milestones of the European co-funded project Poseidon Med II (PMII), was the focus of the discussion on October 18th 2018, during an event that took place at the University of Nicosia. Participants represented the academic community; professors and students, PMII partners, as well as the EU co- funded project CYnergy.

The event was officially opened by Dr. Theodoros Tsakiris, Director of Energy Studies, School of Business, University of Nicosia. Dr. Tsakiris made at his introductory speech as Moderator of Session No.1 the comment that marine transportation could in fact move to a much cleaner fuel such as LNG. Ms Maria Fotiadou, Corporate Development Activities Division Head at DEPA S.A welcomed the audience and placed an emphasis on the safety aspects of the LNG.

Mr. Stefanos Chonianakis, Associate Corporate Development Activities Division of DEPA S.A, delivered the first presentation on what constitutes a holistic LNG supply chain and how this will be brought to life in the area of Eastern Mediterranean through the project’s activities. 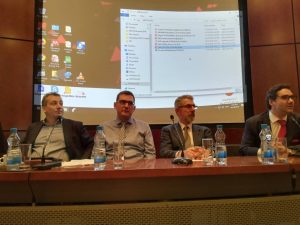 First session was concluded with the presentation of Mr. Antonis Boutatis, Managing Director at ROGAN ASSOCIATES S.A. who talked about the value of investing in LNG infrastructure and the work in progress in the various participating ports of the project.

Session No.2 was moderated by Dr. Constantinos Hadjistassou, School of Engineering, UNIC who gave the audience an overview of the LNG market developments.

Afterwards, specific emphasis was given to the Clean and Green Shipping and especially to the innovative vessels’ designs and barges by Mr. Ioannis Bakas, Technical Manager of HELENGI. Mr Bakas made conveyed two clear messages; that LNG bunker vessels designs are mature enough to materialize and that the retrofit of LNG designs of existing tonnage are already available and ready for the procurement process.

Ms. Anastasia Kouvertari, Project Manager for the EU co-funded project CYnergy on behalf of HELLENIC LLOYD’S S.A., gave the final touch of the Regulations for LNG Bunkering in Greece and specifically presented the regulatory status quo, namely the Presidential Decree for LNG Bunkering. Issues like Safety Zones, fire-fighting, training & competence and port and vessel manuals dealing with LNG Bunkering were placed high on the agenda.

The event was concluded with a Q&A session, which triggered a vivid discussion, especially on the commercial aspects as the major dhow stopper in the uptake of LNG, its pricing and also issues relating to the training of personnel involved in the LNG bunkering supply chain and the active involvement of Ministries and competent Authorities.