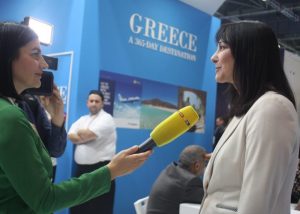 Greece has confirmed that it wants to establish six new home-ports for cruise ships as part of its drive to expand the thriving tourism industry.

Tourism minister Elena Kountoura said it was “our aim” to have more than six such ports and “we are co-operating with major international cruise lines.” She added: “We work closely with global and European cruise lines to introduce new, attractive destinations.” 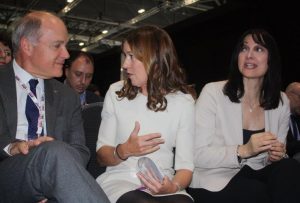 She was speaking on the first day of the World Travel Market 2019 in London where she announced that the country had achieved new tourism records.

Terminals enjoy economic benefit from being designated as home-ports, as ships and their passengers spend more time boarding and disembarking at such centres, generating extra income for shore facilities. Greece wants to compete more vigorously with Italy and Spain in providing cruise base facilities.

Piraeus is in the lead in Greece with expansion planned in the southern part of the harbour ultimately to host up to four next-generation cruise ships of more than 400 m in length, while Heraklion in Crete is also in a strong position.

In all there are 20 large-ship cruise ports, with Mykonos, Corfu and Santorini among the most popular. 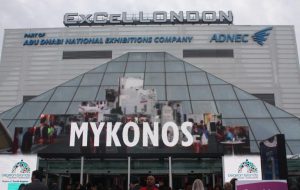 Greece to the fore at World Travel Market.

The minister declared: “The cruise sector is a top priority for us.  Greece is one of the leading European cruise destinations, as it has the most diverse complex of islands in the Med and Europe.”

As part of the maritime-related offering, Mrs Kountoura wanted to see new direct flights to Greece from foreign airports, and more medium-sized marinas.

The minister said that there had been four years of continuous and steady tourist growth, and performance had met every expectation in 2018, which was the best year to date. She claimed that the government of which she is part was the first to recognise the value of tourism as a driving force for the whole national economy and to recognise the country as a 365-days a year destination, “a goal now becoming a reality.”

A 33% increase was achieved in inbound tourism in the last four years, with historical records in earnings and revenue, at double-digit growth. 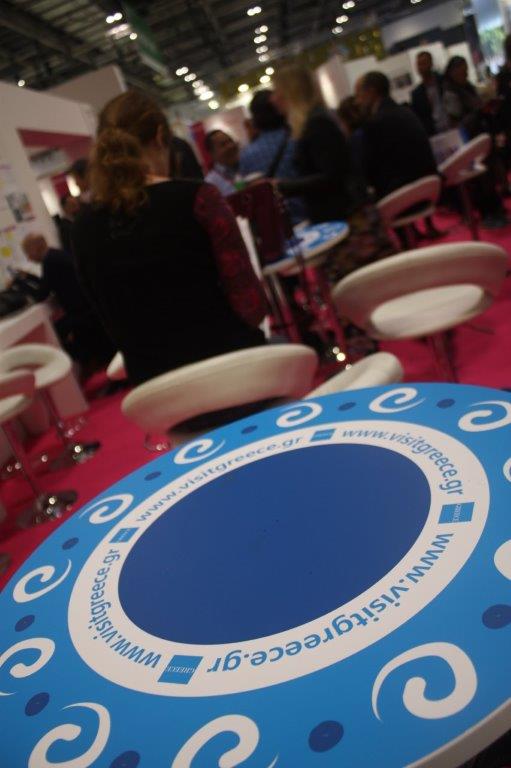 Greece tables its message at WTM.

By the end of 2018, Greece will have welcomed 32m international arrivals, including cruise passengers (almost 2m more than the previous year). The number is more than three times the country’s population.

In addition to the traditional European market, said Mrs Kountoura, efforts were underway to win more visitors from the Middle East, Russia, China, India and other Asian markets.

Greece was creating a friendlier business environment and attracting new investment. Tourism was a huge export earner, accounting for 10% of gross domestic product, and almost 1m jobs were linked to tourism, with 330,000 more were expected to be created in the next 10 years.

Among her audience at her presentation was the Greek ambassador to the UK, Dimitris Caramitsos-Tziras.

Guest speaker Victoria Hislop, acclaimed author whose books have been translated into 55 languages, spoke of her passion for all aspects of Greece, “a non-stop fountain of ideas for my writing.” 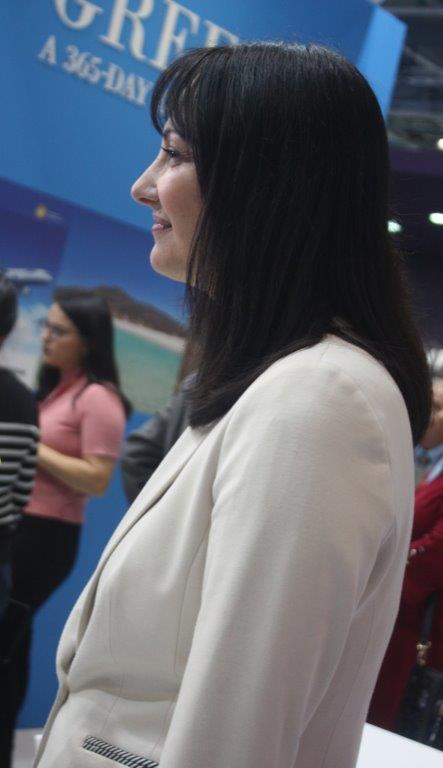 Minister is delighted at tourism boom.

Her initial inspiration was a visit to the abandoned leper colony of Spinalonga giving rise to The Island which sold 5m copies worldwide and was turned into a 26-part series for Greek television. Her third novel The Thread saw her return to Greece for a story about the people of Thessaloniki, beginning with its Great Fire of 1917 which almost destroyed the city.

She is researching for a book which is going to be set in the Cyclades. She spoke of spending a recent idyllic day in Kythnos, encountering a newly-excavated Mycenaean town, swimming, enjoying near-solitude on a golden beach, and ending with a meal of fresh squid and slow-cooked goat and wine for which with the bill for two people came to Euro35.

She has explored many parts of the country since her first visit in 1970 and said: “Greece is not one destination; it is many destinations.”