Plummeting Markets thanks to the Capes …et al… 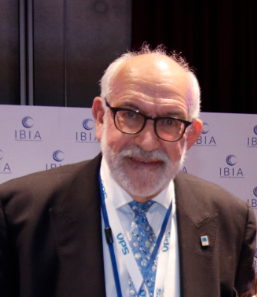 The BDI (Baltic Dry Index) lost 84 points and now stands at 1,147 points; Geopolitics still in disarray and IBIA dominated the week with its 2018 Convention in Copenhagen. John Faraclas’ daily and weekly recap:

The Capes’ BCI lost another triple-digit, 286 points …“evaporated” and now at 1,461 things are getting sour… On a weekly basis the losses were a four-digit number: 1,041… (down from  2,502 points). Ultra-caution should be observed.

Thanks to …Posidon, the Panamaxes lost a single point and the BPI now reads 1,495. On a weekly basis the loss was 35 points – down from 1,530 points… a controlled loss so to speak…

Minus two points for the Handies with the BHSI reading 656 points. The weekly loss was ten points – from 666!

All in all a plummeting Dry Market with the volatile Capes sending warning messages.

The Geopolitical spectrum raises some grave questions as well as issues some of which remain unanswered and unresolved AND some other will create havoc with incalculable repercussions:

The Migrants – in Europe and the new Latin America /USA adventure; The Middle Eastern Wars, the situation in the Balkans, Black Sea and East Med…; Saudi Arabia for a multiple of reasons, Iran, Israel  and the Palestinians…The European Union with the BREXIT – with resignations and possible others to come, the Greek and the Italian saga… The Turkish blackmail and threats by Turkey against nations in its periphery… The aftermath of the mid-term elections in the USA… The Bolsonaro effect in the entire South America… The Chinese counter on all issues… The Japanese waiting game. The bloodbath in Afghanistan – remember always the faulty zone from Gib to Afghanistan and from the Caucuses to the Horn of Africa… Africa’s future and Putin’s agenda are the most important issues…

This coming Sunday is Remembrance Sunday and also the Centenary since guns of the Great War  (WWI) fell silent. We will never forget all those and their sacrifice for Peace, never! British Prime Minister Theresa May laid a wreath honouring the first and last soldiers of the Empire killed in the Great War during her visit in Belgium at Mons’ St. Symphorien Military Cemetery. 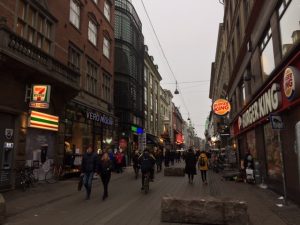 The entrance of the pedestrian shopping street, the famous Frederksbgade

This coming Sunday marks also 106 years from the day the Island of Chios in the Eastern Aegean was liberated by the marines of the Greek Fleet from the Ottoman yoke in 1912! It is the Day of the Saints Minas, Victor and Vicentios – the blessed local saints!

On another tone and note following the end of the three-day IBIA’s event in Copenhagen, decided to stroll around the Danish capital and unwind as well as meet the locals and tourists and continue our survey on what the public has to say about the situation in its country, Europe and the World at large. I took a short route from the Scandic Kødbyen hotel – were the convention took place at Skelbækgade and via Halmtoryet,  Frederiksgadem – Vimmel, Amager Torv ended up at Ostergade, a pedestrian street full of shops and real life. 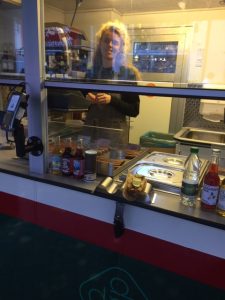 Sissel at the DOP kiosk

Time to eat and chosen the tried and recommended  DØP stand/kiosk, which excels at the  organic hot dogs –  filled with onions and sauce as well as with local … made specialities and served by Sissel, a politics student at the university there and recommend same to all; the taste!

Bought some souvenirs and Christmas gifts from the largest of the three Det Gamle Apotek before buying a cold local beer from the nearby drinks and sweets mini-restaurant/café run by a well-mannered Argentinian young lady with Philellene ideology and love for Greece and its people!

There were Greek tourists too, some of whom were visitors from the World Travel Market in London! The entire area that I walked was under road works-improvement but well sign posted and safe! 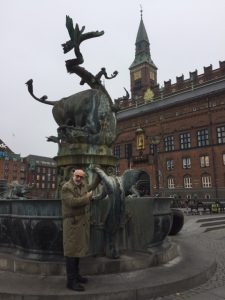 Trying my best with the seawise creatures…

Back to the hotel to get ready for the airport and say good bye to the IBIA’s FAB team and some delegates still there. Took the overground tube and then from the main station the train to the airport. Very helpful people and good train services.

Have a nice evening and weekend but ensure you remain on guard from Pirates, Terrorists and any Criminal whatsoever wherever you are on Planet Ocean!