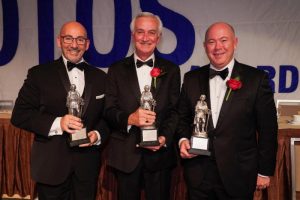 NEW YORK, NY (NOVEMBER 7, 2018) – The significance of the merchant mariners and the importance of improving their lives in the future was the theme for all three recipients of The United Seamen’s Service (USS) 2018 Admiral of the Ocean Sea Awards (AOTOS) presented at the 49th annual gala on November 2. The awards were presented by Kenneth R. Wykle, LTG, USA (Ret.) before some 600 maritime industry leaders to Salvador “Tony” Bruno, President and CEO of Hapag-Lloyd USA; Paul Doell, National President of American Maritime Officers and Raymond F. Fitzgerald, Chairman of the ARC Group, one of the leading U.S. Flag transportation and logistics enterprises. The American maritime industry’s most prestigious awards were presented at the 49th annual gala at the Sheraton New York Times Square Hotel, New York City.

Tony Bruno is the President and CEO of Hapag-Lloyd USA, LLC. He has devoted his entire career to operating American liner services.In his speech, he called for a revival of U.S. merchant marine industry.

“The youngsters that are taking over our industry today need to learn from its history. They need to be proud to be merchant mariners and proud to be U.S. flag carriers.”

Mr. Bruno has held various leadership positions while at Hapag-Lloyd. In 2006, he was appointed as Sr. Vice President in Genoa, Italy; where he managed operations in 26 countries across the Eastern Mediterranean, Black Sea and North Africa.

Paul Doell serves as National President of American Maritime Officers — an affiliate of the Seafarers International Union of North America —a position he has held since December 2014. In his remarks during the event, Mr. Doell stressed the urgent need to promote, sustain and expand the U.S. merchant fleet in international trade.

“I have absolute confidence in the spirit and character that define the American merchant mariner, the loyalty and courage that have driven our mariners in wartime from the Revolution through World War II, Korea, Vietnam, Operations Desert Shield and Desert Storm in the Persian Gulf in 1990 and 1991 and most recently in Afghanistan and Iraq.”
Mr. Doell served eight years as the union’s Legislative Director in Washington DC, where he worked with key figures in both political parties to promote the privately owned and operated U.S. flag merchant fleet to sustain jobs for civilian American merchant mariners in domestic and international trades.

Raymond F. Fitzgerald is Chairman of the ARC Group, one of the leading U.S. Flag transportation and logistics enterprises. His career in the maritime industry began in New York in 1984. He spent 13 years with the Crowley Maritime Group of companies, where he held several executive positions. From 2011 through 2016, Mr. Fitzgerald was President of Wallenius Wilhelmsen Solutions’ shipping and logistics activities across the Americas and EMEA.

During his speech, Mr. Fitzgerald highlighted the importance of ensuring US mariner jobs and a sustainable US flag fleet of commercial vessels.

“Collaboration in this public/private partnership is key. It’s the secret sauce for how we support our service members – it’s how we all do our small part to help sustain a national defense.”

Prior to his current role with ARC Group, Mr. Fitzgerald served as President and CEO from 2007 to 2011.

Proceeds from the AOTOS event benefit USS community services abroad for the U.S. merchant marine, seafarers of all nations, and U.S. government and military overseas. The recipients shared the evening with a group of American seafarers who were awarded for their outstanding acts of heroism at sea.
For AOTOS 2018, The Honorable Cory A. Booker was Honorary Chairman. Michael Sacco, President of the Seafarers International Union, served as Dinner Chairman. F. Anthony Naccarato of American Maritime Officers Service and Joseph Cox were National Committee Co-Chairmen.

The USS’ prestigious annual Admiral of the Ocean Sea Award dinner has been honoring American maritime management, labor and government leaders since 1970. The proceeds from this event help the USS to maintain services for seafarers against the ever-increasing cost of operations. But further support is still needed from both the maritime community and the general public to ensure these vital services for seafarers can be continued and also to enable the USS to improve its facilities moving forward.