A Remembrance Day to remember 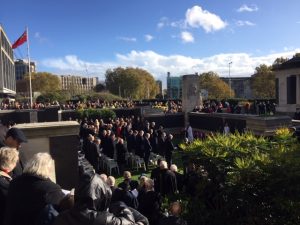 This year’s Remembrance Day was beyond the usual one which we normally attend, write or simply think of…

This year marks a century since the Armistice, when the guns fell silent at 11:00 GMT, hence its special significance, bringing the end of the war, the end of The Great War –  World War One in 1918 as we know same today since we have also gone through the terrible and despicable Second one… 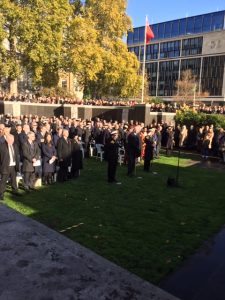 Another view from the service

The Shipping Industry honours the event at the Merchant Navy Memorial in Tower Hill and we managed to be there just on time – given the traffic, at the very place to honour those lost at sea and participate in this great event that The Honourable Company of Master Mariners  has the honour of holding a Remembrance Day service each year!

Worth noting that the First World War section of the Memorial has been described by the Foreign and Commonwealth Office as having the greatest international dimension of any of the memorials involved in the centenary commemorations. 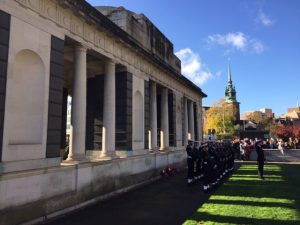 Among the 12,000 members of the Mercantile Marine and Fishing Fleets recorded on the First World War section represent 103 countries. Civilians, men and 54 women, all served under the Red Ensign. After the British contingent, the 27 nations with 20 or more named on the Memorial are these: 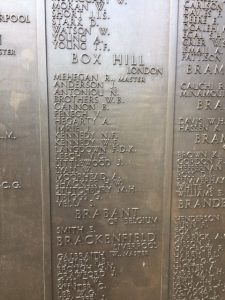 The “BOX HILL”; note the third name: Antoniou N from the top. One of the 160 Greeks who lost their lives…

China is included in recognition of the corresponding memorial in Hong Kong which bears 532 names of Hong Kong and Chinese members of the Mercantile Marine. Similarly in India, the Bombay 1914-1918 Memorial in Mumbai honours 1,706, one of whom is a woman. Together with that of the Merchant Navy in London, these memorials are in the care of the Commonwealth War Graves Commission and all have further sections for those killed in the Second World War serving with Britain’s merchant service, renamed in 1928 in tribute as the Merchant Navy.

All have no grave but the sea and all were remembered at the service today at 11:00. 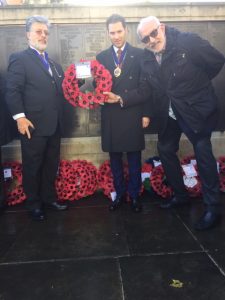 l to r: Jeffrey Blum with the current president of the ICS London Branch David O’ Sullivan holding the wreath and John Faraclas

Checking through the 12,000 names revealed the unique international nature of the First World War section of the London memorial.

Many friends from the Square Mile and beyond were present together with the Political, Military, and Diplomatic missions as well as many Seafaring Associations and for the first time over one thousand members of the public and tourists!

Capt Esteban Pacha, Wojciech Holub – regional port chaplain from the Apostleship of the Sea, Antony Vlasto, Prime Warden of The Worshipful Company of Shipwrights, Lt Cdr Philip Wake and his wife Mary, CMR’s Steve Cameron where there. Good to meet Peter Tomlin MBE CEO of the Merchant Navy Welfare Board and his wife Tina, Commodore Bill Walworth and Victoria White from HMCG!

Afterwards there was a reception at the adjacent Trinity House, the 504 year-symbol of the British Empire.

Again it was good to see many friends from the past and make new ones, particularly from the Academia and Seafaring organisations. 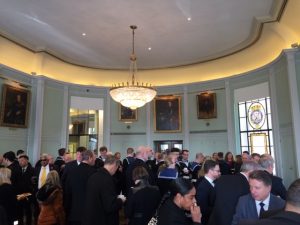 From the reception at Trinity House

At the other end of London, there was a two minutes’ silence at the Cenotaph and tributes on beaches with members of the Royal family, politicians, veterans and thousands from the public old and young with visitors from many countries commemorating the 100 years  since the Armistice!

The public have come together to commemorate. During the two minutes’ silence, Prince Charles laid the Queen’s wreath at the Cenotaph. 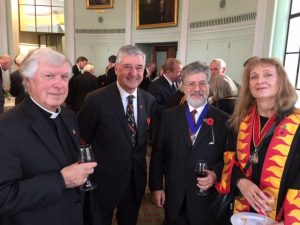 I am sure most of you all over Planet Ocean remained tuned into London and other cities, towns and villages in the United Kingdom for this special Centennial Anniversary.

My mind and thoughts were with my family, my vast family who lost ships and men during the course of the Great War, particularly to the first U boats. Same thing happened in the Second World War when  my father, a chief officer at the time on the “Tony” was torpedoed by a German U-boat and he survived! We lost also many relatives and ships…

All over Europe there were high ranking Germans, that nation’s president, prime ministers and others  participating in the event in an act of reconciliation, which, although counts it MUST become a guide in today’s world to avoid another warring saga. It is about time they got the message. Never ever again! In the meantime in my Motherland and Fatherland Chios, the famous Greek island in the Eastern Aegean  Sea there were celebrations and a mass to commemorate the 106th Anniversary of the island’s liberation from the Ottoman yoke by the Greek Marines of the then Greek Royal Navy, a great day as it was the day of the patron saints of the island, Minas, Victor and Vikentios! 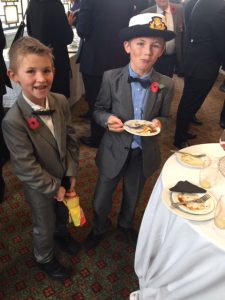 …and there were youngsters too; tradition and respect for all from a young age

The United Kingdom and Greece, Planet Ocean’s seawise-giant nations have fought together in both World Wars with their Merchant Navies at their forefront!

“At the going down of the sun and in the morning, we will remember them” – from the “Fallen” by Lawrence Binyon, September 1914.-

*With thanks to the Greek Embassy’s Press Office for sending Roger Hoefling’s valuable information… Roger Hoefling is a commentator on air display, naval and defence matters