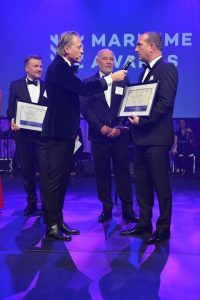 From the awards ceremony

The KVNR Shipping Award 2018 recognises a combination of successful realization and implementation with a vision for the future. The CARROUSEL RAVE TUG is a revolutionary design which makes it easier, safer and more environmentally friendly to work with seagoing vessels at much higher speeds than those which conventional tugs can achieve, and without the risk of capsizing. The CRT cannot capsize by towline force. It is cleaner and stronger, faster and safer. It uses the mass and momentum of the assisted ship to do its job.

Leendert Muller says, “We are delighted to have won the prestigious KVNR award. The CRT has been two decades in the making and its time has arrived. It not only represents a major improvement in terms of technology, performance and crew safety, but also results in much lower levels of fuel consumption than can be achieved with a conventional tug, resulting in savings of at least 40 per cent on an average operation.”

**Novatug is a subsidiary of Multraship formed to develop and market the unique CARROUSEL towing system.