Memorandum of Understanding (MoU) between ThPA S.A. and Rutgers University in the USA 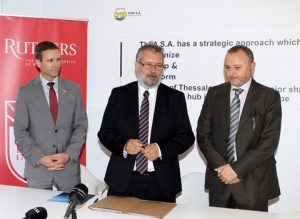 l to r: the Consul General of the USA in Thessaloniki, Mr. Gregory W. Pfleger, the BoD Chairman & CEO of ThPA S.A., Mr. Sotirios Theofanis and the Director of the Center for Advanced Infrastructure and Transportation of Rutgers University, Dr. Ali Maher

ThPA S.A. signed a MoU with Rutgers University, one of the oldest US higher education institutions.

The agreement was officially announced on Saturday 15th of September 2018, by the BoD Chairman and CEO of ThPA S.A., Sotirios Theofanis, and the Director of the Center for Advanced Infrastructure and Transportation of Rutgers University, Dr. Ali Maher, during the special event that was held at the Company’s pavilion, within the framework of the 83rd Thessaloniki International Fair.

The event was also attended by the Consul General of the USA in Thessaloniki, Mr. Gregory W. Pfleger.

The Memorandum of Understanding aims at developing common research, educational and know-how transfer related programs, projects and activities, in such fields as intermodal transport, ports and Logistics.

The BoD Chairman & CEO of ThPA S.A., Mr. Sotirios Theofanis and the Director of the Center for Advanced Infrastructure and Transportation of Rutgers University, Dr. Ali Maher during the event at ThPA S.A. pavilion

“This is a chance to exchange research experiences and apply new technologies at the Port of Thessaloniki, as an experimental field of practical application”, stated Mr. Theofanis stressing that the cooperation concerns, inter alia, the field of new technologies such as technologies for the “Port of the future” and environmental protection issues. Furthermore, cooperation also extends to other thematic areas such as the development of technologies for monitoring the state of the infrastructure and recording/managing the traffic of heavy goods vehicles arriving in the Port.

For his part, Mr. Maher stressed that maritime transport is a key component of our national economies underlining that ports like the one in Thessaloniki, are essential for both the regional economy and the national economy in Greece.

The CAIT Director stressed that both he and his associates are looking forward to this cooperation with the Port of Thessaloniki in order to face maritime transport-related challenges, such as goods and cargo handling, port asset management, resilience and, more generally, development of technologies and innovative solutions to address such problems.

In his short address, Mr. Pfleger stressed that the connections established within the framework of the 83rd TIF and, in particular, the educational connections with US Universities are very important for the US Consulate General in Thessaloniki and the entire diplomatic mission in Greece.

Rutgers University was set up in 1766 in New Jersey and now has 69 000 students and 22 500 teachers and employees. The Center for Advanced Infrastructure and Transportation, which constitutes the largest transport research center of Rutgers University implements research projects and programs in a number of thematic areas in the fields of infrastructure and transport. The new methods and technologies developed at research level, are also used in practice in real conditions.

Alongside research, the Centre trains over 7 000 professionals yearly through over 200 courses.