HAMBURG/KIEL – In the third quarter HSH Nordbank continued to focus its energies on the upcoming privatisation while generating a satisfactory Group net result in operations.
Thanks to savings on the cost side, a solid business performance and restructuring successes in the ship loan portfolio, the high costs incurred in connection with the privatisation were offset in full. The key capital and liquidity figures remain high.

“Thanks to the agreement reached in early November on the seamless transition of HSH Nordbank to the protection scheme of the private banks, we have now cleared one of the crucial hurdles for the change in ownership. We are on the point of completing the privatisation and expect the deal to be closed very soon – after which a new era will begin for the Bank”, said Stefan Ermisch, CEO of HSH Nordbank. “Our profound transformation into a sustainably profitable bank will be a tremendous accomplishment. Over the coming months we will unlock new potential and focus on establishing a commercial bank from the North with a clear
profile on the German banking market.”

The contract of sale for the Bank was signed on 28 February 2018. The future owners are the following private equity investors, which are independent of each other: Cerberus European Investments LP, J. C. Flowers & Co. LLC, GoldenTree Asset Management L.P., Centaurus Capital LP and BAWAG P.S.K. AG or funds initiated by these investors

Privatisation effects weigh on Group net result
The Group net result before taxes totals € 8 (prior-year period: 201) million and exceeds expectations thanks to a solid operating performance, marked cost reductions and reversals of loan loss provisions. High expenses for the second loss guarantee totalling € -188 (-116) million were a major burden on the result because a cash settlement of € -100 million was incurred for the early termination of the second loss guarantee, on top of the base premium.

Added to this were restructuring and privatisation costs amounting to € -49 (-43) million and the expense for the bank levy and deposit guarantee fund totalling € -34 (-41) million.

On the basis of earnings before taxes, the return on equity before taxes (RoE) for the Group amounts to 0.2% (31 Dec. 2017: -9.7%). Despite the improvement since year-end 2017, this performance indicator – which will be of crucial importance for the Bank going forward – is well below the target RoE before taxes of at least 8% by the end of 2021. Given expenses for deferred taxes of € -110 million as at the end of September, this results in a loss before taxes of € -102 (176) million.

The net income before taxes of the Core Bank contributed € 475 (668) million to the Group net result. The items for the entire Bank that are pooled under Others & Consolidation, including restructuring and transformation costs, negatively impacted the Group by a total of € -237 (-16) million. As expected, the Non-Core Bank, which is to be dissolved in the near future, also recorded a negative result before taxes, amounting to € -230 (-451) million.

Administrative expenses fall by 13% – sales of securities scaled back
At € 488 (993) million, the Group’s total income was at the expected level. In the previous year there was substantially higher income from the managed sale of securities realised to offset high charges from legacy loans of the Non-Core Bank.

Net interest income at € 398 (390) million recorded a slight improvement over the prior year period. This was due in large part to income from the operating business, while the encouraging performance of new business margins thanks to the Bank’s stringent profitability requirements was also noticeable. The positive response of market participants to the Bank’s privatisation has additionally been reflected in an improvement in funding spreads. This was counteracted by the noticeable burden resulting from the transformation-related accumulation of liquidity reserves and further refinancing costs.

Net commission income totals € 22 (52) million and thus fell short of the previous year’s
figure, which had been marked substantially by income from the restructuring of non-performing
legacy loans.

The result from financial instruments categorised at FVPL was marked by subsequent valuation effects in connection with the portfolio transaction and negatively impacted Group earnings by € -25 (159) million. In the prior-year period, the result was noticeably boosted by the positive forex result and appreciations in the Credit Investment Portfolio.

Net income from financial investments (including other income items) essentially reflects the substantially lower realisation gains from the sale of securities compared to the previous year and contributed € 101 (406) million to total income.

On the cost side, the Bank has made further progress by lowering administrative expenses by around 13% to € -319 (-366) million. In particular, targeted cost management and savings on projects and buildings reduced operating expenses to € -159 (-184) million. Personnel expenses of € -144 (-167) million reflect the scheduled decline in the number of FTEs, which fell by 206 to 1,720 compared with year-end 2017.

The cost-income ratio of currently just under 60% still is well above the target figure of no more than 40% to be achieved by the end of 2021. Substantially improving this ratio on the basis of clearly identified earnings and cost potential will be a key task once the deal is closed.

Solid performance of the operating business

The operating business showed a solid performance in the first three quarters, although the volume of new business at € 5.4 (6.4) billion remained below the previous year’s level amid a competitive setting, due to the strict earnings and risk parameters. Taken together with around € 0.4 billion in loans earmarked for syndication, largely from the real estate sector, newly contracted financing came to € 5.8 billion. The encouraging trend of new business margins is, however, evidence of the Bank’s increasingly successful focus on profitability.

In the Real Estate Clients segment the Bank took advantage of its good market position to underwrite € 3.2 (3.4) billion in new business. The Corporate Clients segment contracted € 1.8 (2.4) billion amid an intensely competitive environment. In terms of financing in Shipping, the previous year’s level of € 0.4 (0.4) billion was maintained as a result of strict risk/return criteria.

Loan loss provisions substantially positive after reversals in the ship portfolio
The loan loss provisions within the Group total € 60 (-332) million after currency effects and the hedging effect of the credit derivative, having benefitted from recovery trends on the relevant markets and reversals due to successful restructurings in ship financing.

In the wake of accounting pursuant to IFRS 9 and the resultant measurement of portfolio transactions at fair value, and with the continuing run-down of legacy loans, the Non-Performing

Exposure ratio was more than halved to 4.5% as at the reporting date compared  with the year-end 2017 figure of 10.4%. Following the completion of privatisation and the sale of non-performing loans in the Non-Core Bank to investors (portfolio transaction), the Bank will be virtually free of legacy assets and have an NPE ratio of around 2%, which is low even by European standards.

The Group’s total assets continued to be reduced as scheduled to € 61.3 (31 Dec. 2017: 70.4) billion in line with the ongoing transformation and due to reduced loans and advances to banks.

Outlook
The Bank expects considerable additional burdens, especially restructuring expenses in connection with the privatisation and ongoing transformation process, and still anticipates a loss before taxes amounting to around € -100 million for the financial year 2018. The outlook could change upon closing of the entire sale, which is expected soon. 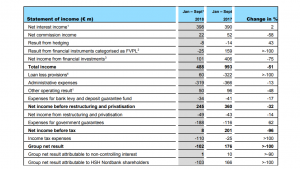 5 From March 2018, the capital ratios will no longer be shown taking into account the regulatory relief effect of the federal state guarantee. To enable a comparison with the key capital figures as at the reporting date, “pro forma” ratios are shown as at 31 December 2017