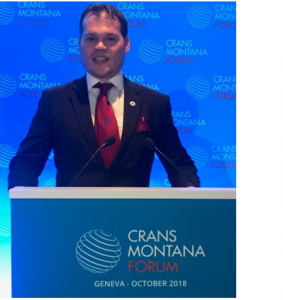 GENEVA – The longstanding outgoing Shipping Professional Network (SPNL) Chairman, Claudio Chiste, was presented the New Leader Award from the prestigious Crans Montana Forum for his work in promoting and empowering the next generation. After handing the reins over to Patricia Schlotmann, SPNL’s first female Chairman, Claudio will now take over as President of the international network of the Shipping Professional Network (a two-year appointment, to rotate thereafter around each international chairman), to manage and drive internationalisation.

Crans Montana Forum, comparable to the World Economic Forum held in Davos, attracts leading international figures such as former French President Nicolas Sarkozy, Rev. Jesse Jackson, Ukrainian’s own “Iron Lady” ex-Prime Minster Yulia Tymoshenko to name but a few. After serving as SPNL chairman for seven years, Claudio played a key role in cementing SPNL firmly within the established shipping community, being recognised and regarded as part of the maritime fabric alongside organisations over a century old.
Claudio took over the reins following the formalisation and incorporation of SPNL as a registered company. Whilst chairman of SPNL, Claudio worked at INVESTEC Bank, within the Corporate & Institutional Banking division. The key milestones during his term include:
• Charity involvement. Being a former seafarer as an Officer in the South African Navy, Claudio has been a supporter of seafarer welfare. The Mission To Seafarers, which support 1.3 million of the world’s seafarers, has become a key charity for SPNL.
• Launch of London International Shipping Week (LISW), with SPNL featuring as a key supporting organisation, offering “fun professional networking”. LISW features over 70 events, with the SPNL event having established itself as the “go to” event with past events attracting the Minister of Shipping, Lord Mayor and not to mention members of the LISW Steering Committee. 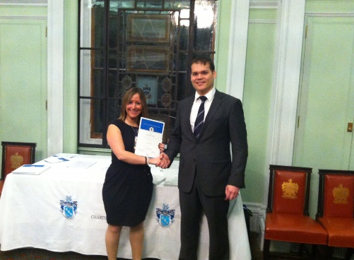 • Launch of prize award for up and coming students from the Institute of Chartered Shipbrokers (ICS) and Plymouth University
• Launch of the SPNL Moore Stephens Confidence Index, the first ever periodic survey aimed solely at the next generation in shipping to hear their voice and assess the investor confidence index.
• Launched the SPNL FutureLondon report: An initiative to ensure London’s continued position as a premier maritime service centre, with key recommendations on continued attraction, nurturing and retainment of talent and investment. This consisted of four workshops, with the highlight being hosted at the House of Lords, hosted by former Shipping Minster Lord Clinton-Davis.
• Winning the world’s Best Shipping Network Award at the Trade Finance Global Shipping Awards.
• Launch of international branches in Hamburg, Copenhagen, South West England and Mumbai.
• Promotion of London’s hidden maritime past amongst the next generation by organising guided walks, to ensure little known history lives on with the next generation. Well known City of London walking guides included Sean Gay, who is the Hon. Historian for the Worshipful Company of Shipwrights, as well as Wing Commander Mike Dudgeon OBE DL, the then Vice-Lord Lieutenant for the Greater London.
• Signing of MoU with Maritime London, with the then Lord Mayor, Lord Mountevans, towards the active promotion of the maritime industry.

Reflecting on key influencers Claudio commented, “Key individuals responsible for the development of SPNL, particularly the early years, I would single out Mark Brownrigg OBE, former Director General of the UK Chamber of Shipping, for believing in the next generation and being our first official industry backer. Also, Gustav Ellingsen, former Chairman whose energy was contagious creating the momentum and all the board members I have served with, each played a role in the realisation of our growth and maturity as an organisation.” 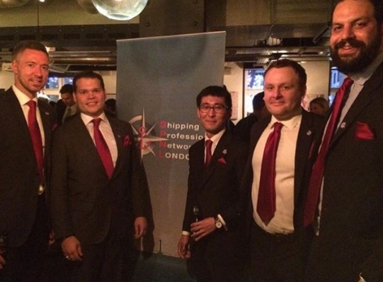 Although all SPNL Board members are volunteers, who carry this out alongside their actual “day job”, the team take on their roles with 100% dedication. An example of this, Claudio recalls an incident involving the chair & co-founder of SPNH (Hamburg), Isobel Dressel, who had expressed a desire to launch an SPN branch in Hamburg.

As a strong sign of her commitment, she flew in from Hamburg specially to attend an evening SPNL event, only for her to fly out early the next day to be back in the office. Given she was a junior member within her work organisation at the time, and that she did this entirely out of her own pocket, the Board needed no further convincing of her dedication.

It is stories such as these which differentiates SPNL… Long may it continue!

Five options if UK rejects May deal, Balancing the roles of the ECB