Baleària begins retrofitting the Nápoles, the first of six ferries it will switch to LNG 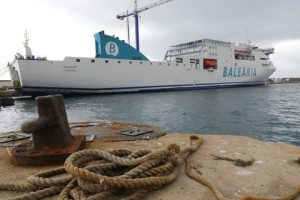 The ship will reduce its carbon dioxide emissions by more than 9,000 tons a year

The shipping company Baleària has begun retrofitting its Nápoles ferry to be powered by liquified natural gas. The ferry arrived at the Gibraltar Gibdock shipyards yesterday where they will modify the engines and install an LNG tank with the work expected to be completed by February 15th.

Thus, the two engines currently on the ship (MAN9L48/60) will become 9L51/60DF versions which are dual-fuel liquefied natural gas and diesel engines produced by the company MAN Energy Solutions. With this change in fuel, the ferry Nápoles is expected to reduce its CO2emissions by 9,113.45 tons and NOx emissions by 871.37 tons a year as well as fully eliminate all sulphur and particle emissions (which accounts for 75.95 tons of SOx). The annual carbon dioxide reduction will equal the emissions of 6,000 passenger cars (or the effect of planting 18,000 new trees). Plans are also underway to retrofit its twin ship Sicilia in the near future.

Moreover, a Wärtsilä tank will be installed in the ship to be able to store up to 440 cubic meters of liquefied natural gas so the ship may be autonomous for up to 1,200 miles. The gas pipes will be supplied by Cryospain while the engineering project has been designed by Cotenaval.

The total investment in this retrofit is 12 million euros with 20% funded by European Union CEF (Connecting Europe Facility) funds after the project involving retrofitting to use LNG in five of the fleet’s ships was classified as excellent. Therefore, Baleària not only has plans to switch the engines in the Nápoles but also in the ferries Abel Matutes, Sicilia, Bahama Mama and Martín i Soler as well as another ferry without help from CEF funds by the end of 2021.

The use of liquefied natural gas as a fuel is one of Baleària’s strategic commitments in order to comply with social responsibility and economic profitability criteria. Along these same lines, the shipping company is also currently completing the construction of the first two smart ships with LNG engines to sail the Mediterranean (the Hypatia de Alejandría will begin operating at the beginning of 2019 and the Marie Curie a few months afterwards) in addition to the first fast ferry in the world for passengers and cargo propelled with dual-fuel LNG engines.

“The lower pollution, higher profitability axiom really works with this fuel,” says the Chairman of Baleària, Adolfo Utor. “We plan to have at least half of our fleet of ferries sailing with this clean energy within the next three years and reach one hundred percent of the fleet within ten years,” he concludes.

Liquefied natural gas is one of the most environmentally-friendly fossil fuels to exist. It uses leads to a 30% drop in CO2 emission, 35% NOx and the complete elimination of sulphur and particles which has an immediate effect on air quality improvement and reducing the greenhouse effect.

The shipping company has been working on liquified natural gas-related projects since 2012. Thus, besides being a founding member of the Spanish Natural Gas for Mobility Association (GASNAM), created in 2013, it has strategic agreements with Naturgy (with which it has an exclusive 10-year LNG supply contract) and Rolls Royce and Wärtsilä (to build engines). Moreover, the first LNG electricity generator was installed in a passenger ship, the Abel Matutes, last year and an LNG training plan was implemented for ship crew and inspectors in 2015.