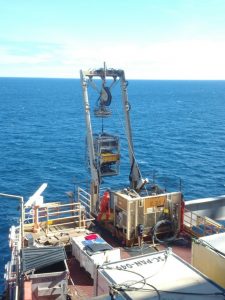 In March this year Fugro began a nine-month inspection campaign of Woodside’s offshore facilities on the Australian North West Shelf. “Very early in the project we identified an alternative to traditional vessel-launched ROV operations which would deliver cost-saving benefits for our client as well as operational improvements,” said Paul Mullins, IRM/Remote Operations Manager. “For a more effective approach to inspection and cleaning tasks we engineered a solution which involved a modified ROV and the design of an innovative launch and recovery system (LARS) enabling the PDROV to be deployed from individual platforms.”

During the development of the new system the project team overcame a number of challenges including limited space and structural capacity on the platforms, platform crane weight and reach limitations, electrical supply and restrictions on welding and drilling.

Fugro’s innovative technique resulted in substantial cost savings as well as significant risk reduction, achieved through reduced requirements for vessels, personnel and equipment. The new system delivers additional benefits including access to previously inaccessible areas of oil platform jackets and an improved operating window due to the absence of heave and drift-on restrictions associated with vessel-based ROVs.

Work on the Woodside IRM project is planned to continue until December 2018.

A major milestone you can’t miss