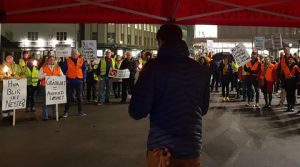 The Norwegian Government has ruled against the reflagging of Color Line vessels under the Norwegian International Ship Register (NIS) flag. This is a significant and hard fought victory for Norwegian seafarers and the ongoing ITF cabotage campaign.

ITF affiliate, the Norwegian Seafarers Union (NSU), won the fight to keep the vessels under the Norwegian Ordinary Ship Register (NOR), securing the jobs and maintaining the wages and conditions of 700 Norwegian seafarers.

Johnny Hansen, NSU president, told the ITF: “This is a victory for these brave seafarers, which has only been possible because of the solidarity from the labour movement and the ITF family. Pressure from the international trade union movement has yielded results.

“We’d like to thank the Color Line employees and their families, their shop steward Ronny Øksnes, Ap, SV, and Sp og Rødt for fighting alongside every step of the way, as well as the political leaders who have helped secure the victory.

“This is a major win for our country’s seafarers, and the country itself. Enforcing and maintaining cabotage safeguards our strategic interests, provides jobs, brings added economic value while also protecting national security and the environment,” said Mr Hansen.

“We are proud to work with the NSU, Johnny Hansen, Ronny Øksnes and all the hard-working executives at the NSU. The world was watching you fight and win this major cabotage battle,” said Mr Given.

Høglund teams up with Yxney maritime to drive fuel efficiency

The latest news for you on Marshall Islands

US$353 Million Jury Award in Texas