2020: Shipowners have a cause to be awake at night! 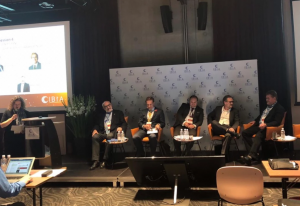 IBIA’s 2018 Annual Convention in Copenhagen will remain for a multiple of reasons in the hearts and minds of all present as well as those reading various reports in the media for ever. It was one of the most timely events over the last 25 years! John Faraclas writes: 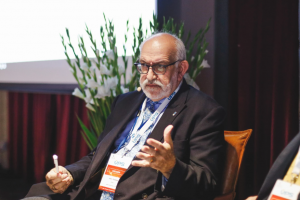 Moreover, the last five years an unprecedented situation is being built up with the environment – an issue which ranks number one in the shipping industry to and for all intents and purposes. Obviously from the days of the late George P. Livanos, 36 years ago when he inspired both shipowners and seafarers in co-signed the joint declaration under which HELMEPA operates and will continue to do so as long as Greek shipping exists and the creation in other countries of CYMEPA, TURMEPA, AUSMEPA, NAMEPA, etc., etc and the IMO’s devotion to the environment and generally speaking all involved Shipping and the prevention of marine and atmospheric pollution – a responsibility of paramount importance, the Environment and Life on Planet Ocean MUST be preserved one way or another, BUT, repeat BUT in an ethical and honest way avoiding hype and petty politics! 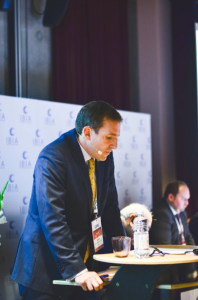 We were more than honoured as shipping industry media and personally myself with the proposition leading to an invitation by IBIA’s (International Bunker Industry Association)  former CEO Justin Murphy and global head for Marketing & Events Sofia Konstantopoulou not only to be media partners but more importantly to moderate the most sensitive and most important panel of the entire convention, that of Shipowners with a very challenging theme: “With one year until 2020, what keeps you awake at night?”

To put you more deep into the scene, there are some pre IBIA-Convention 2018 issues worth mentioning; one of them on the 18 October 2018 – ESPO presented its annual Environmental Report for 2018 at the GreenPort Congress in Valencia, where the ESPO Environmental Report included environmental performance benchmark indicators as well as the Top 10 Environmental Priorities of the European ports for 2018. 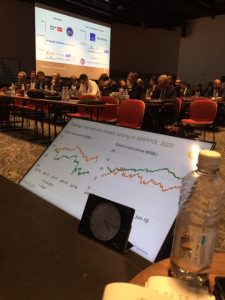 *One of Adrian Pask’s slides; titled: “Trading: markets are already pricing in MARPOL 2020” was well debated…

Immediately afterwards we had the WISTA- 2018 International AGM and Conference 22- 26 October in Tromso, Norway – above the Arctic Circle where the main theme was “Breaking the Ice – developing dialogues for sustainable business in the Arctic”. Most sessions were dealing with the environment, 2020, emissions etc etc and never forget that all northern countries, Scandinavians in principal and in particular being more than staunch supporters and sensitive for the Environment.

Now add the importance of predictive analytics where foreseeing and preventing events that lead to injury, loss of life or environmental damage is the key part of this issue and see the build up from our side towards tackling the session as Shipowners are not running a charity and as proven none from the others sessions’ panels had envisaged commercial issues affecting vessels commercial operations as well as many other issues. 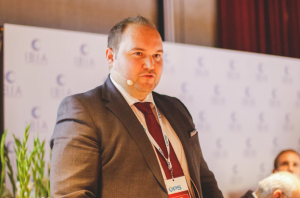 Wonder who wishes and for what reason to “deconstruct” the shipowners business under the pretext of the environment, as, what happens proves that all want to see the 2020 in order – meeting the deadline, without asking those who might have to pay an arm and a leg for an uncertain thing such as the scrubbers and other issues around the way some wish to see without paying attention to the shipowners, particularly the small to medium sized ones, or others more robust size-wise but with financial hiccups… Add the fact that for the middle man in the street to understand the situ indeed knows that vessels don’t just mark their paths in and on water; their routes can be traced by contrails in the clouds too but this doesn’t mean that the entire process for the 2020 is in all respects correct, eh!

The very eloquent and well know shipping personality, Unni Einemo, IBIA’s director and IMO representative and above all an esteem journalist for many years gave me an eclectic introduction – thank you Unni for this. 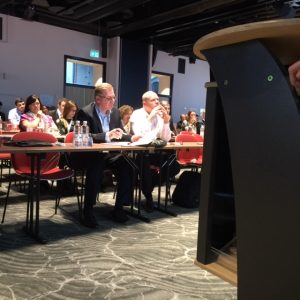 We must also mention that this panel’s session was in the middle of the entire convention programme and the last of Day One, and already some issues had been deliberated: IMO 2020 update, compliance and enforcement; Fuel challenges; Future proof fuels; Market review with freight markets, bunker prices and Sale & Purchase; BIMCO / terms and conditions so it was a good warm up of what took place in our session.
My panel consisted of four experts in the international shipping arena: I had to explain to the audience as well as to the panel that I totally disagree with the majority of issues around 2020 and if as said shipowners cared about the environment they should have stopped carrying oil in their tankers; not a provocative view but an orthologistic view which I had to enhance by saying, as a question to all “What will happen ladies and gentlemen if we opt for the alternative sources of energy?” Silence from both the panel AND the audience but thank Posidon, a middle aged lady nodded what’s on/ what’s up then, what’s the answer – you could read in her expression the question needed to be replied so I said: “One thing will happen: big money will change hands”. 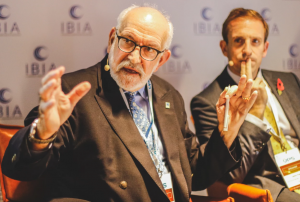 Making a point to the audience

Given that I emanate from both a shipping and seafaring families and having gone through every aspect of the shipping adventure I could see the audience eager to listen to the panellists speeches and, as I expected, to my questions, contrary to the norm until that moment were all questions were electronically aired by the audience on the eventora live screen – login on brings the question most matching the audiences preference to the top of the screen! I had to add also that to warm up the audience and the panellists I had to be clear and honest that a War is needed, no matter how cynically to read this, it is the harsh reality, given also the state of the freight markets both for listed and non-listed shipping entities. “War Father of all; if you don’t destroy you cannot rebuild – this is the pitiful message from history”. I could see some moving reactions / a body talk so to speak from the audience and uneasiness, but when carrying on saying: “What is the product of the Second World War?” replying immy same as again the audience was a bit lost: “The long period time charters of the 50’s, 60’s and 70’s to rebuild the wold”! Talking on the panel on question time; here with Andrian Pask

First speaker was Adrian Pask   with more than excellent slides tying to defend his company’s position.

I had to go, as said above, contrary to the practise of having the audience ask questions and I aired on the eventora screen the following questions, being the result of an intense survey involving nearly a hundred or so individuals, shipowning companies – family ones too, and organisations as well as a couple of my own. In our survey those questions send and being minimum from five individuals and companies as well as some special ones were given to the audience with thanks to IBIA for downloading same. We now leave it to your judgement and await to your written comments. After the event we had our dinner, an exceptional one at the Grøften  Restaurant in Tivoli Gardens sponsored by Bunker One and GMA Petroleum Holding, were for me it wasn’t the norm networking and fun but also to answer some questions from the speakers and the audience on our panel.

We hope to have contributed to this event not just to our panels’ theme but defending the shipowner who is not running a charity and this was a must! I take this opportunity to thank all in my family, friends, supporters of www.allaboutshipping.co.uk for coming forward and assisting us with questions in this difficult task and basically spelling it out! As Day two amongst others included a full session on Scrubbers – and a lot was debated at the workshop on the 6th of November before the Convention, we are sure our interference helped a lot. Above all many thanks to Panos Zachariadis and HESGB president Dimitris N. Monioudis! N.B.: As we faced some technical issues with the internet in the hotel, a latent defect as we understand, our reporting on the other sessions from Days 1 and 2 will be soon reconstructed as same were lost …in perpetuity- but luck is with our side given that we have the notes and we will reconstruct same.

P.S. All pictures by Theo Kapetanakis and Karan Kapoor. Those with a star by John Faraclas

Thanks John for sharing this event with us. I had planned to attend and couldn’t so now i have a good picture of it from all your wrote. There is a misperception of the players roles and intents and it is an obstacle to making the right decisions. The thing is that IMO and all who make regulations should take the time to look at shipping holistically. Some will make money off these scrubbers who are not full proof and maybe indeed fool proof though, because it will be a great source of income for some and a great depletion of income for others who will have to comply or decline. the end user is once again going to pay the price. lets vision it will work out for the best, as usually it does. maybe?