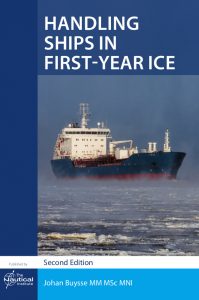 29.11.18 – The Nautical Institute has launched the second edition of its practical guide to shiphandling in ‘new ice’ conditions in the Baltic, North Atlantic and St Lawrence Seaway.

Handling ships in first-year ice demands specialist knowledge and skills. Ice remains a major obstacle for commercial traffic and has the potential to damage propellers, main engines, rudders and hull plating. It limits the speed and manoeuvrability of vessels, putting them at greater risk of collision with structures and other vessels.

This second edition is in a more accessible format, with enhanced diagrams illustrating shiphandling techniques. The text has been updated to take into account the Polar Code, heavier shipping traffic in ice-affected waters and ports, improved communications and new methods of detecting ice. More explanation has been included about the phenomenon of icing and its effect on ship stability.

The author, Captain Johan Buysse MM MSc MNI, uses his wide experience of operating ice class vessels in the North Atlantic and the Baltic to equip the reader with a good understanding of the risks that ice can pose and practical ways to mitigate them. Capt Buysse admits that he was on a steep learning curve when he started out:

At one moment in my career, at the beginning of winter, an owner transferred me from a 4,000dwt class 1A, 13kt vessel to a 21,000gt, 1A Super class, 19kt ro-ro ship. All of a sudden, all hell broke loose. From chugging along in leisurely fashion on an old lady, a few days later I had to handle what seemed like an untamed beast!

The book progresses logically from voyage preparation, through navigating in ice at sea, in fairways and under pilotage, to berthing and mooring. Separate sections cover icebreaker assistance, notch-towing and a comprehensive glossary of ice terminology.

Handling Ships in Ice has been a mainstay on board ships operating in ice-covered Baltic waters. This new edition takes into account changes in ship construction technology, new methods of depicting ice conditions, new regulations and evolved practices.