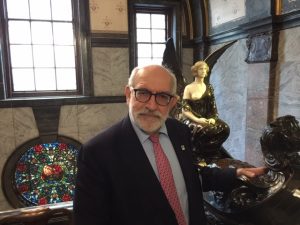 The BDI (Baltic Dry Index) lost 49 points earlier on today “thanks” to the Capes, the culprits of the Dry Market. Geopolitics couldn’t be more perplexed; John Faraclas’ daily recap:

Another triple-digit loss for the Capes with the BCI down at 1,950 points – down 171 point losing also the 2,000 point-threshold!

All in all a downward Dry Market and caution should be exercised.

The Wets on the rise; the last published BDTI (Dirties)  and BCTI (Cleans) stood at 1,133 points – up two and 750 – plus 55 points respectively; a very good rebound by the Cleans!

The WTI ended up at US$ 51.45 amid worrying producers… It must though stay down as otherwise the revolt will be messy; the public CANNOT afford high prices..

Geopolitically amongst other issues we can foresee a messy end of G20 with the USA imposing more Tariffs on China…We can also see a deterioration of the Russian – Ukraine saga which will produce surprises; Russia cannot be bend by sanctions. Putin keeps his agenda and nothing can stop him in his courtyard. You witnessed the inability of NATO to send ships in the Black Sea and Frau Merkel turning a blind eye… Shame… Knowing the region well from my ancestors who had 376 history there in this particular geographical place – the Sea of Azov, one thing is certain: Russia will not back-off! President Trump cancelling the meeting with president Putin was a wise thing to do, but how this in the long term helps the Ukrainians?

The MIGRANTS, The Wars in the Middle East and in general all the issues we cover remain the same – add that they turn a bit sour every day… The East Med with the Oil and Gas off Cyprus might also ignite other issues but whoever bothers the ExxonMobil drill ship will face the wrath of Pax Americana!

The Balkans will erupt one way or another and all “stakeholders” will get involved… AND never forget Greece and Turkey 565 years – at least,  being at loggerheads…

BREXIT remains the issue which will bring to the surface too many other “local” and international issues of the wrong Conservative Party and, whatever happens, some members will be totally responsible for the fall of Mrs May and the mess which will follow. Add the whispers for the BoE governor and his points of what might happen… there also voices condemning him and BoE… Time will tell and we eagerly await for this saga too…

Italy won’t comply with the Brussels’ Holy Inquisition so to speak… The Italians, and rightly so, will “manipulate” the situation for their people’s benefit; end of the story…

At the other side of the Atlantic Michael Coen, former lawyer of president Trump makes it messy… This is the second time… He admitted that he lied… you know the story…

Enough on Geopolitics? No, of course not as we have Australia, Africa, South and Latin America with too many issues… Will revert in our weekly report… but ensure you follow up the financial / economic events as you never ever know what is in the cards…

Look at our events news and ensure you don’t miss the annual Salvage & Wreck one on 5-7 December by informa at the Hilton in Tower Bridge; All About Shipping viewers have a 20 (twenty) percent off! Log in the site the respective banner. 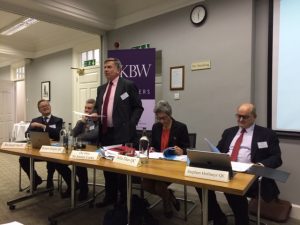 On another tone and note we had the very interesting LSLC – London Shipping Law Centre Forum in conjunction with 7KBW  today at the most relevant place in the Square Mile, the Baltic Exchange on “Current issues in the law of charterparties”  at a full house in the Victoria Room with every single seat being …sold since last Tuesday!

Chaired by the Hon. Sir Jeremy Cooke speakers included: Stephen Hofmeyer QC, Julia Dias QC, Robert Bright QC and Richard Sarll. All speakers are co-authors of “Caver on Charterparties”, the first edition being published in 2017 and examined a number of themes which have emerged from recent decisions relating to charterparties  and shared thoughts arising from research when preparing their text book. Part A was on the Ocean Victory on the Supreme Court’s Safe Port? A big question… One of the nicest silks at the Bar, Stephen Hofmeyer QC delivery was excellent. Then the formidable Julia Dias QC, who was appointed as a Deputy High Court Judge earlier this year, tackled some recent issues on the Inter-Club NYPE Agreement.

She was followed by the very eloquent Robert Bright QC with the Patel v Mizra case and the Letters of  Indemnity. Final speaker was Richard Sarll with “Reflections on the frustration of charterparties”. We hope to revert soon with a write up. 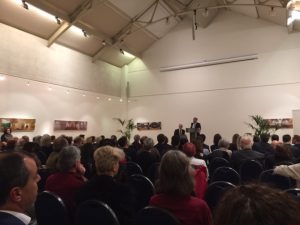 Two more events took place tonight; the first one was the much awaited Andreas A. David Nineth Biennial Memorial Lecture. Andreas David, who past-away 18 years ago only at 66, was one of Planet Ocean’s most distinguished gentlemen, a successful businessman, a beloved husband and father and a great benefactor for many causes; a founder member of the Hellenic Centre too!

At a full house in Hellenic Centre’s Main Hall; and what a theme: “Migration and Media – Challenging Democracy and National Cohesion in Our Times”.  Professor Edward Schumacher-Matos director at the Edward R. Murrow Centre for a Digital World, Edward R. Murrow professor at the Fletcher School of Law and Diplomacy at Tufts University and a world acclaimed journalist, successfully delivered a pandemic issue of our declining society! Four questions including a statement – including also our point of reference that he must see the harsh reality in the film AMERIKA SQUARE, a triumph at last Monday’s BAFTA Awards in Piccadilly Circus – the film by the way was first screened at the Hellenic Centre! 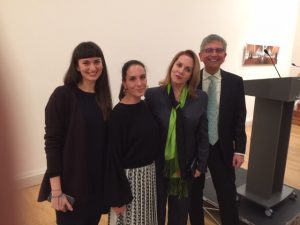 Good to see so many people some of them timewise more relevant than you can imagine: Margarita Mavromichalis, a world acclaimed photographer  the Greek Ambassador’s wife who just, a fortnight ago, presented the World the mess on Lesvos Island with her unique photographic exhibition – still on Friends Room “Between Hope and Despair” on the Migrants there; Professor Gonda Van Steen, new Koraes Professor at King’s College London who delivered last Tuesday a speech on “Adoption, Memory, and Cold War Greece: Kid pro quo?” at the Friends Room …surrounded by Margarita Mavromichalis’ pictures from Lesvos! Interesting discussions with both and other guests there. Excellent!

The other event a bit south was the The 2018 RINA (Royal Institution of Naval Architects) President’s Invitation Lecture sponsored by ABS at One Whitehall Place, at the prestigious Liberal Club. This year’s speech was presented by Paul Flaherty, Director, Fleet & Technical Operations, Navigator Gas  who described the technical and commercial challenges in the design, commissioning and operation of the “Navigator Aurora”, the world’s first ethane fuel conversion.

Just before the dinner

Our man from Habana was there and we thank him for the pictures. Good to hear that there were, amongst others, many members from the HESGB – Hellenic Engineers Society of Great Britain as well as representatives from almost most of the Square Mile’s shipping stakeholders – the main group being technical experts!

That’s all for tonight, have a nice evening and remain on guard from actions emanating by Pirates, Terrorists and Criminals wherever you are on Planet Ocean; add second class politicians…and their cronies!