win awards in front of over 1,000 at annual shipping gala

Intercargo chairman John Platsidakis was named Greek Shipping Personality of the Year for 2018 and Simos Palios was honoured with a Lifetime Achievement Award in Athens on Friday, December 7 at the 15th annual Lloyd’s List Greek Shipping Awards. Angeliki Frangou and Paris Kassidokostas-Latsis were among other major names who won awards.

A large attendance of more than 1,100 Greek and international shipping personalities gathered at the Athenaeum InterContinental Hotel for the 2018 event, organised by Lloyd’s List, the international maritime newspaper established in 1734.

They hailed the brightest performers for 2018, including some of the industry’s best-known personalities and companies, and enjoyed an exciting event programme that reflected the shipping industry’s current need to prepare for a new era of lower greenhouse gas emissions and new fuels.

ClassNK, a longtime supporter of the event, was once again overall lead sponsor of the Greek Shipping Awards.

Greece’s alternate minister of Shipping and Island Policy, Nektarios Santorinios, opened the ceremonies and presented a donation on behalf of the event organisers to ‘Argo’, the charity supporting children with special needs in the families of Greek seafarers.

John Platsidakis was voted 2018 Greek Shipping Personality of the Year. Mr Platsidakis is stepping down as chairman of Intercargo after six years.

The Award reflects his leadership of Intercargo, massively increasing the association’s international membership and strengthening its voice, as well as his many other roles contributing to shipping and his work as a leading executive of the Angelicoussis Shipping Group.

Lloyd’s List’s Greek Shipping Newsmaker of the Year Award went to Angeliki Frangou, who has dynamically built the Navios Group into a multi-billion dollar enterprise of more than 200 ships, as well as ports and logistics operations in South America.

Just in the last 12-18 months, achievements include the launch of new containership company Navios Containers with a listing on the Norwegian OTC market and soon a listing in the US, the merger of Navios’ two tanker companies, and 24 bulker purchases for the group. The Award is decided by the editorial staff of Lloyd’s List.

Today he is best known to the international maritime world as the founder, chairman and chief executive of New York-listed Diana Shipping, which owns 50 large bulk carriers.

Paris Kassidokostas-Latsis won the New Generation Shipping Award, open to personalities of no more than 40 years of age.

The grandson of the legendary John Latsis, he is dynamically continuing the family tradition in shipping.

In the last two years, Mr Kassidokostas-Latsis has diversified the family’s footprint in shipping, most recently by leading the group into LNG shipping for the first time.

Christopher J. Wiernicki was elected International Personality of the Year, the only Award open exclusively to non-Greeks.

Chris Wiernicki is chairman, president and CEO of ABS and a previous chairman of the International Association of Classification Societies.

ABS has been a great partner of Greek shipping since the Liberty ships of the Second World War and Mr Wiernicki’s respect for the Greek shipping community and his personal interest in Greece are well known.

The recipient of the Dry Cargo Company of the Year Award for 2018 was Contships Management Inc, a unique niche project in Greek shipping. Launched in 2015, this year it has already reached a fleet of 31 feeder container vessels, putting it into the Top 10 feeder operators worldwide.

Contships works with all major charterers and has established its “brand” in a sector where reliability and service are essential for success.

Steadily its fleet has grown into the world’s largest independent tanker company and Greece can be proud of the fact that management of the Euronav tanker fleet is done from Athens.

The judges chose Seajets as Passenger Line of the Year.

Seajets was launched as a passenger line in 2002 and has become one of the world’s largest operators of high-speed ferries with a fleet of 14 high-speed vessels plus three conventional car-passenger ferries.

Savvas Athanasiadis of Clarksons Platou Hellas accepting the Shipbroker of the Year Award from Harry Hajimichael of sponsor The Tsakos Group.

Clarksons Platou Hellas won the Shipbroker of the Year Award. Since establishment in 2004, Clarkson Platou Hellas has expanded and now has an all-Greek staff of nearly 50 people. T

his year the chartering team reached 1,000 fixtures and since 2017 the firm has concluded about 50 second-hand acquisitions for Greek and international clients, including a large dry bulk vessels purchased on TaoBao, the Chinese equivalent of e-bay. Clarksons Platou Hellas is celebrating its 15th anniversary year! 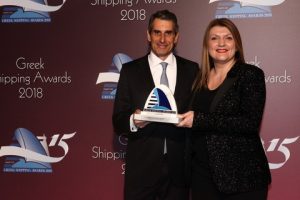 Despina Panayiotou-Theodosiou of sponsor Tototheo Maritime presenting the Shipping Financier of the Year Award to Yiannis Karamanolis of BNP Paribas.

The Shipping Financier of the Year Award went to BNP Paribas.

One of very few banks that has continued lending to Greek shipowners during recent tough times, BNP Paribas is now one of the three largest lenders to the industry with a portfolio of about $3bn.

The judging panel also noted that the bank keeps a traditional long-term supportive mentality towards its shipping clients.

Farad S.A. was awarded the Technical Achievement Award. The winner, Farad S.A., is based in Piraeus and has been designing and manufacturing marine heat exchangers since 1979.

The panel chose Farad partly for its marine gas oil (MGO) cooling unit that enables today’s ship’s engines to reliably run on ultra-low sulphur fuel by decreasing the viscosity and increasing lubricity of the new fuel.

The Propeller Club, Port of Piraeus was recipient of this year’s prestigious Piraeus International Centre Award.

The United States Propeller Club, International Port of Piraeus, is one of the oldest and most active Propeller Clubs around the world and has become increasingly vibrant in recent years.

The judges recognised the major contribution that the club and its events make to the business and social life of the shipping community.

Alistair Marsh of sponsor Lloyd’s Register presenting the Award for Achievement in Safety or Environmental Protection to Dr. George A. Gratsos.

Dr. George A. Gratsos won the Award for Safety or Environmental Protection. George Gratsos was awarded for his many years of contributions to both safety and environmental protection.

Today he is president of the Hellenic Marine Environment Protection Association, and he is one of the few to study the environmental impact of ship design over its full life-cycle.

In August this year he was in command of the Anek Lines ferry “Eleftherios Venizelos” with 875 passengers and 140 crew onboard when a serious fire broke out three hours after leaving Piraeus.

Capt Kavros was given the credit for returning to port and disembarking every single passenger and crew member without injury.

The Tsakos Enhanced Education Nautical School was winner of the 2018 Education or Training Award.

Operating under the umbrella of the Maria Tsakos Foundation in Chios, the school – or ‘TEENS’ – is a pioneering project that aims to help preserve Greece’s long maritime tradition and help give the industry the well-educated and properly qualified young people it needs.

Martin Crawford-Brunt of sponsor RightShip presenting the Ship of the Year Award for m/v “Afros” to Marianthe Patrona of Blue Planet Shipping.

The Ship of the Year Award went to the “Afros”, an ultramax bulk carrier delivered earlier this year by Chinese shipbuilder Jiangsu Haitong.

The “Afros”, managed by Blue Planet Shipping, is the first-ever bulk carrier to be fitted with the Flettner Rotor System, based on the Magnus Effect – otherwise known as spinning sail technology. The rotors harness the power of the wind to enhance efficiency and reduce fuel consumption and emissions.

The Award was adjudicated by a team of experts at Lloyd’s List Intelligence.Lloyd’s List Greek Shipping Awards 2018

Jiping Chen of China Classification Society (centre) made the Champagne Toast to the health of the Greek shipping industry.

Achievement in Safety or Environmental Protection

The Propeller Club, Port of Piraeus 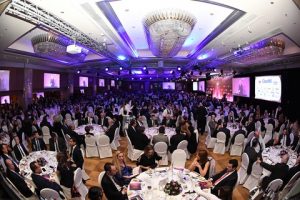 Over 1,000 guests attended the event.

Achievement in Education or Training

Greek Shipping Newsmaker of the Year

NAMEPA Teams Up with Cal Maritime for Emission Forum