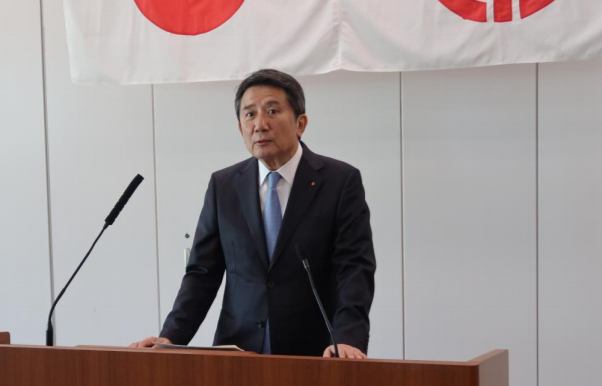 “Coming together, let’s step forward towards a new 100 years”

To everyone throughout the entire “K” Line Group, I extend my very sincerest Happy New Year wishes. As we enter 2019, I would like to take this opportunity to share a few words with you.

During 2018 the world economy continued to show a gradual improvement. Although unstable conditions could be seen in some developing markets, such as the economic slowdown in Central and South America, and currency depreciation in Argentina and Turkey, with the support of the strong United States economy the worldwide economy on a whole remained firm.

On the other hand, the trend towards protectionism, which has arisen in recent years, has grown even stronger, in particular the development of “America First” policies by the United States has had a major destabilizing effect around the world. On the trading front, the United States renegotiated the North American Free Trade Agreement (NAFTA), saying it was unfair, and brought about trade friction by imposing extra customs duties on imports from China. Such actions have greatly upset the global economy, and there is great concern regarding the effect they will have on trade, which is the very foundation of our business.

This year the world economy is expected to continue to show gradual growth similar to last year, but trade friction between the United States and China, and growing instability in the Middle East due to increasing international tensions with regard to Iran and Saudi Arabia, as well as the problem of the United Kingdom’s exit from the EU, have led to increased uncertainty. While keeping a vigilant watch on these situations we will need to consider the likely effects on our operations, and promptly take whatever countermeasures are needed.

With the world economy remaining steady, demand for marine transport has gradually increased, while on the other hand historically stagnant market conditions in dry bulk and container shipping have reduced tonnage supply pressure, so the supply and demand situation in international shipping is showing a steady improvement.

In our results for the first half of this fiscal year, with market conditions for the dry bulk segment remaining steady, together with the structural reform we have been implementing, we were able to show a profit. In the energy segment, in accordance with the course laid out in the medium-term management plan, we were able to build up steady gains from medium and long-term contracts. On the other hand, in the product distribution segment, logistics  operations together with coastal and inshore operations produced steady earnings, but for the container shipping company “Ocean Network Express” (ONE), while the synergic effect due to the integration of operations became steadily apparent, some confusion regarding the providing of services at the start of business operations led to load volumes being less than was expected, resulting in a loss. Added to this, car carrier operations also showed a loss, due to factors such as lower efficiency in shipping routes from Europe, and a reduction in cargos to resource-rich countries and developing markets. As a result, the company as a whole is expected to fall into the red for the entire fiscal year.

There is no change in our policy of steadily pressing ahead with each of the issues specified as being of importance in the three-year medium-term management plan: “rebuilding our portfolio strategy,” “pursuing advanced management and strategy” and “enhancing ESG (Environment, Social and Governance) initiatives.”

Taking into account the difficult business conditions that prevailed during the first period of this fiscal year, during the second period we are concentrating on tackling as urgently important issues “the recovery of ONE’s earning structure,” “improvement in the profitability of car carrier operations” and “efforts aimed at selection and concentration.” ONE is making earnest efforts to recover the trust of its customers, and by carrying out structural reforms, such as overcoming temporarily worsening factors like load reductions, and reviewing its freight portfolio, is working to rebuild a corporate structure which can be relied upon to deliver earnings. Also, in our “efforts aimed at selection and concentration,” in order to thoroughly concentrate our business resources on the four pillars of dry bulk, car carrier, energy and logistics and related operations, we are advancing efforts to change our business choices and assets while looking towards the future shape of our group after spinning off our containership business.

I believe that by taking action with a sense of urgency to cope with these pressingly important issues, and reliably delivering results, our earning power will steadily recover from the next period onwards.

Then, in order for this to lead to a heightening of our company’s competitiveness and growth, we have to further strengthen our relationship with our customers, who represent our greatest asset. To this end, instead of seeking to increase the scale of dry bulk, automobile shipping, energy and logistics and related operations, which form our company’s business, it is our policy to advance a reform towards a business which creates a new kind of value, unique to us, which anticipates changes in our clientele, by means such as the construction of a business model adapted to changes in society, and adapting to digital technologies such as artificial intelligence and the internet of things. In order to grapple organically with these issues, this month a new organization will be set up. For digital technology activities there is the AI-digitalization advancement section, while for lateral group strategies and dealing with customers, there is the marketing strategy section. Working in coordination these sections will cooperate with departments both inside and outside the group and the company, forming a structure which provides new added value to our customers. By strengthening our relationship with our clientele through the provision of our own unique added value, we will solidify the long-term foundation of reliable earnings which is the aim of the mid-term management plan, leading to stable business operations. It goes without saying that the provision of high-quality service through safe shipping operation is the foundation of our company, and we want to make continuous efforts to ensure this objective is given every possible support.

This year marks the 100th Anniversary of the founding of our company. Looking back on the company’s history, there has been no small number of ships and services which brought about great change, adding value uniquely provided by our company, as a result of listening to our customers. Examples of this include the “Toyota Maru No. 10,” Japan’s first automobile transport ship, built in response to the increase in automobile exports from Japan, and the wide-beam/shallow draft coal carrier “Corona Series” which is a type of vessel well suited for use by Japanese electric power companies which we developed.

Taking this opportunity of our 100th Anniversary, I would like us to aim to be a corporate group that continuously provides unique value, taking a fresh look at our group’s DNA, and adding the new viewpoint such as group-wide marketing efforts and technologies including artificial intelligence and the internet of things.

Although recent results have been poor, it is clear what needs to be done. All of the executives and employees of our group must diligently work together in order to cope with the issues that need to be addressed, and step forward firmly towards the next 100 years.

In closing, as we celebrate the New Year, I wish all of you, the members of the entire “K” Line Group and your families, Good Health and Prosperity and pray that all of our ships will enjoy safe passage throughout 2019.