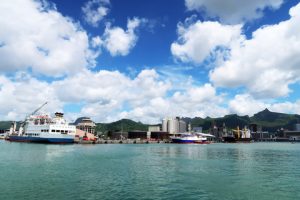 It is the latest extension of HullWiper’s leasing programme, introduced in 2017 to work with partners around the world to offer ship owners and operators a cost-efficient, brush- and diver-free alternative to traditional hull cleaning methods that protects anti-fouling coating on vessel hulls and the oceans. Ship owners and operators benefit from a clean hull that improves vessel performance, fuel savings and lower CO2 emissions, without any extra downtime or harming the marine ecosystem.

Protected from the open sea by the world’s third-largest coral reef, which surrounds the island, Mauritius is one of 12 countries spearheading the International Marine Organisation (IMO) GloFouling project, a collaboration between the Global Environment Facility (GEF), the United Nations Development Programme (UNDP) and IMO.

“As home to some of the world’s rarest plants and animals, Mauritius recognises the need to implement measures to stop the growing threat of foreign aquatic species,” says Simon Doran, HullWiper’s Managing Director. “In line with the Mauritius Port Authority’s commitment to sustainable and eco-friendly port activities, it was an obvious choice for our first operational base in East Africa.”

HullWiper’s patented Remotely Operated Vehicle (ROV) system uses adjustable seawater jets under variable pressure to remove fouling, instead of brushes or abrasives, minimising the risk of damage to expensive anti-fouling coatings. No divers are used, so there is no risk to human life and cleaning can be conducted day or night, in most weather conditions, and whilst cargo operations are underway. Removed residues are collected by an onboard filter and deposited into dedicated drums onshore for locally-approved environmental disposal. The filter also reduces the risk of cross-pollination of waters with alien species.

Immersub’s CEO Capt. Pierre Yves Rochecouste says HullWiper’s ROV technology enhances Immersub’s experience in traditional hull cleaning methods, adding: “For the past three years, Immersub has been searching for new hull cleaning technologies around the globe that would comply with our two main goals: efficiency and being environmentally friendly. We consider HullWiper to be the future of underwater hull cleaning that underpins our values and goals to provide a safe, sustainable and efficient service to the shipping industry.

“Thanks to HullWiper’s worldwide reputation and network, we have no doubt that the Port of Mauritius will become a major stopover for underwater hull cleaning services in the Indian Ocean.”

Launched in Dubai in December 2013, HullWiper operates in ports around the world including Sweden, Norway, Denmark, Singapore, Spain, Netherlands, Egypt, Australia, UK, United Arab Emirates and – on an ad hoc basis – at key locations across the Middle East and is available for lease where HullWiper does not have its own base.