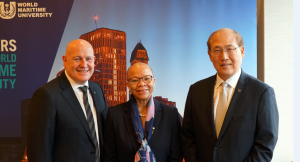 Launch of ITF-WMU report: Transport 2040: Automation, Technology and Employment – the Future of Work

​IMO Secretary-General Kitack Lim has highlighted the need to consider seafarer training and standards as shipping evolves, with increasing levels ITF’s of technology and automation. Speaking at IMO Headquarters (15 January) at the launch of a new report “Transport 2040: Automation, Technology and Employment – the Future of Work”, Secretary-General Lim set out key questions that will require focus from all stakeholders:  “How will the seafarer of the future manage the challenges related to an increasing level of technology and automation in maritime transport? How will the new technologies impact on the nature of jobs in the industry? What standards will seafarers be required to meet with respect to education, training and certification to qualify them for the jobs of the future?”

An important strategic direction for IMO is the integration of new and advancing technologies into the regulatory framework – balancing the benefits  derived from new and advancing technologies against safety and security concerns, the impact on the environment and on international trade facilitation, the potential costs to the industry and  their impact on personnel, both on board and ashore. “Member States and the industry need to anticipate the impact these changes may have and how they will be addressed,” Mr. Lim said.

The International Transport Workers’ Federation (ITF) and the World Maritime University (WMU) Transport 2040 report is the first-ever, independent and comprehensive assessment of how automation will affect the future of work in the transport industry, focusing on technological changes and automation in road, air, rail and maritime transport. The report concludes that the introduction of automation in global transport will be “evolutionary, rather than revolutionary,” and that “despite high levels of automation, qualified human resources with the right skill sets will still be needed in the foreseeable future”. Technological advances are inevitable, but will be gradual and vary by region. Workers will be affected in different ways based on their skill levels and the varying degrees of preparedness of different countries. Read more and download the report here.

Mr. Lim welcomed the report, noting that it would contribute to the efforts of the global shipping community to help implement of the UN Sustainable Development Goals, including the goals on quality education; gender equality; decent work and economic growth; and industry, innovation and infrastructure.