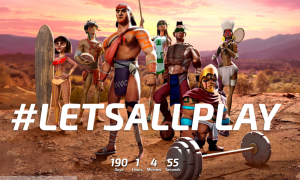 At the 11th hour, the 49er class has been added to the Pan Am Games lineup along with additional quota places for the athletes expected to race. It joins the 49erFX and Nacra 17, along with 8 other disciplines in the PAG lineup.

In December, a group of PASAF officials, World Sailing board members, class leadership and Pan Ams officials began collaborating on adding the class to the upcoming games in Peru.

After only a month of negotiations, the 49er is now fully added to the games lineup, and best of all it will not crowd out the other sailing events as additional athlete quota places have been added as well. The critical piece was linking Olympic Qualifying to the inclusion of the 49er into the  PAG… read on

Gimson and Burnet on a Roll

John Gimson and Anna Burnet (GBR) dominate the 2019 Mid Winters to take their second win of the winter season. Over the eight race series their worst finish was a third place, and they also won four of the eight races.

While the regatta was a fairly casual regatta and only a warm up to the World Cup next week, the fleet was large at 21 boats and included elite contenders from five continents. The British duo have steadily moved up the leaderboard since foiling was adopted and seem poised to remain in the medal conversation through Rio. 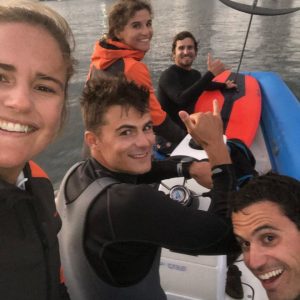 Winners Celebrate with a Bit of Wake Foiling

Martine Grael and Kahena Kunze (BRA) sailed a 3, 7, 3 in light and tricky conditions of the final day of the mid winters regatta to claim the win in the 49erFX.

On the 49er side, it was never in doubt with Diego Botin and Iago Marra (ESP) dominating from the first day to win comfortably

Thanks to Our Supporters