The hypocrisy of better beaches: winners of the “Public Eye Investigation Award” shed light on shipbreaking in Alang 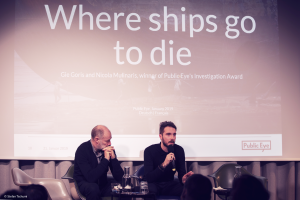 Gie Goris looked for signs of Swiss shipping companies in the Indian town of Alang, where ships go to die. There, he saw many middle-aged wrecks, and met angry trade unionists and workers deprived of their rights and risking their health on a daily basis for a meagre wage. Swiss ship owners, including container giant MSC, use the Alang beach to dispose of their floating toxic waste while boosting their profits. The “recycling” methods of the Geneva-based company MSC, which recently attracted critical headlines for the damage its containers caused in the North Sea, show the vast rift between sustainability promises and the reality of the Swiss shipping industry’s business practices.

Nicola Mulinaris supported Goris in shedding light on the political context behind the illegal trade of toxic waste and in showing the important, but ignominious, role played by landlocked Switzerland in dealing with end-of-life ships.

This story, which was published yesterday also by Public Eye, is just an extract of a bigger investigation. The full report “Behind the Hypocrisy of Better Beaches” takes a closer look at industry attempts to greenwash beaching and the lobbying for double standards by embedded policymakers in Europe.

“With this investigation we expose how vested interests have become greenwashing champions to derail and delay real progress”, says Nicola Mulinaris.

Set up to celebrate Public Eye’s 50th anniversary in 2018, the “Investigation Award” honoured and funded journalistic research into human rights violations, environmental offences or other irresponsible practices of Swiss companies in developing or emerging countries. A jury comprised of renowned media professionals and Public Eye staff selected two projects [1] from a shortlist of 55.

Yesterday, the two investigations were presented to the public in Zurich, during an event held at Kosmos. A panel debate on the relationship between media and NGOs followed the authors’ presentations.

[1] “The Blazing Success of Swiss Cigarettes in Africa” is the other project that won the “Public Eye Investigation Award”. Lausanne-based reporter Marie Maurisse examined the secret recipes that Swiss tobacco companies use for cigarettes earmarked for export to Africa, in particular to Morocco. In 2017 alone, 2,900 tonnes – or 3,625 cigarettes – were exported to the country. Tests undertaken exclusively for her research revealed a scandalous double standard: cigarettes produced by Philip Morris and Japan Tobacco International (JTI) in Switzerland and sold in Morocco contained markedly higher levels of particles, nicotine and carbon monoxide than those produced for the domestic market. In contrast to the laws in the EU, Swiss legislation allows tobacco companies registered in the country – clearly not by coincidence – to produce and export products that are significantly more harmful and addictive than those sold in Switzerland. According to the WHO, the number of smoking-related deaths in Africa will double by 2030 (with help from Switzerland).