The cost of fleet construction 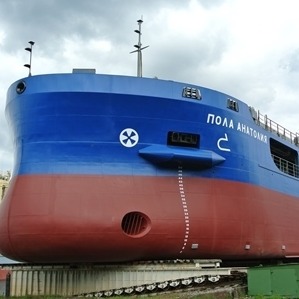 The cost of fleet construction

In 2018, allocations for state measures supporting construction of new fleet in Russia exceeded RUB 2 billion, which allowed private customers have more than a hundred of different vessels built by domestic shipyards. Many ships were laid down under state orders.

This measure supports the construction of 110 vessels including tankers of RST25, RST27 and 19614 designs, dry cargo carriers of RSD44 design, barges and tugboats.

Besides, RUB 5.9 billion was provided to State Transport Leasing Company for leasing of cargo and passenger ships.  It had been earlier planned to use those resources in the projects of Goznak Leasing (a company of USC from 2016).  STLC, in its turn, is going to additionally attract more than RUB 5 billion in the market for implementation of construction projects at Russian shipyards and for leasing out of 11 dry cargo carriers and high-speed passenger ships (Kometas).

According to Gennady Yegorov, Director General of Marine Engineering Bureau, the demand for sea/river dry cargo carries will be as high as 100-140 units by 2022, when decommissioning of old ships will reach its peak.

According to the expert, boosting of Russia’s grain exports can be among the key drivers of river fleet development while renovation of the fleet intended for Siberian rivers is only possible through the state budget or through multiple increase of rates for its services due to its seasonal deployment.

Among the projects implemented or launched in 2018 there are several large series.

Another shipyard, Krasnoye Sormovo, completed the series of five dry cargo carriers of Project RSD59 for the same company, Pola Rise, on 15 October 2018. Those vessels were laid down in autumn 2017. To date, four RSD59 vessels – Pola Makaria, Pola Sofia, Pola Filofeya and Pola Feodosia are being operated on inland waterways.

In November 2018, Krasnoye Sormovo signed  yet another trilateral contract with State Transport Leasing Company and shipping company Pola Rise on construction of the second series of four dry cargo carriers of Project RSD59. All the four ships are to be built and delivered to the customer in 2019. The first ship is to be launched in January 2019 with the delivery expected by the beginning of the next navigation season.

Besides, the past year saw the construction of seven non-self-propelled shallow-draft double-hulled oil barges of Project ROB20. Okskaya Sudoverf shipyard (a company of UCL Holding) delivered the seventh oil barge named Belmax 7 on 29 August 2018. A series of 10 barges is to be built for Saint-Petersburg based shipping company Belmax under the leasing contract signed on 31 October 2017 with State Transport Leasing Company as a customer.

Moreover, Okskaya Sudoverf shipyard laid down the fourth dry cargo carrier of Project RSD32M in a series of eight ships ordered by STLC. 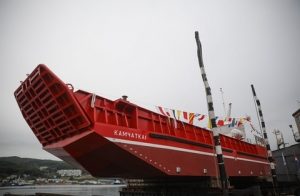 While on this subject it should be noted that two self-propelled barges, Kamchatka-1 and Kamchatka-2, were built in the Primorsky Territory. The barges able to carry 25 passengers and 40 tonnes of cargo will be deployed for a ferry service and unloading to unimproved shore.

On 31 October 2018, Nakhodka Ship Repair Yard PJSC held a ceremonial keel-laying of two self-propelled freight/passenger barges ordered by the Kamchatka Ministry of Transport. According to NSRY, the vessels able to carry 20 tonnes of cargo and 12 passengers each are to be launched in 2019.  Their operation experience will let take a decision on the project expansion. This line of self-propelled barges can be upgraded taking into consideration climate conditions in Kamchatka.

Astrakhan Region based shipyard “Lotos” (a company of USC) signed a contract to build two non-self-propelled barges of Project 7514 for Sea Rescue Service under the order of Goznak-Leasing. The vessels will be built as part of the programme of USC for leasing of sea and river ships. The delivery is scheduled for spring 2019. Non-self-propelled flat-top barges of mixed sea/river class intended for transportation of general cargo will be built under the supervision of Russian Maritime Register of Shipping.

On 4 September 2018, Astrakhan Shipbuilding Production Association (ASPO, part of Caspian Energy Group) held a keel-laying ceremony for two chemical carriers of Project 00216М. The tankers will be built under the contract signed by Caspian Energy Group (United Shipbuilding Corporation), OOO Volgotrans and ZAO Goznak-Leasing. The first tanker is to be launched by ASPO in 2019, the second one – in 2020. Shipping company Volgotrans (Samara, member of Russian Chamber of Shipping) earlier signed an agreement with United Shipbuilding Corporation (USC) for construction of more than 30 sea/river tankers of 6,000-7,500 DWT within three years.

A bunkering tanker of Project RT37 laid down at East-Siberia River Shipping Company in April 2018 and intended for the Baikal lake is to be delivered 2019. 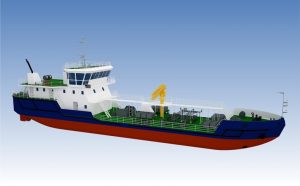 On 21 September 2018, Yaroslavsky Shipyard laid down an oil recovery vessel of Project Р2114 for Transneft Kama Region. The ship of more than 20 meters long and 6 meters wide is intended for oil spill response operations including those on inland water ways. The agreement was signed in February with the delivery scheduled for September 2019.

On 27 November 2018, Khabarovsk Shipyard (a company of the United Shipbuilding Corporation), laid down the first tugboat in a series of Project 00440 ships ordered by Amur Shipyard (USC company). The lessor under the contract is Mashpromleasing, a subsidiary of USC. The tugboat was designed by Vympel design bureau (also a USC company). Amur Shipyard is going to deploy its new tugboats for moving newbuilds to Vladivostok for outfitting, sea and mooring trials with further delivery to the customers, as well as for providing of towing services. The lead ship is to be built in 2019 with the second one to be completed in 2020. 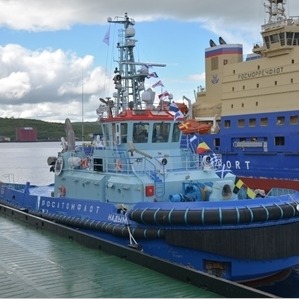 Portoflot project foresees the construction of three ice-class tugboats, one port icebreaker and one icebreaking tugboat. OOO Craneship (Temryuk) and PAO Vyborg Shipyard (Vyborg) are involved in the construction. The contract for Portoflot services signed with OAO Yamal LNG covers the period between 2014 and 2040. Tugboats Pur, Tambey and Yuribey have already been built under the Portoflot project.

In August 2018, Nevsky Shipyard (Nevsky Shipbuilding and Ship Repair Yard) signed a contract with AO Sakhalinlizingflot for construction of two ice class freight/passenger ferries of Project PV22 to be deployed on the Sakhalin-Kuril Islands route.  The ships designed by Marine Engineering Bureau-Design-SPb are to carry up to 146 passengers, general cargo, including refrigerated and packaged dangerous cargo. The ship features a larger hold (895 cbm vs 208-215 cbm on ferries of previous projects. Ferries of Project PV22 can carry 24 containers (including 8 refrigerated containers) and 6 passenger cars. 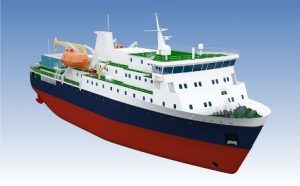 On 21 June 2018, Narimanov, Astrakhan Region based JSC Lotos (part of CNRG Group, a division of United Shipbuilding Corp.) laid down the second paddle cruiser of Project PKS 180 Golden Ring ordered by Goznak-Leasing CJSC for Volgaservis LLC (for 180 passengers). The lead ship of the series was laid down in January 2018. Lotos shipyard will build two paddle cruisers of Project PKS 180 Golden Ring for Gama LLC under the subsidized leasing programme for passenger ships.

Nizhny Novgorod based Shipbuilding Company “AEROHOD” and Russian River Register completed testing hovercrafts of Project А20П, Yugorsky-8 and Yugorsky-9 following which they were sent to Khanty-Mansiysk to join the fleet of Severrechflot.

In April 2018, Zelenodolsk plant named after A.M.Gorky laid down two pleasure cruise boats of Projects 03620 and 03621 with passenger capacity of 250 and 150 accordingly. 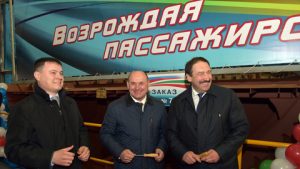 In general, two facts are obvious: the revival of Russian shipbuilding is underway due to active role of the state both as a direct customer and a supporter of private companies through a package of dedicated measures. The share of state defense orders in the total volume of shipbuilding backlog tends to decrease. According to USC, the corporation will achieve a parity between civil and military products within the coming nine or ten years.

A separate problem is a high share of imported equipment for ships. To prevent the development of Russian shipbuilding as a “screwdriver industry” which doesn’t do much to contribute to the GDP growth, a center for phasing-out imports of shipboard equipment has been established in the Russian Federation (see our previous story http://en.portnews.ru/comments/2611/)

Crowley continues strong start to 2019 with arrival of 1,500 new containers