The BDI (Baltic Dry Index) loss was a bit contained today, just 23 points but on a weekly basis the loss was a triple-digit one: 260 points from 905 of last Friday the 25th of January. Geopolitics still in disarray. John Faraclas’ daily and weekly recaps:

The Supras’ BCI loss was  steady AND substantial; on a daily basis the loss was 22 points – now reading 450 points and on a weekly 126 – from 576, another triple digit loss!

The Wets on a falling mode, but more “sweet” losses; the last published BDTI (Dirties) and  BCTI (Cleans) stood at 848 and 653 minus 11 and six points respectively. On a weekly basis the Dirties lost 27 points – down from 875 and the Cleans were down 115 – from 668 respectively.

Another bad week has gone by and wonder, really wonder, what’s next; the BDI is minus 1,602 points since the end of Dec 2013 when the BDI stood at 2,247 points… The Wets too are not in the expected level of at least 1,000 points each and despite some wishful thinking with Venezuela and other factors they remain on the low side. All in all a very bad start for 2019 and lets see after the Chinese Celebrations for the Year of the Pig what is yet to come… The Cold War is back – see in our Geopolitics  mini analysis/info herebelow… and  this will affect Shipping and Transport and conversely the intermodal chain…

Did I hear you  say Container trade? Well, after a disappointing 2018 – save ten centum of “good” times all through and 90 centum bad times , 2019 promises to be an uncertain year; CAUTION!

The Environment and its various issues such as scrubbers do add to the bad state of the markets but some clever and wise managers did the trick… Excellent!

Geopolitics about to create tsunamis as..:

The MIGRANTS: The Wall to secure the USA from  illegal MIGRANTS its to go ahead… Watch this space…

In the Mighty Continent the situation becomes unbearable thanks to Brussels dirty and double faced policies. I wish for example Frau Merkel to have emanated from the Island of Lesvos and live the devastation there as well as the inhumane conditions MIGRANTS live with there; not to mention what the locals have to live with… fear beyond fear.  We have appropriately documented this despicable mess. It is about we shot out this mess; all the rest is, with all due respect:  Bullshit – excuse my French but this American expression fully correlates with the current situation. We repeat our position as every delay works against our security and social cohesion: Impose a Naval Blockade from Agadir to the Evros River in Greece, with a Mandate and Rules of Engagement… They have now started crossing over to the UK… ENOUGH!

Add the Balkans and East Med/ Black Sea mess and see what you get AND what is further to come!

Russia and Ukraine at odds, Turkey bullying everybody in the region – 1,500 km around its frontiers including blackmailing all, Greece in internal and external mess… Cyprus under threat with its oil and gas wealth… The Middle East Wars with Syria and Iraq and the Kurdish issue coming up and might shake the region…

Europe in tatters with BREXIT whatever happens… We have on canvas warned you about the outcome of any type of BREXIT… Read our back reports and see what we mean and compare us with the hoi polloi… BREXIT has been all along a very enigmatic and perplexed issue; directly with Europe, the Northern Ireland border, even Gibraltar surfaced… AND there will be more issues to come up but same MUST NOT harm the public from  both sides of the Channel and in the Irish Sea!

The EU in general is heavily “indebted” to the financial world. All in all US$ 30 Trillion in red…  Germany, France, Italy and the United Kingdom – “still” in,  are in a very bad state with their finances… yet Germany  and its cronies, the Brussels clan for example, knows well how to bully Greece for example… Let’s see how Italy will  “develop” its finances… Tough times ahead and it’s not just the North and South divide, all of the EU is in a mess… Just wait and see…

The USA suspends its obligations under the INF agreement and we expect Russia to follow suit. Back to square one with whatever this entails… Meantime the cold weather claims 21 deaths!

In South America Venezuela will become a dangerous, more than any of your wildest dreams; four blocks have different views: One supporting Maduro – the usual suspects, one  recognising Guaidó even as an interim president, another one  – basically the EU demanding new elections and the fourth one without a clue – the entire Africa continent… Expect mess. Let’s see how the USA supports Guaidó ! All South and Latin America nations are on red alert trying to avoid a spill over. Interestingly, Turkey supports Maduro!!!

In Africa now; in Ghana they are faced with a major problem as the USA imposed visa restrictions on Ghana for refusing to accept the return of  about 7,000 Ghanaian nationals that it wants to deport!

In the  Far East now and look that a big deal has been signed between Japan and the EU! It is one of the Planet Ocean’s  biggest such deal and same covers nearly a third of global GDP and 635 million people. Well done; but what about the United Kingdom “moving” away from the European Union…?

Wonder what China can do with the USA’s sanctions in this new Trade War; can China sustain these sanctions…

Japan is closely watching the situation as well as that with North Korea and Taiwan…. Add also the desire of the Chinese in the South China Sea and see what you get; too many nations involved there…. A melee to be watched…

On all the above issues one must take on account Putin’s Russia agenda; a tough one… CAUTION…

Reading this brief report / recap and adding the US$ 250 Trillion of Planet Ocean’s debt you can see how difficult the situation for shipping’s stakeholders becomes… Who will control the Sevens Seas’ Trade? Eh! 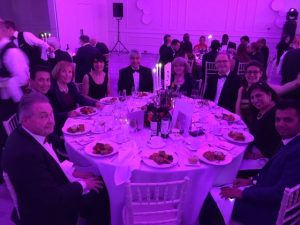 On another tone and note, the AMBA* Excellence Awards & Gala Dinner 2019 was an exceptional and interesting event. A full house at the London Marriott Hotel in Grosvenor Square, the very familiar Marriott from the Oinoussian Benevolent Fund over the years event with a global representation! Our table, the Blue MBA of the Copenhagen Business School in front central stage had most of shipping’s sectors stakeholders. For a minute due to the announcement we and all present we thought we had won. We and the entire room jumped but…

The candidate from Copenhagen Business School, Captain Prashant Widge got the Highly Commended Award plaque and we hope next time round CBS will lift the top trophy / award. Interesting networking at the reception, good food and drinks and great company exchanging views on the shipping industry and beyond –  BREXIT included. Many thanks and congratulations to  Irene Rosberg, the Programme Director, Executive MBA in Shipping and Logistics (The Blue MBA) at the CBS for this and other successful events raising the image of the 100 plus years old Academic  Institution! 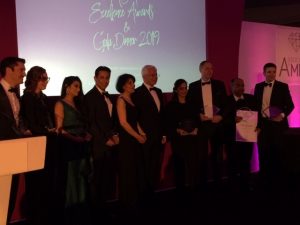 All winners and runner ups on stage

Next stop in Istanbul  for AMBA’s Global Conference 13-15 May and afterwards  in Viena 1-2 July for the Business School Professionals Conference.

Will revert with a full write up and more pictures soon on all six Awards and more!

Have a nice evening as well as a nice weekend and continue to remain on guard from actions emanating from Pirates, Terrorists, Criminals and Business Hooligans whatsoever wherever you are on Planet Ocean!

Desmond Lachman on US monetary policy, Danae Kyriakopoulou on Banxico independence and more