Vietnamese Art: between Asia and the Western World 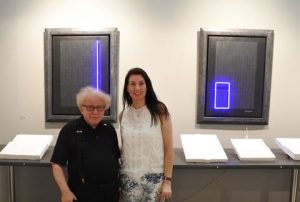 Vietnamese Art: between Asia and the Western World

Modern Vietnamese art inherits rich elements from a culturally diversified past. Starting with the world-known bronze drums and impressive artilleries of the Au Lac kingdom three centuries ago, it descends through the ages to the works of the Ecole des Beaux-Arts of Indochina painters, created in the capital city of Hanoi in 1925. Thus, Vietnamese cultural tradition is clearly characterized by the fusion between the Orient and the Occident.

Vietnamese art has not received the recognition it deserves, especially during the civil unrest of the late 20th century. Luckily, this situation has been changing during the last years and Vietnamese art has been experiencing a new spring. In the following pages, the authors present their findings on modern Vietnamese art, placing them in the timeframe of a 2,000 year old civilization.

Emphasis is given on the iconography works portraying remarkable landscapes, including peasant scenes of country life, as well as religious and civilian monuments. The art selected are from Vietnamese museums as well as European museums and private collections like this one.

The Charalambous collection is important, not only because of its historical significance but also because it aspires to further the understanding of Vietnamese culture for posterity. It incorporates works from renowned and mid-career artists whose works have been displayed in significant exhibitions and distinguished private collections and public institutions all around the world as well as young emerging artists who continue to tackle classic issues with fresh and new interpretations.

This collection will enable both students and the public in general to be exposed to the artistic expression and creation of an important generation of contemporary Vietnamese artists. Also explores hidden histories of Vietnam imaginatively through the eyes of children. The works not only display historical events but portray the artists view, feeling and narrative of these events, through the language of painting.

Vietnam was invaded and subsequently ruled by the Chinese from 111 B.C. to 939 A.D. Vietnamese art was unavoidably influenced by Chinese techniques, these thousand years Chinese imperialist rule. Thus, Vietnamese artists began to practice calligraphy, painting, and poetry, and created works out of porcelain, lacquer and terracotta. Painting incorporated themes of large landscapes, mountains, animal life and calligraphy – all influences of Chinese art.

Independence from Chinese rule came in the 10th century. Vietnamese art blossomed from the 10th to the 15th century, under the Ngo-Tran dynasties. Paintings, poetry and pottery were all influenced by adapted Chinese philosophies. Not surprisingly, the 11th century is considered to be the golden age of Vietnamese art. Under the Ly dynasty, artists created astonishing ceramics that were sought-after all over Asia. Traditional and iconic landmarks were also erected during this historical period. 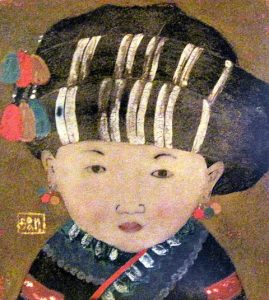 The country was invaded again by China in the 15th century. The occupation was short but brutal. Many classical Vietnamese books and works of art were destroyed, resulting in a tragic loss of documentation from this and past eras. This time, Vietnamese art was heavily influenced by the artistic creations of the Ming Dynasty and native works were largely abandoned. After the liberation, interest in porcelain and ceramics was revived under the Vietnamese dynasties that followed. Vietnamese ceramics flourished from the the 15th to the 19th centuries when they were exported all across Asia and displayed in royal courts. 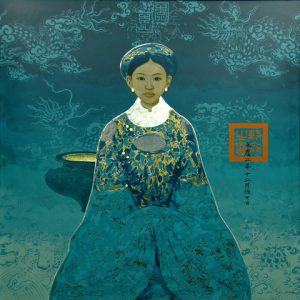 When the French descended into Vietnam following their imperialistic policies during the 19th century, Vietnam once again fell prey to a foreign nation. The French founded art schools in major cities where European art methods were introduced to Vietnamese artists. As a result, French art influence was concentrated mostly in Hanoi and Saigon. Local artists started experimenting with the use of traditional materials such as silk, lacquer and oil to create European-style artworks. This resulted in a stunning fusion of East and West, where talented artists created spectacular silk and oil paintings, usually depicting pagodas, the countryside, and Vietnamese historical events. However, the French imposed austere travel restrictions on Vietnamese nationals and thus only artists from wealthy families were able to travel to France to advance their careers. Artists who were not allowed to travel outside the country include the renowned Le Thi Luu, Le Pho, Mai Trung Thu and Pham Tang. 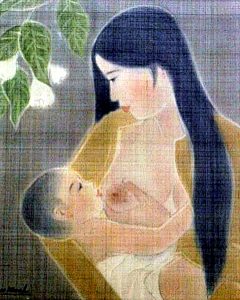 Craig Thomas, founder of Craig Thomas Gallery in the city of Ho Chi Minh, in an interview to Culture Trip on the revival of traditional art techniques in Vietnam notes: “The most obvious example [of the fusion of modern/traditional] is the revival of water color on silk painting in Vietnam that has taken place over the last decade. This traditional medium had largely fallen into irrelevance and cliche but has recently been reinvigorated by artists like Le Thuy, Bui Tien Tuan, Chau Giang and many others”. He then goes on to point out how modern artists address social and political issues through their creations: “Corruption is a theme that certain artists have chosen to make a focus of their work. There are lines – not always clearly defined but definitely existing and respected – that the artists know have to be worked with in if they want their work to be shown publicly without issue”.

Art in Vietnam has been exposed to a turbulent history; it has not only survived but it has also incorporated unique elements that rightfully place Vietnamese artists on the international artistic stage. 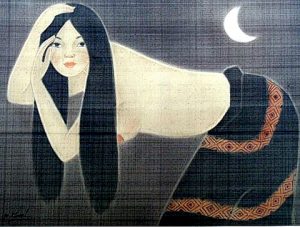 The Kanellos Charalambous collection reflects the lands the successful doctor travelled, the places he visited and cherished that influenced him in the formation of his collection. They bear witness to the inevitable connection of the collector to Vietnam, its people and, above all, their art. This is a collection created by a deep love for art, with passion and dedication, starting from the professional travels of Dr. Charalambous to attend medical conferences and culminating in the completion of his endeavor.

The collector expresses himself through his rich collection; objects are getting life and become self-existent. The chromatic variations, the plurality of materials (woodcuts, etchings on paper, ink on paper, wood panels, acrylics, acrylic on paper, watercolors, oil on canvas…), figurative art and the blending of diversified elements are infused by an internal structure. Dr. Charalambous assimilates influences and varied stimuli, situated at a crossroads of worlds and intense spiritual creation. With his collection, he primarily collects, preserves and presents to the American public the works of older and newer Vietnamese artists, presenting their work and creating a legacy for generations to come.