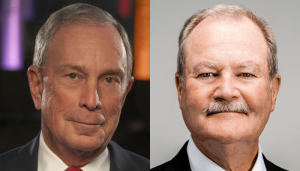 The former three-term mayor of New York City and founder of Bloomberg LP and Bloomberg Philanthropies will take part in a “fireside chat” with Bermuda Premier David Burt moderated by AIG’s Duperreault at the multi-industry forum, the latest in a series hosted in different cities by the Bermuda Business Development Agency (BDA). The “Bermuda Executive Forum New York” takes place Thursday, March 21 at Convene at 117 West 46th Street.

“The visit to New York by Premier Burt and the BDA underscores the importance of the US-Bermuda relationship and promotes opportunities to further develop initiatives that are mutually beneficial,” said US Consul General to Bermuda Constance Dierman. “The United States and Bermuda have enjoyed sustained ties for over 400 years, and our shared history has forged a strong relationship. Today, there are over 8,000 Americans who live and work in Bermuda and a half-million people from the US who visit Bermuda each year. The US is Bermuda’s most significant trading partner, accounting for more than 70 percent of all imports, and Bermuda is an important, strategic partner to the US in many areas-including insurance, law enforcement, border security, aviation, space, marine research, and education.”

The forum will mark the second time Bloomberg has participated in a BDA event. In May 2017, he addressed a forum of senior business leaders at Bloomberg LP in New York, highlighting the special role Bermuda plays in the global economy. Duperreault, the Bermudian market veteran who currently holds AIG’s top role, was the keynote speaker at the BDA’s first New York forum last May, detailing the island’s unique combination of experience, quality and innovation to a packed audience of close to 300 attendees.

Premier David Burt will be joined at this month’s full-day event by Bermuda Finance Minister Curtis Dickinson and more than 40 leading industry and regulatory executives who will take part in moderated panel discussions on global industry trends and the advantages and opportunities for business in Bermuda.

Bloomberg, who will join the Premier and Duperreault for the day’s kickoff session, founded a start-up tech company, Bloomberg LP, in 1981. Building desktop computers and connecting them to an intranet he created that provided real-time financial data and news, he revolutionised the investment industry; the company has grown from a one-room office to nearly 20,000 employees in more than 120 countries. Bloomberg served as New York’s mayor from 2001-13. He has been appointed the United Nations Secretary-General’s Special Envoy for Climate Action and the World Health Organization’s Global Ambassador for Noncommunicable Diseases. Bloomberg Philanthropies, which encompasses his charitable activities, focuses on five key areas: arts, education, the environment, government innovation and public health.

Duperreault spent 30 years working in Bermuda and the United States in senior executive roles at Marsh & McLennan Companies, ACE Limited, and AIG, where he started his career. He was appointed President and CEO, and to the Board Directors of AIG, in May 2017. Previously, he was chairman and CEO of Bermuda’s Hamilton Insurance Group, which he established in 2013.

“We are thrilled to welcome Mr Bloomberg and Mr Duperreault to our New York event,” said BDA CEO Roland Andy Burrows. “They are both iconic and influential business leaders whose contribution to our event’s discussion and thought leadership will be invaluable and underscore Bermuda’s respected reputation as an innovative, blue-chip financial centre. We look forward to their participation.”

The March 21 event, running 8am to 5:30pm, followed by a networking reception, will be a valuable forum for prospective investors and professionals interested in learning more about Bermuda’s world-class market. Panelists will debate topics ranging from Brexit to US tax reform to climate change, along with industry trends affecting a wide gamut of sectors, from long-term, healthcare-liability, captive and cyber-risk insurance to alternative asset management and the impact of disruptive technologies on global finance.

“As the world’s risk capital, Bermuda has been a critical partner to the New York economy, disproportionately supporting the region’s financial resilience from events like Superstorm Sandy and the 9/11 tragedy to emerging risks like cyber,” said Stephen Weinstein, the BDA’s Deputy Chair and global chief legal officer for RenaissanceRe Holdings.

“Bermuda’s many synergies and reciprocal relationships across other sectors with New York and other major US markets also merit recognition,” noted Weinstein. “The forum promises to be an exciting opportunity for attendees to connect with leaders from Bermuda’s public and private spheres, and to learn about opportunities to collaborate in both Bermuda’s traditional areas of excellence and emerging areas of innovation.”

Panamaxes “join” Capes in pulling down the BDI@657